Karl Gordon Lark, Distinguished Professor Emeritus at the University of Utah, passed away on April 10, 2020, after a seven-year battle with cancer. A renowned geneticist, Lark uncovered fundamental aspects of DNA replication and genetics across many systems, from bacteria to soybeans to dogs. He came to the U in 1970 as the biology department’s inaugural chair with a vision—to build a research and teaching powerhouse in the desert. In just six years he recruited 17 faculty members from all biological disciplines, establishing an institution of scientific excellence.

“Today, the tremendous impact of Gordon’s vision and leadership are felt in the School of Biological Sciences, across campus and throughout the state of Utah,” said Denise Dearing, director of the school. “Gordon was responsible for the expansion of molecular biology—a new field in those days—across the U. He will be dearly missed.”

“The [University of Utah’s] nascent research community, in every field from molecular biology to community ecology, was built by Lark in creative, often wildly unconventional small steps,” wrote Baldomero “Toto” Olivera, Distinguished Professor of Biological Sciences, in an unpublished essay for the Annual Reviews of Pharmacology and Toxicology. Olivera conducts world-renowned research on cone snail venom and pain management, and was recruited by Lark. “It is his guidance that makes me feel unconstrained in exploring unusual solutions to seemingly intractable problems.”

Lark was preceded in death by his first wife, Cynthia (née Thompson). He is survived by his four children, Clovis, Ellen, Suzanna and Caroline and his granddaughter, Willow. He is also survived by his second wife, Antje Curry, his stepdaughter, Tara, and her two children, Liam and Briar.

A life of inquiry 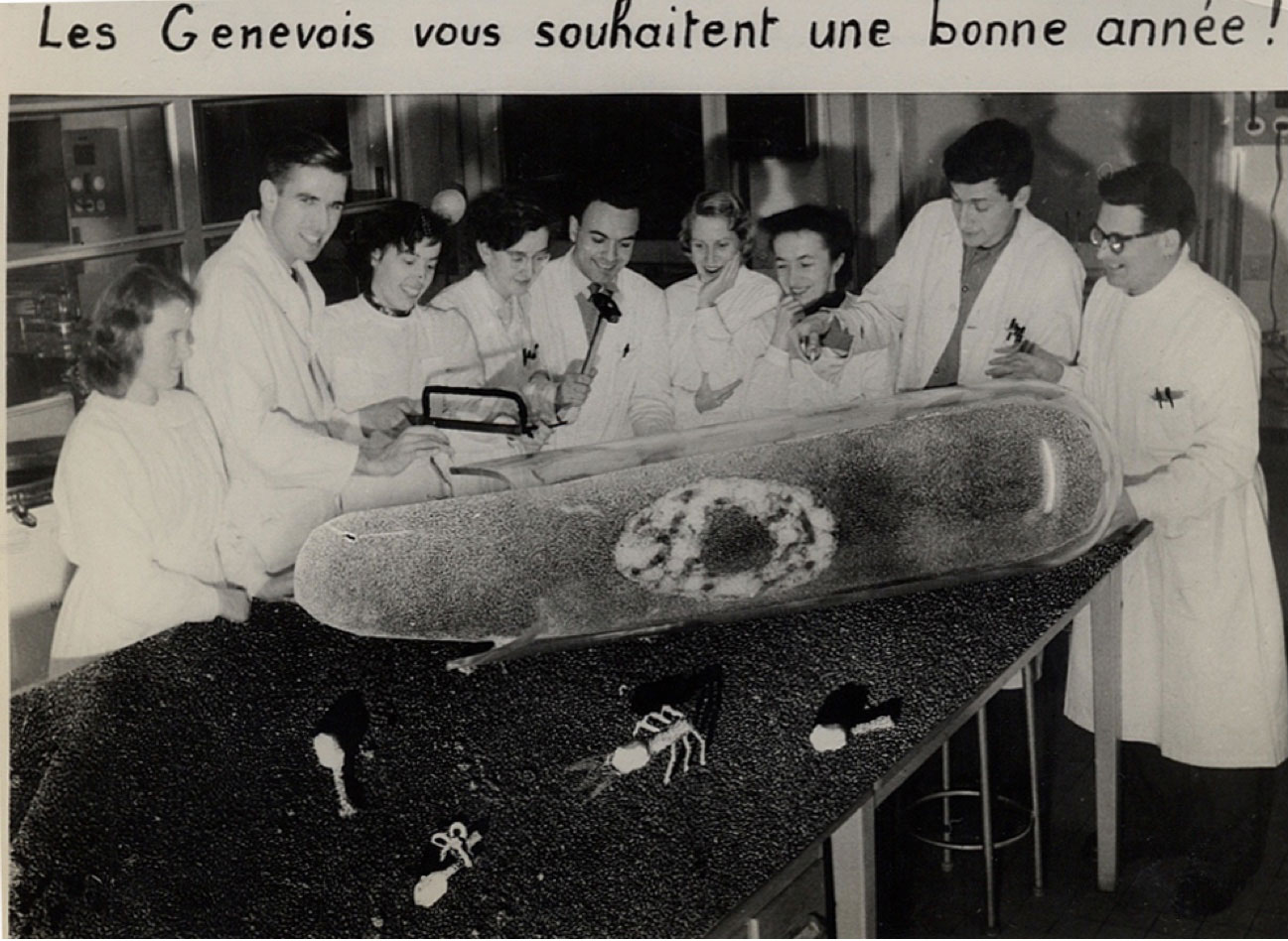 Edward Kellenberger’s (right) research group in 1955. Then 25-year-old Gordon Lark (second from right) during his postdoc days in Kellenberger’s lab at the University of Geneva. Grete Kellenberger is left of Lark. At the time, the lab studied intracellular development of bacteriophage T4 after infecting its host, the bacterium Escherichia coli. The group had the first electron microscope in Europe, manufactured for them by a Swiss company, just for their laboratory needs. Kellenberger doctored the photo to appear like they were cutting directly into the T4 phage-infected E. coli that they were studying for a New Year’s Card.
The man in the middle (fifth from right) is then-graduate student Werner Arber who won the Nobel Prize in Medicine in 1978. Arber remained very good friend with the Larks.

Curiosity and coincidence guided Lark’s lifelong pursuit of discovery. He was born on Dec. 13, 1930, in West Lafayette, Indiana, into a household that valued intellect. His father was physics chair at Purdue University and his mother was an artist and psychiatrist. Lark was precocious in his academic pursuits and enrolled at the University of Chicago a year after World War II ended at the age of 15. There, he met Leo Szilard, regarded as the father of the Manhattan Project but who had turned his attention from nuclear reactions to the newly emerging field of the molecular basis of life. Szilard suggested that Lark spend the summer at Cold Spring Harbor, a famous laboratory that helped develop the field of molecular biology. There, Lark met Mark Adams, a scientist from New York University who would become Lark’s mentor.

Adams studied phages, which are viruses that invade bacterial cells and take over various host functions to propagate themselves. He not only inspired Lark’s love of research, but also taught him how to organize effective undergraduate science education. In the fall, Lark returned to Chicago to complete his degree and had his first eureka moment—he discovered reversible changes in the physical structure of phage proteins. It would be about four more years before the field generally accepted that molecules could change a protein’s shape.

“To this day, I think it’s one of the best pieces of science I’ve ever done,” Lark reflected in comments to the U’s American West Center. “It was the bringing together of physics and chemistry and biology into one moment. I didn’t think of it that way at the time, but from then on I was hooked!”

Lark returned to Cold Spring Harbor in the summer of 1950 to work with Adams, and there he met his future wife and scientific collaborator, Cynthia. Lark completed his doctorate at NYU, spent two years as a postdoc at the Statens Serum Institut in Copenhagen, Denmark, and one year at the University of Geneva. On subsequent return visits, he met Costa Georgopoulos, a biochemist who discovered a new class of proteins called chaperones. More than 20 years after they first met, Georgopoulos would move to the Department of Biochemistry at the U.

“Gordon and I shared many old friends and colorful memories from our times in Switzerland,” Georgopoulos remembered. “Gordon’s nickname in the lab was ‘double-decker’ because his plentiful, high-rising hair resembled a double-decker bus.”

In 1956, Lark accepted a position at St. Louis University Medical School. Here, Lark had what he called his second epiphany—an experiment to show that in the absence of protein synthesis, replication of DNA stopped at a particular point on the bacterial chromosome. The experiment set the course of his research for the next two decades. In 1963, the Larks moved on to the physics department at Kansas State University where they focused their research on the process of DNA replication in bacteria. They pioneered how to measure the point when DNA begins replicating, how to track the progression of replication in living cells and developed the technique of measuring the size of cells before they begin to replicate. In 1965, the American Association for Microbiology honored Lark with the Ely Lilly Award, given each year to recognize landmark research in microbial physiology. 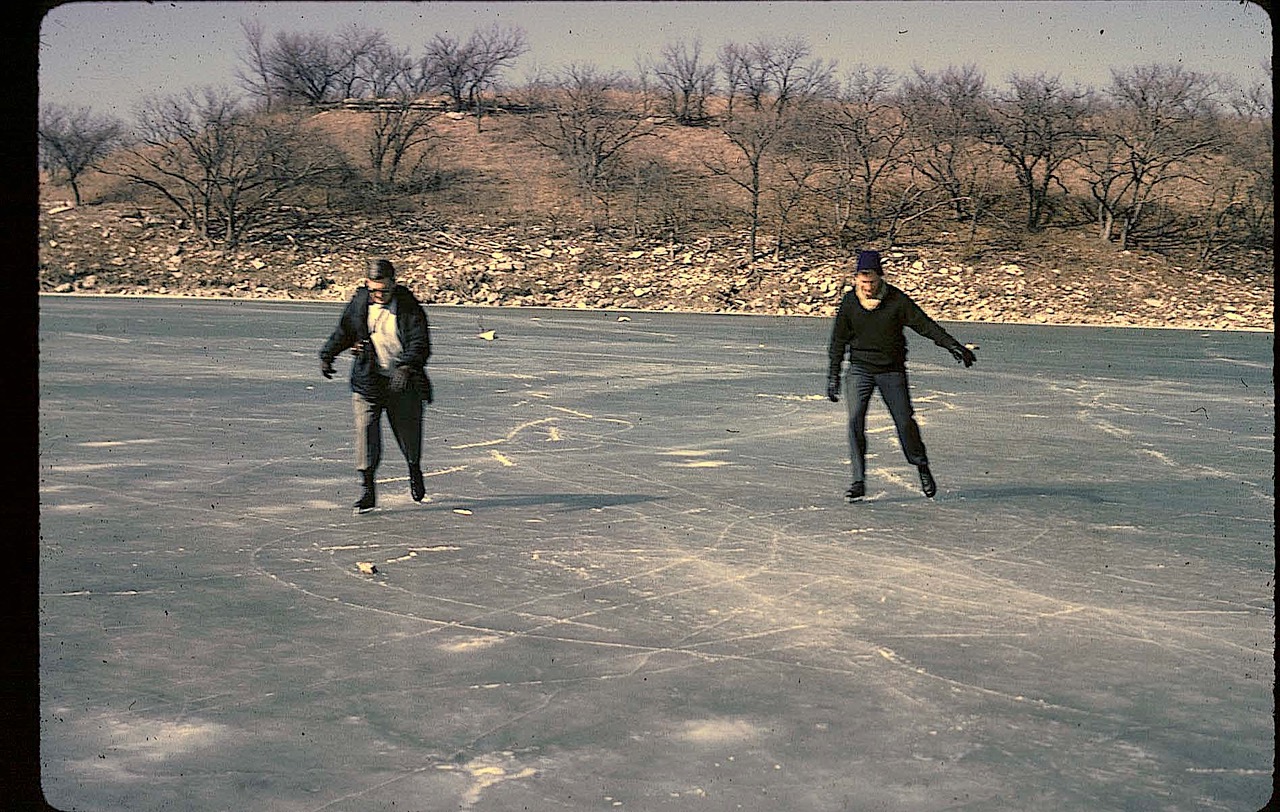 In 1970, the U’s Robert Vickery recruited Lark to build a powerful new biology department in what would become the School of Biological Sciences in 2014. And build he did. During his time as chair from 1970-77, he hired 17 new tenure-track faculty, including Mario Capecchi who would subsequently become a Nobel Prize laureate, Raymond Gesteland and Ray White, who went on to establish new departments in the School of Medicine.

“As chair, Gordon was an unusually skilled administrator, combining a rare insight into the environment that different members of faculty and staff needed to succeed and the energy to provide it,” said Capecchi. “I was attracted to the young Utah biology department in part by Gordon’s support of long-term studies aimed at significant problems, but without the promise of immediately publishable results, quite different from the ‘publish-or-perish’ policies imposed at many other places.”

Lark also impressed the importance of teaching to the biology faculty, both by personal example and with innovative programs. In the department’s very early days, he hired one of the world’s most charismatic young science personalities, David Suzuki, as a visiting scholar to teach the introductory course in genetics. He implemented video recordings of well-taught introductory courses so they could be offered more frequently to more students. For several years as chair, he funded an annual program in which a prominent faculty member from outside the College of Science taught a course in their own area, designed for biology students.

“During Gordon’s final years after retirement and while battling cancer, he voluntarily and unpaid taught an Honors course for a general student audience. With biographical and autobiographical readings, he introduced the human sides of pioneers in the exciting advances of 20th century physics and chemistry, several of whom Gordon had known personally,” said Larry Okun, professor emeritus of biology. “He taught that course right through 2019, his own last fall semester.”

In Utah, the Larks turned their attention from bacteria to plant cells and tissues, particularly soybeans, for the next decade. In the early 1990s, disaster and serendipity struck—the Lark lab was destroyed while the building was under renovation. After a year of trying to salvage their work, they switched to studying whole soybean plants in agricultural fields, focusing on the genetics underlying certain traits, such as the ability of the crop to adapt to different climates. Overall, their laboratory identified genes that increased the yield of soybeans by 10%.

In 1996, tragedy and serendipity struck again. The Lark’s Portuguese water dog, Georgie, had died of an autoimmune anemia disease. Heartbroken, the Larks connected to a dog breeder, Karen Miller, to buy another puppy. When the time came, Miller gave Lark the $1,500 dog for free hoping to guilt him into studying the breed’s genetics.

It worked. Miller coordinated with Portuguese water dog owners from around the country to send Lark blood samples and X-rays of their pets. What became known as “The Georgie Project,” eventually identified genes that determine the size and shape of the head, thickness of the thigh bone, shape of the pelvis and characteristics of the lower foreleg.

A legacy that spans generations

Lark formally retired from the U as a Distinguished Professor in 1999, but his legacy in biology reaches beyond his direct collaborators. The next generation of biologists also feels his influence.

“The magnitude of Gordon’s accomplishments is hard to really capture in today’s world,” said David Grunwald, professor of human genetics at the U’s School of Medicine. “Individuals can have a big effect on an institution. They can either set a precedent that honors creativity, respect and excellence, or they can make everyone feel like a cog in a machine. Gordon built a place that engendered creativity.”