The future of Great Salt Lake

University of Utah President Taylor Randall and Brad Wilson, speaker of the Utah House of Representatives, met with legislators, scientists and Great Salt Lake advocates on June 23, to spark conversations to help save the lake, which reached its lowest recorded level last year.

“It’s a hemispheric event,” Randall said of the decline of the lake, recently featured by the New York Times, “occurring right here in the state of Utah.” 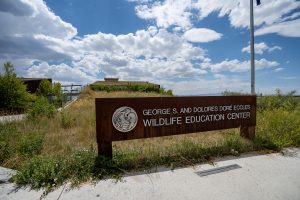 The meeting, part of the first leg of Randall’s Utah Across Utah Tour, took place at the George S. and Dolores Doré Eccles Wildlife Education Center in Farmington, Utah. Outside the window, pelicans, herons, ibises and avocets flew by while the meeting participants discussed how to find solutions to save the declining Great Salt Lake on which industries and ecosystems rely.

“This is what we’re talking about, folks,” Wilson said, gesturing to the ponds outside the window and the mountains of Antelope Island in the distance. “I grew up next to the Great Salt Lake. So it’s not just important to me from my legislative role, it’s important to me personally.”

After outlining the threats to Utah’s economy, health and quality of life from a declining lake, as well as the actions taken in the 2022 Legislative session, Wilson turned to the group, which included leaders of the Friends of the Great Salt Lake, the Great Salt Lake Alliance and Great Salt Lake Advisory Council, hydrologists from the U.S. Geological Survey, U atmospheric scientist Kevin Perry, Dean of the U College of Science Peter Trapa and others, including leaders of the Utah Department of Environmental Quality and Utah Department of Natural Resources.

“What can we all do around this?” Wilson said.

Utah Senate President Stuart Adams echoed the call for solutions. “You’re very smart people,” he said. “I’d like to know your highest priorities. If we can somehow put that list together of serious ideas, we can have a clearer path.” 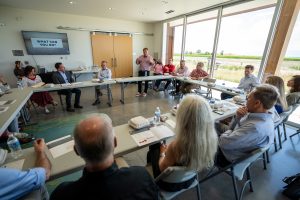 Rep. Ray Ward explored the concept of a baseline or other simple metric of the lake’s level and condition that could help the general public understand current conditions.

“We could think of what would make sense for a baseline and then speak of it in terms of the amount of water that’s already gone compared to that,” he said. “If we are able to say, ‘Look, it’s not something that’s happening in the future.’”

Randall mentioned the wide range of expertise at the University of Utah related to various aspects of the Great Salt Lake, and Trapa added that the U’s expertise in Utah’s environmental issues, including wildfire risk and air quality, has been built in the state’s natural laboratory. “Higher education is uniquely positioned to leverage our expertise for exactly this: helping provide prioritization of ideas and solutions,” he said.

Representative Tim Hawkes commented on lawmakers’ hunger for good data to help make decisions. “So for academia to really feed into that,” he said, “we need the academics to identify, to understand, what those critical research questions are, help us answer them, and then feed that back to policymakers who are just begging for good information.” 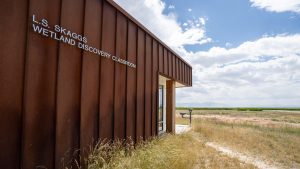 Perry, who has extensively studied the potential for dust generation on the dry lakebed, contributed a benchmark data point. Based on his studies, the Farmington Bay area of the lakebed, which has the greatest potential to impact residents as a dust source, is the easiest quadrant to remediate by raising lake levels. “But unfortunately it’s [by] 10 feet,” he said. A lake level elevation of 4,200 feet “would cover 80% of the dust hotspots that I’ve measured out here in Farmington Bay itself.”

In response to a question from Rep. Ward about quantifying the amount of water needed to maintain healthy lake levels, hydrologists Christine Rumsey and David O’Leary from the U.S. Geological Survey previewed upcoming webtools and models of the lake in development. “The intent of that is to integrate groundwater levels, lake levels, evaporation and surface water inflows to get at some of those questions,” O’Leary said. Rumsey added that a tool to help the public understand the impact of lake level on lake resources is coming this summer.

Other participants raised water pricing, reserving a portion of water for the lake and education as additional potential solutions.

“We obviously are all committed to this issue here for a variety of reasons and all the right reasons,” Wilson said in closing. “I’m not going away on this issue and I know that you aren’t. Let’s continue to work together and find solutions. . . We’ve consistently been able to do things that seem really, really hard. This is one of those. It might be one of the biggest. But it’s well worth the effort.”