A historic building on campus is being fortified, and its iconic rooftop featuring large block letters spelling out “UTAH” is not going anywhere.
Wes Mangum - marketing and communications specialist, Planning, Design & Construction and Facilities Management

The Einar Nielsen Fieldhouse and its rooftop display of school pride are currently undergoing structural improvements. These upgrades will allow the storied building to continue to serve campus into the future.

The crimson “UTAH” lettering with reflective white trim on the fieldhouse is a prominent part of the game-day atmosphere and fan experience at Rice Eccles Stadium. In the five years since its installation, this feature has become a fan favorite. It’s here to stay, as director of athletics Mark Harlan reiterated.

“The UTAH lettering on the roof of the Einar Nielsen Fieldhouse has become a recognizable part of the identity surrounding Rice-Eccles Stadium,” Harlan said. “It is very important to us and to our fans that it will return as soon as the work on the roof is completed. The story of how the name was originally painted on the roof shows the type of support and passion our fans have for their beloved University of Utah. While that iconic lettering will not be on the roof during our 2020 season, we are excited that this tradition will be preserved going forward. When the Rice-Eccles Stadium expansion is complete next summer, and the new Ken Garff Performance Zone debuts for the 2021 season opener, it will be fitting that the recognizable UTAH lettering on the Einar Nielsen Fieldhouse roof will be visible again.”

General contractor Layton ICS and project architect Method Studio are teaming up to make the fieldhouse safer and sturdier. Structural upgrades that will improve the building's resistance to earthquakes are underway. This includes roof work requiring exterior access, resulting in the temporary removal of the roofing and the accompanying letters. The current construction on the roof is expected to be completed in early 2021, after which the letters will be repainted in the spring.

The letters originally came about through an idea on an online fan forum that took off and reached a culmination in a rapid crowdfunding movement in 2015. Ben Leaver originally floated the idea for the letters. Another University of Utah football fan, local resident Mark Sargent, took the idea and ran with it.

Sargent approached an acquaintance in Facilities at the university who put him in touch with employees that would know more about the necessary process to make the letters a reality. Sargent found himself presenting the idea to a review council in Facilities, using posters from Costco featuring an image created by local graphic designer Justin Dahl showing the letters on the roof. If Sargent could get permission to move forward, he’d raise the funds for the project. One member of the review council remarked that the letters were reminiscent of a feature at the old historic stadium, providing a throwback feel. The next day, Sargent received a phone call from former athletic director Chris Hill giving him permission to proceed with fundraising for the cost of the letters.

Sargent created a GoFundMe post online and shared it with his Twitter followers, which numbered around 300 strong.  The idea, and the fundraising post, took off like wildfire. In the span of 24 hours, Sargent had made appearances on local radio and television shows and the fundraiser had reached its goal of $15,300 through 348 donations by Utah fans. The final push for the fundraiser came in the form of a generous $2,848 donation from basketball legend Keith Van Horn. Painters were dispatched to the roof to place the 50-by-45-foot letters in time for the 2015 football season opener against Jim Harbaugh and Michigan. Utah won, 24-17, with the fieldhouse and its letters looking on in the background.

“The first time that I saw it, driving up that week and seeing the progress, and seeing it during the pregame hype (against Michigan), it was absolutely chilling,” Sargent said. “It immediately felt like part of the game-day atmosphere. It’s as if it should have been there the whole time.”

While the rooftop letters have a short history, the Einar Nielsen Fieldhouse has been a campus fixture for 81 years. Opened in 1939 and dedicated in 1940, the fieldhouse has seen a lot. It housed two national championship basketball teams—the Utah men's team led by coach Vadal Peterson won the 1944 NCAA tournament and the 1947 NIT tournament. At the height of WWII in 1943, it even served as a dormitory for over 1,000 soldiers. The fieldhouse was named after legendary athletic trainer Einar Nielsen, who kept athletes healthy for over 40 years. Following the construction of the John M. Huntsman Center in 1969, the fieldhouse became the home of campus recreation until 2015. Currently, the fieldhouse houses a chilled water system that provides cooling for the campus, as well as studio spaces that are used by architecture, dance and theater classes.

The current construction on the fieldhouse also includes an upgrade to the fire protection system. Construction is broken into two phases: Phase 1, featuring work on the main building and roof, will be completed in early 2021. Phase 2, with seismic and fire protection systems upgrades as well as building circulation improvements, will wrap-up prior to the Fall 2021 Semester. These improvements will allow the fieldhouse to continue to serve the campus community in the future, as well as to boldly display the iconic letters.

The construction teams have faced some interesting challenges and discoveries that come with working on a historic building.

“People don’t build like they used to, with the brick facades and the roof detail,” Layton ICS Superintendent Matt Crane said. “It’s fun to see what was there and to work to give new life to it.”

“One of the challenges with working in a historic building is not knowing what you’re going to run into,” Layton ICS Project Manager Rebecca Delis said. “We’ve been missing some rebar in the east wall, and those kinds of things are always interesting to discover as you go.”

After the completion of the ongoing expansion project at the south end zone of Rice Eccles Stadium and the upgrades to the Fieldhouse, the stadium will have a new look. It will be framed by a historic building with an iconic feature—one that’s here to stay. 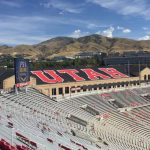 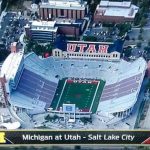 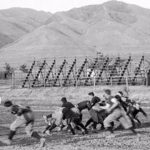 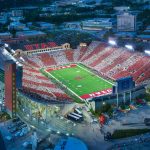 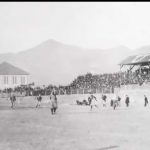