In the era of a global pandemic, symphony orchestras are justifiably concerned that live performances could prove to be risky – not only for audience members but also for their musicians.

While string musicians can wear protective face masks, those playing wind and brass instruments confront greater challenges as sound is produced by their own breath exerted through their instruments, creating airflow around them on stage.

That’s why two University of Utah chemical engineering researchers were hired by leadership at Utah Symphony | Utah Opera to conduct a series of airflow studies inside Abravanel Hall, the orchestra’s concert venue, and help identify and inform decisions on returning to live performances.

It is part of a larger plan the symphony is developing so its upcoming season starting this week can be as safe as possible for both the audience and the musicians.

Chemical engineering professor James Sutherland, assistant professor Tony Saad and a team of students spent July and August investigating the potential risk by first measuring the flow rates through the air vents of the building’s heating, ventilation and air conditioning (HVAC) system. They also obtained the air flow measurements of various wind instruments, data that was already available through researchers at the University of Minnesota.

Using high-powered computers at the U’s Center for High Performance Computing (CHPC), the two professors developed simulations of how the air flows through, and ultimately, off the stage via the HVAC system. They also developed a computer model of how emissions from each of the wind instruments, such as the trumpets, flutes, oboes and clarinets, interacted with the air flow from the HVAC system.

The goal, Sutherland says, was to find the most effective way to get the emissions from the wind instruments to flow into the current of the air conditioning system, off the stage and ultimately out of the building.

“We would look at the results of the simulation and learn this particular instrument was problematic. Then we would ask where we can move it to mitigate the risk,” says Sutherland. “We would move the musician around, and we would perform a new simulation.”

Their final recommendations for the orchestra involve moving just about every musician to a different spot on the stage to maximize the flow of their emissions out of the auditorium. They also had suggestions for the HVAC system itself to improve the flow dynamics above the stage. With all of these recommendations, Saad, Sutherland and their team learned they can reduce the potential concentration of the virus on stage by more than a hundred times.

“We have been honored to help the Utah Symphony | Utah Opera understand the risk of returning to the stage, and thanks to the power of computational fluid dynamics and high performance computing we were able to get the results in time,” Saad says. “I thank our team who have diligently worked on this and the U’s CHPC for granting us a generous computing allocation on their supercomputers.” 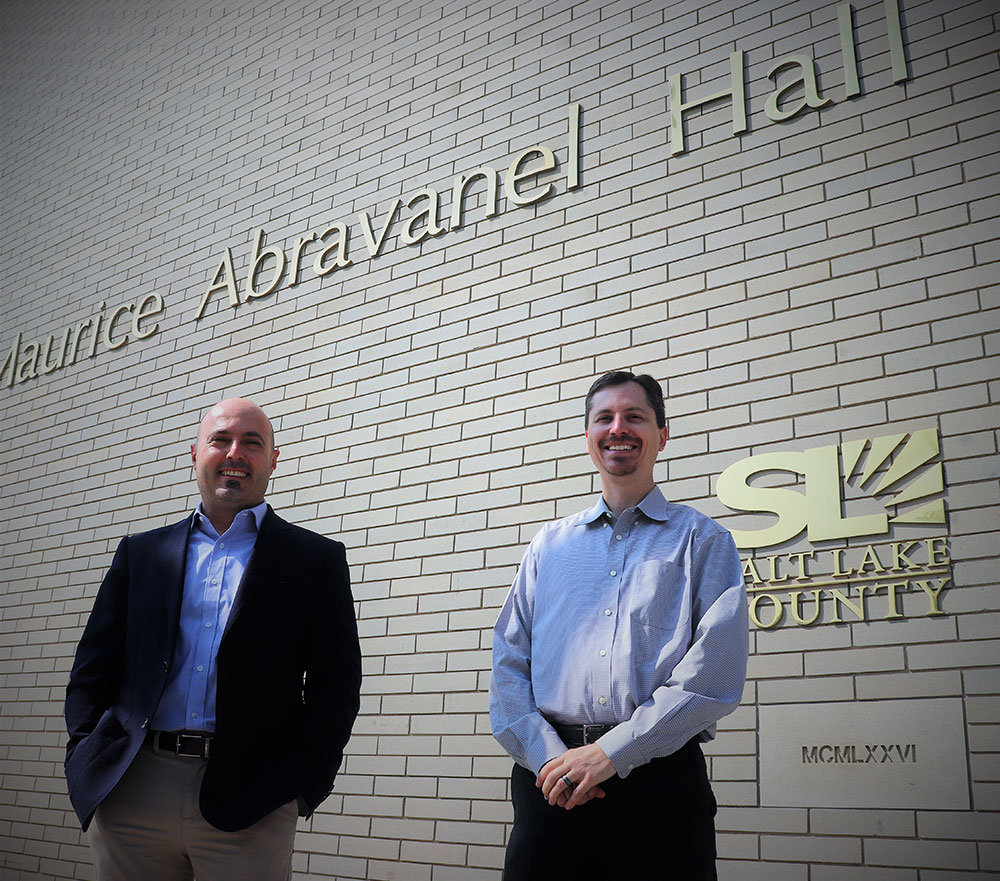 Chemical engineering assistant professor Tony Saad (left) and professor James Sutherland conducted an air flow analysis of the auditorium in Abravanel Hall, where the Utah Symphony performs, to find strategies that would help reduce the transmission of COVID-19 on the stage due to the wind instruments in the orchestra.

David Green, senior vice president and chief operating officer for Utah Symphony | Utah Opera, says the orchestra will be utilizing variations of these recommendations and those from epidemiologists depending on each performance.

“The engineers helped us to achieve the data we wanted, and we paired that with the medical science,” he says. “We now know what’s going on onstage with the air flow, and we know how to react in any given configuration. It’s been a godsend for us, and it helps not only our staff and musicians but the audience.”

The recommendations are part of a larger safety plan the organization is implementing for this year’s season, which includes reducing capacity to around 15 percent of the hall, seating audiences in every third row, keeping six feet of distance between separate households, and requiring all patrons wear face coverings at all times while inside performance venues. The programs will also be shorter in length without intermissions, however extra performances will be added to offset the smaller audiences at each concert.

Sutherland and Saad are doing the same analysis for the Capitol Theatre in downtown Salt Lake City for the upcoming season of the Utah Opera in October.

“It just takes a huge burden off me and everyone involved to have empirical evidence that shows we’re protecting people,” Patricia A. Richards, former interim chief executive and president of the Utah Symphony/Utah Opera, says about the air flow study. “We feel we have a huge obligation to the community to bring inspiration and healing at this time when people are feeling isolated. If we can do that safely, then that’s our mission.”