Accessibility Menu
Accessibility Help
Press ctrl + / to access this menu.
This piece originally appeared on the website of the College of Engineering.
“Is there life out there?” It’s the one question that has puzzled humankind for centuries.

But a University of Utah mechanical engineering associate professor and his graduate student believe they can help other scientists one day answer that question. They are developing a microchip for work in space that will be used to search for life on other planets as well as for monitoring the health of astronauts.

This “lab-on-a-chip” is a miniaturized device that takes a liquid sample and incorporates one or more analyses typically performed only in a laboratory, said U mechanical engineering associate professor Jungkyu (Jay) Kim.

“We can autonomously identify a wide variety of biological and chemical compounds utilizing our lab chip with a nanoliter (one-billionth of a liter) volume,” he said. “That is why this technology is ideal for searching for life signatures beyond Earth and monitoring astronaut health.”

To test out the device, Kim, his graduate student, Zachary Estlack, and University of California, Berkeley, graduate student, Matin Golozar, traveled to Fort Lauderdale, Fla., in May and conducted experiments with Zero-G on their Boeing 727 similar to NASA’s infamous “Vomit Comet” that can simulate weightlessness by following a parabolic flight path.

“I grew up wanting to work for or with NASA, so this has been a fulfilling opportunity,” Estlack said. “I feel that this is a project that is setting up my future career in many ways, and it is exciting to be a part of the future of space exploration, even in a small way.”

The lab chip (also known as a microfluidic organic analyzer) is jointly developed with the space science lab at UC Berkeley. The core advantage of this chip is that it’s programmable. The fluidic path is programmed to mix the samples with a labeling dye, incubate them in a storage reservoir and then transfer them to a sensor to detect biological or chemical compounds — all in a zero-gravity environment.

“The advantage of our lab chip approach is that it enables reliable analysis of samples for evidence of life, such as amino acids, without requiring samples to be returned to Earth,” Kim said. “NASA is particularly interested in planets in our solar system that show indicators of current or past water or ice. We have seen on Earth that primitive life is capable of surviving in extremely harsh circumstances and are intrigued as to whether or not this form of life exists or existed in the solar system.”

The purpose of the tests on the Zero-G airliner was to evaluate the chip’s overall performance in a weightless environment. The chip was tested in Martian, lunar and zero-gravity conditions, and Kim and Estlack discovered that the chip performed extremely well. They also tested the device with other experiments related to astronaut health monitoring. They successfully obtained results in these microgravity conditions that were similar to what was simulated in their laboratory back home.

Over the next decade, Kim believes his technology can be used on space missions to ice moons that orbit Saturn and Jupiter and perhaps more missions.

“We are all curious as to whether we are alone in the universe,” he said. “That huge question motivates me to begin this project using lab chip technology, which enables us to provide a conclusive answer.” 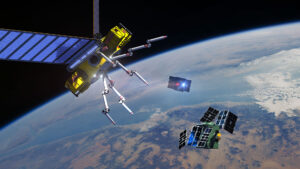