Cynthia Chen, an honors music major with an emphasis in flute performance and a minor in political science, has masterfully found a way to combine her love of music performance and drive for social and cultural activism.

“I always knew I was interested in music, but I wasn’t sure exactly what I wanted to do with it,” said Chen.

“Throughout the course of my time at the U, I’ve been involved in a lot of leadership-based activities and I realized that I really enjoy public service. The Honors College played a large role in exposing me to those opportunities.”

During her freshman year, Chen was part of the Honors College’s Community Leaders scholars group, where she visited community leaders and heard about their journeys to success.

“Through that I learned that there’s not one defined path or formula to becoming a successful leader. You just take opportunities as they’re presented to you and try to learn as much as you can.”

The next year Chen participated in the Uneasy Intersection between Law and Medicine Honors College Praxis Lab.

“The class was led by three influential women in the community who were all engaged in different disciplines, but brought their skills to the table to work together. This kind of inspired me to look beyond academia and solve problems out in the world.”

When the time came for Chen to start working on her honors thesis, she wanted to work on a project that would meld academic research in music with her lifelong interest in societal and racial issues.

“I realized there are a lot of operas and instrumental works written by Europeans about other cultures. From there, I wondered whether these works were exploitative in nature or whether they originated from an interest in other cultures.”

Chen’s honors thesis examines representations of other cultures in pedagogy. Chen does this by analyzing the works of two composers, Schumann and Tchaikovsky, who represented cultures outside of their own through their music.

“Ever since we’re little, we’re taught by the media around us that certain cultures act a certain way. It’s ingrained in us. But why are cultures represented a certain way? What are the motivations behind these composers for the work they created and what are the implications?” Chen said.

An example of this is “Madame Butterfly,” an opera set in Japan written by Italian composer Giacomo Puccini.

In addition to working on her thesis, Chen currently serves as student senate chair of the Associated Students of University of Utah and is heavily involved in the local and campus communities.

“I’m not interested in just sitting in a room in front of my computer learning about the issues in power structure and representation; I’m interested in going out and making change,” said Chen.

Chen is currently an Administrative & Advocacy Fellow for the The Utah Cultural Alliance, a nonprofit arts and humanities advocacy group, where she attends legislative appropriations meetings with lobbyists to promote public funding of the arts.

“Keep your ears to the ground. Don’t be afraid to try something, even if you’re not sure if it’ll align with your interests. Even if something’s not the right fit, it’s a good chance to network and oftentimes you’ll get pointed to the right place. I’ve received a lot of ‘noes’ and there have been a lot of moments where I’ve been doubtful about my path. It just takes persistence.” 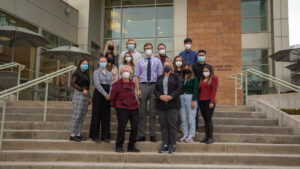 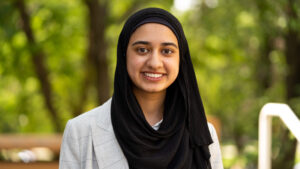