The next generation of the Sloan Digital Sky Survey (SDSS-V), will move forward with mapping the entire sky following a $16 million grant from the Alfred P. Sloan Foundation. The grant will kickstart a groundbreaking all-sky spectroscopic survey for a next wave of discovery, anticipated to start in 2020. The University of Utah has been a key member of the SDSS collaboration since 2009, and all of the survey data will be processed and stored at the U’s Center for High-Performance Computing.

The Sloan Digital Sky Survey has been one of the most successful and influential surveys in the history of astronomy, creating the most detailed three-dimensional maps of the universe ever made, with deep multi-color images of one third of the sky, and spectra for more than three million astronomical objects. The survey’s fifth generation will build off the earlier SDSS incarnations, but will break new ground by pioneering all-sky spectroscopic observations, taking the spectra of another 6 million objects, and monitoring many of the objects’ changes over time.

“SDSS has long been a great example of hundreds of astronomers of all ages, from many continents, working together on a big project. We’re excited to continue that tradition!” says Gail Zasowski, assistant professor in the Department of Physics & Astronomy at the U, and the SDSS-V spokesperson. Zasowski works to keep the collaborative part of the survey running smoothly, and helps interface between SDSS and the rest of the astronomical community.

She also does most of her research with SDSS data, adding, “The new knowledge we’re going to learn about the astrophysics of stars, galaxies and black holes will be truly remarkable.”

SDSS-V will consist of three projects, each mapping different components of the universe: The Milky Way Mapper, the Black Hole Mapper and the Local Volume Mapper. The first Mapper focuses on the formation of the Milky Way and its stars and planets. The second will study the formation, growth, and ultimate sizes of the supermassive black holes that lurk at the centers of galaxies. The Local Volume Mapper will create the first complete spectroscopic maps of the most iconic nearby galaxies.

The survey operates out of both Apache Point Observatory in New Mexico, home of the survey’s original 2.5-meter telescope, and the Carnegie Institute of Science’s Las Campanas Observatory in Chile. SDSS‐V will make use of both optical and infrared spectroscopy, to observe not only in two hemispheres, but also at two wavelengths of light.

Joel Brownstein, research associate professor at the U’s Department of Physics & Astronomy, is the principal data scientist for SDSS-V.  His data team will support the various data reduction and analysis pipelines that process the raw data collected by the telescopes, and make it publicly available in a format that is helpful to a broad range of users, from young students to amateur and professional astronomers. The team is developing software and laying the groundwork for the deluge of data processing that will run on the SDSS cluster, located in the U’s Center for High-Performance Computing in 2020.

“We are very fortunate at the U to provide the central computational cluster for SDSS-V.  A tremendous effort of SDSS has been the development of a data archive and specialized web interfaces that serve astronomers at all phases of their careers.  There is an ever-increasing demand from the community, with current rates exceeding 10 TB per month downloaded with over 50 million hits per month, mostly from the public.  Our data team is very excited to refresh our systems for the next scientific phase of SDSS-V, taking the most advantage of the data science revolution in astronomy,” Brownstein says.

“SDSS-V is proof that great science knows no borders and stands out for its commitment to diversity,” says Evan S. Michelson, program director at the Sloan Foundation. “It will create unparalleled opportunities for all scientists to participate in answering some of the most exciting questions in astronomy.”

This original release from which this was adapted can be found here. 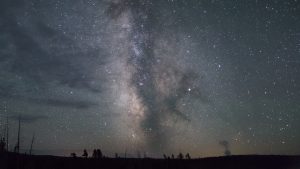 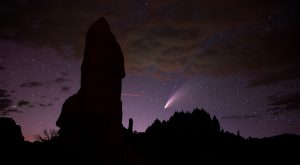