Research by Christopher L. Peterson is at the foundation of the Veterans and Consumers Fair Credit Act, which aims to cap interest rates on consumer loans to all Americans.
Melinda Rogers - communications director, University of Utah S.J. Quinney College of Law 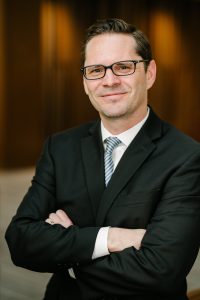 Peterson’s work, titled “American Usury Law and the Military Lending Act,” provides a historical record of the Military Lending Act (MLA), which U.S. Congress adopted in 2006 to protect active-duty military service members and their families from high-cost, predatory loans. The core provision of the statute is a usury limit capping interest rates at no more than 36% each year.

Peterson and his co-author, Paul Kantwill of the Loyola University Chicago School of Law, found that the MLA provides a proven template Congress or individual state legislatures can adopt to better protect military veterans and all consumers from predatory, high-cost debt. The research, published in the Loyola Consumer Law Review earlier this summer, included a model statute that Congress or state legislatures could consider adopting to expand the MLA’s protections to cover military veterans and all consumers.

That model was the foundation for bipartisan legislation introduced in Congress on Tuesday in both the U.S. Senate and House of Representatives. The bill, called the Veterans and Consumers Fair Credit Act, was introduced to coincide with the observation of Veterans Day.

Under current law, banks and other financial businesses are not allowed to make loans to active duty military service members at interest rates above 36% each year. However, federal law currently does not prohibit triple-digit interest rate lending to military veterans, Gold Star Families or other Americans. The proposed legislation introduced in Congress would extend the same protection military service members receive under Department of Defense rules to all consumers.

Peterson testified in a House Financial Services Committee hearing in April in support of the reform now being introduced. He said the policy changes will benefit all Americans, including military families, a group that research has shown can be susceptible to predatory loans.

“A super majority of the American public in both red and blue states believe we need reasonable safeguards to protect consumers from high-cost, predatory debt traps,” said Peterson. “It’s time for Congress to step up and put a speed limit on the reckless lending that harms so many Americans.”

A recognized authority on consumer finance, Peterson has frequently testified in Congressional hearings and has presented his research to the Federal Deposit Insurance Corporation, Federal Reserve Board of Governors and at the White House in both Democratic and Republican administrations. Peterson served as a special advisor in the Office of the Director at the Consumer Financial Protection Bureau from 2014 to 2016 and in the CFPB’s Office of Enforcement beginning in 2012. He also previously served as a special advisor at the Pentagon working on consumer protection for military service members in the Office of Legal Policy for Personnel and Readiness in the U.S. Department of Defense.

Peterson’s books include the Thompson/West casebook “Consumer Law: Cases and Materials” and “Taming the Sharks: Towards a Cure for the High Cost Credit Market,” which won the American College of Consumer Financial Services Lawyers’ outstanding book of the year prize. He is a consumer fellow of the American Bar Association’s Consumer Financial Services Committee. He is a recipient of the National Association of Consumer Agency Administrators’ Consumer Advocate of the Year award and the Department of Defense’s Office of the Secretary of Defense Award for Excellence. Peterson is currently the John J. Flynn Endowed Professor of Law at the University of Utah’s S.J. Quinney College of Law, where he teaches contracts, commercial law and consumer protection courses.