By Marina Gomberg, director of communications and marketing, University of Utah College of Fine Arts

Contemporary art takes many forms. Our experience with a piece of artwork is the intersection between the artist’s intention and the audience’s understanding. It can be beauty and ugliness. It can be history and visions of the future. It can be therapy and play.

And sometimes it’s all those things.

Last week, the University of Utah campus community and, in fact, the world at large, got to witness art’s power to open dialog and expose ideas. The catalyst was Art & Art History graduating senior Nemo Miller’s art installation called “A Safe Place for Stressed Out Students, Otherwise Known as The Cry Closet” in the university’s J. Willard Marriott Library.

With one tweet and in less than 24 hours, word of Miller’s installation became international news.

Miller is majoring in ceramics, but the piece was a work from a woodshop class as part of her sculpture minor. The assignment, given by assistant professor Kelsey Harrison, was to create something that acted as a social intervention. The project was part the class’ study of the art movement of the 1990s and early 2000s called Social Practice, which is characterized by artwork that uses the social fabric – our daily lives and public spaces – as its medium, often intervening in shared spaces to change their function or meaning. 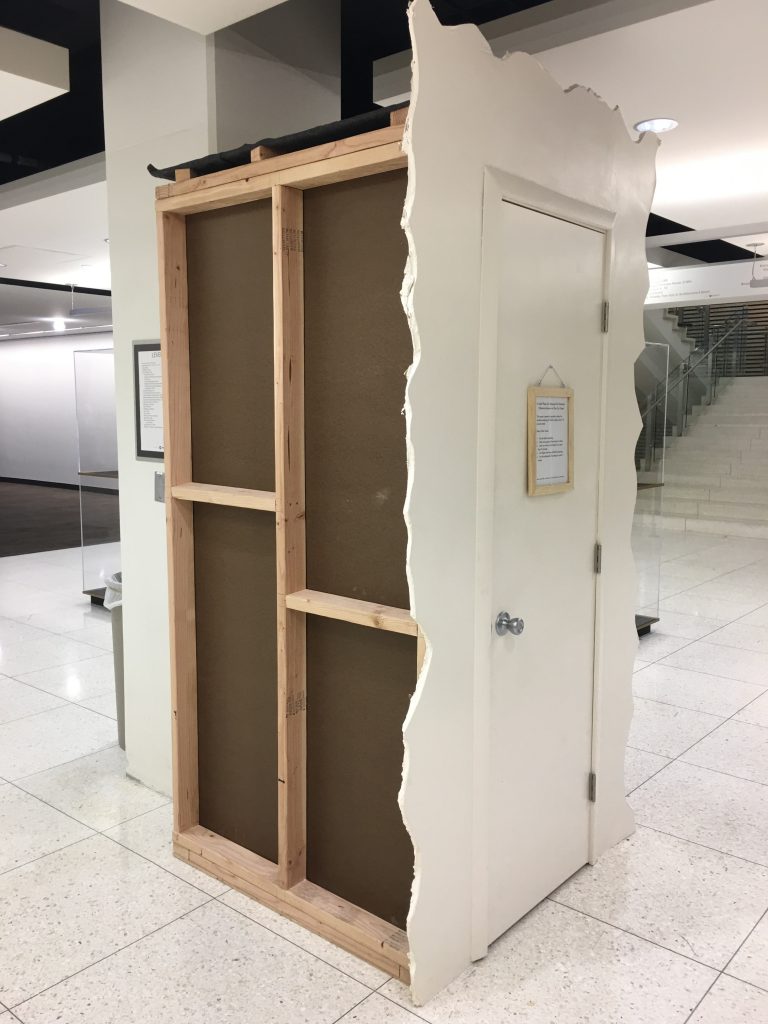 “There are often political undertones (and overtones) to the work of this movement since social space is always also political space,” said Harrison. “Take for example Michael Rakowitz’s 1998 project paraSITE in which he fabricates inflatable dwellings for homeless people that heat and inflate by attaching to the exterior outtake vents of the HVAC systems of buildings. This work, like Miller’s, draws media attention to a problem the artist has identified in culture. In fact, the degree to which media attention is directed by Social Practice works is often the degree of their effectiveness. What I mean is that Michael Rakowitz did not solve homelessness but drew media attention to the problem with his strange, elegant, improbable solution. Miller, similarly, offers an object that has drawn us into international debate. This conversation is the work’s success.”

More specifically, the assignment was to identify a problem in the University of Utah or College of Fine Arts community. Design and build a space that is a solution to the problem you’ve identified. Deploy your solution for the public.

So, Miller made what her own personal anxiety drove her to want – a safe and quiet space to take a breath and regain composure during the pressures of the last finals week of her undergraduate career.

She constructed a space that is roughly 3 feet by 3 feet and outfitted it with soft lighting, a plush interior and a timer to ensure no one person spends too much time in there at the expense of others who might want to use it.

“The inspiration came from my own experience of stress and anxiety,” Miller said. “I wanted to create and provide a space where students like me could decompress. The stress of finals is real for many students, and we’ve even seen from the overwhelming response to this piece that people in the work world want and need places to safely emote, as well. The need is universal – because it’s human.” 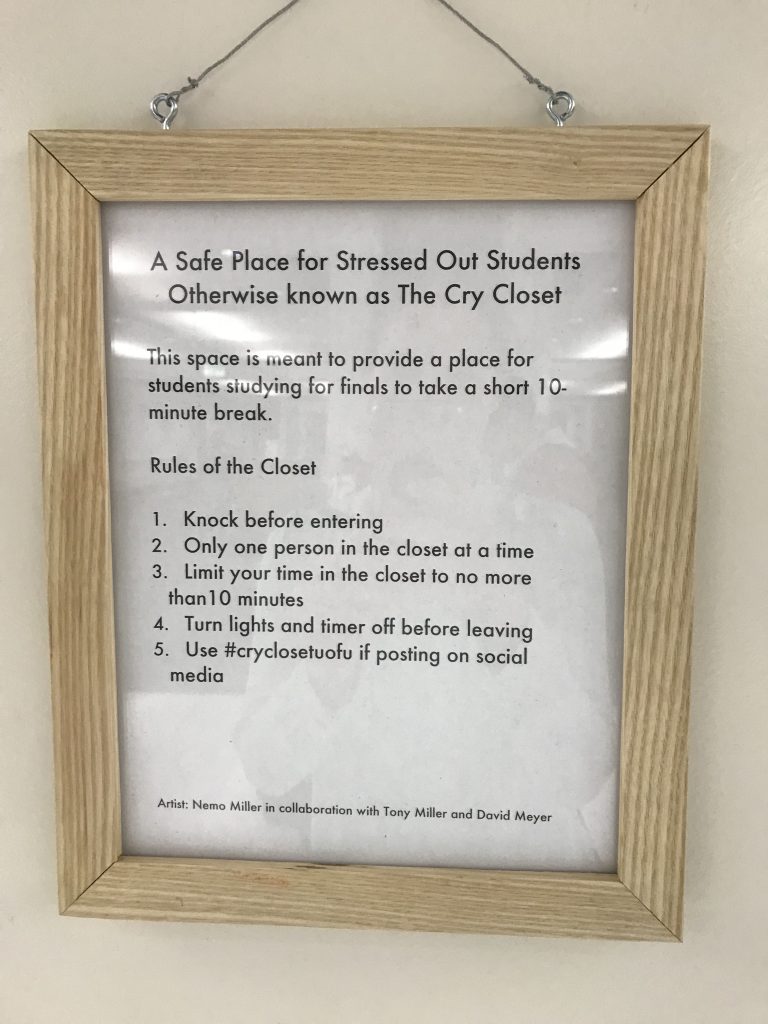 Like many of the most successful works of art, “The Cry Closet” has ignited a robust dialogue centered around the current level of anxiety of University students, what emotions are acceptable to express in public, and, of course, the definition of art.

“We’re proud of our Department of Art & Art History senior, Nemo Miller, whose art installation has sparked conversations about how we, as a campus community and as humans more generally, handle emotions and particularly those in public spaces,” said John W. Scheib, dean of the College of Fine Arts. “This is a fine example of how art has the power to reflect our humanity, to provoke thought and change the way we move forward together. We commend Nemo’s bravery, creativity and thoughtfulness.”

As a self-identified queer artist, Miller’s reference to the “closet” is commentary on how many feel pressured to hide their emotions or pretend they don’t exist.

For some, Miller’s artwork reinforces an erroneous stereotype that current college students are coddled, undisciplined and weak. The critiques to her piece, which pale in volume to its praise, ironically support her original premise as they try to invalidate the need for such spaces and demean those who would want to use them.

But the disagreement doesn’t bother Miller. Success, for her, is gauged by the number of students helped and the discourse created. And the volume of both continue to increase.

Miller’s installation was on display from April 22 through May 2 on the first floor of the J. Willard Marriott Library, but will arguably live on forever.