Knatokie Ford, advocate for women in science, technology, engineering and math, shared her journey as the confident “female Steve Urkel” from her childhood, to feeling like a fraud as a grad student at Harvard, to conquering the imposter syndrome.
Janelle Hanson

Last week, the University of Utah’s MUSE Project welcomed Knatokie Ford, a dynamic advocate for women in science, technology, engineering and math. She shared her journey as the confident “female Steve Urkel” from her childhood, to feeling like a fraud as a grad student at Harvard, to conquering the imposter syndrome.

She defined the imposter syndrome as the inability to internalize accomplishments and a persistent fear of being exposed as a “fraud.” 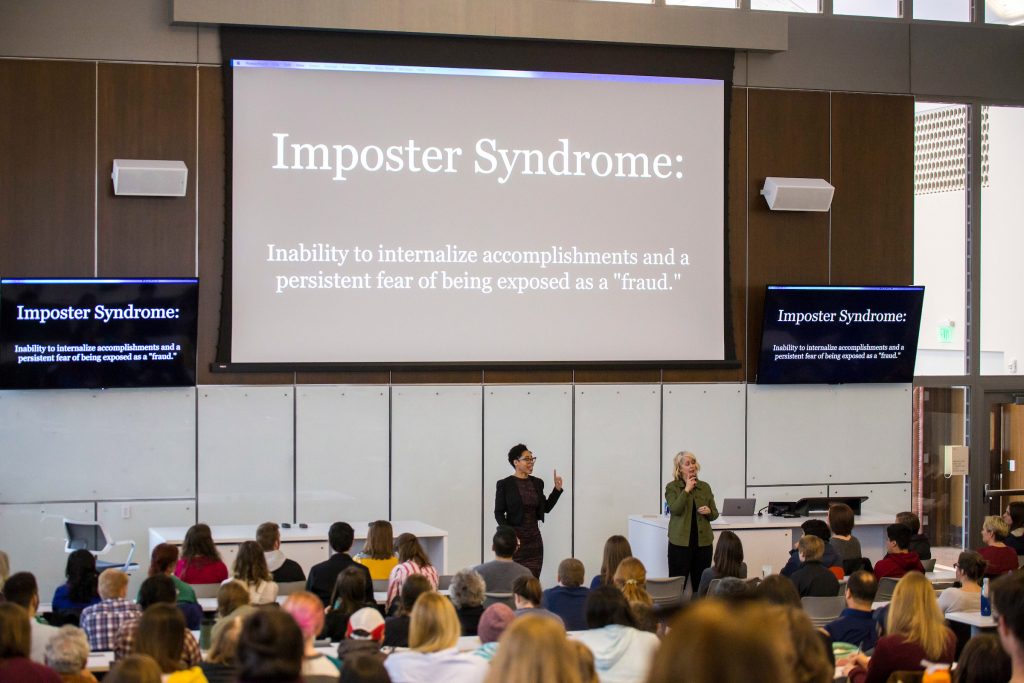 “I would walk around with this anxiety of exposing myself because I didn’t feel like I should be there. I was formerly this outgoing friendly person, but I morphed into a shadow of myself. It was the first time I was aware of being an underrepresented minority. I was often the only African American in my classes and was paralyzed to speak,” Ford said. “As a woman and person of color, I wasn’t supposed to be good at science. I changed myself and even changed how I dressed. I thought I was the only person feeling this way and what if someone finds out I’m not really supposed to be here.”

Ford took a leave of absence from Harvard and headed to Hollywood to get as far away from science as possible. She booked gigs as a movie extra — once, she was an audience member for a fictional performance in the movie “Dream Girls.”

She also worked as a substitute teacher, and was often assigned classrooms in the heart of South Central Los Angeles. At the start of every class, she gave a presentation introducing herself. At the time, she didn’t think about the impact that she, a woman scientist on leave from Harvard, would have on these kids. Although Ford hadn’t battled the imposter syndrome until graduate school, her 7th graders were already feeling like they weren’t good enough.

It wasn’t until she sat in a darkened theater watching “Akeelah and the Bee” that the lightbulb went off. At one point, Akeelah quotes Marianne Williamson: “Our deepest fear is not that we are inadequate. Our deepest fear is that we are powerful beyond measure. We ask ourselves, ‘Who am I to be brilliant, gorgeous, talented, fabulous?’ Actually, who are you not to be? We were born to make manifest the glory of God that is within us. And as we let our own light shine, we unconsciously give other people permission to do the same.”

“That quote struck me like a bolt of lightning,” Ford told the packed room. “In that moment, I felt like I was selling myself short by running away from an opportunity waiting for me at Harvard. I wanted to be a role model. I was hoping that someday, someone would see a woman who looks like me, who’s a scientist and think, ‘Maybe I can do it, too.’ ”

Science has a diversity problem. According to the National Science Foundation Science & Engineering (S&E) Indicators 2016, women made up half of the country, but only 29 percent of STEM workers. African Americans and Hispanics made up almost 26 percent of the population in 2013, but barely 11 percent of the S&E workforce.

When she went back to Harvard, the imposter syndrome was waiting for her, but this time, she was prepared for it. “After a lot of blood, sweat and tears, I transitioned from surviving at Harvard to thriving.”

Ford later worked in the White House as a science advisor in the Obama Administration. She co-organized a screening of the movie “Hidden Figures,” and a panel with the cast and creative team that worked on the film. First Lady Michele Obama would be in attendance and there was a chance President Barack Obama would stop by.

“It was one of the most amazing moments of my career that almost didn’t happen,” Ford said.

The imposter syndrome crept back in and she felt inadequate and overwhelmed. She tried to get out of moderating the panel, but this time the imposter syndrome didn’t prevail. Her colleagues convinced her she was the best person for the job. The event was a success and an historical moment for her as she realized a screening of formerly obscured history of black women at NASA was being hosted at the White House, while the current black president was still in office.

“Each and every one of us has a contribution to make in this world. Get out of your own way, believe in yourself, take risks and if you experience self-doubt, be proactive in combating it,” Ford said. “Believe that you fully deserve to be exactly where you are.”

She went on to found Fly Sci Enterprise, an organization seeking to extend the reach and improve public perception of STEM. “Focusing on presenting the ‘cool’ and relatable aspects of STEM and highlighting diverse real life scientists/engineers in order to debunk associated negative stereotypes,” according to knatokieford.com.