Department of Theatre presents “The Two Noble Kinsmen” in a modern-language version in collaboration with the Play On! Project for the Oregon Shakespeare Festival.
Janelle Hanson

The University of Utah Department of Theatre closes the 2017-18 season with “The Two Noble Kinsmen” at the Babcock Theatre, April 7-15. As one of 39 plays to be translated into modern English for the Oregon Shakespeare Festival’s Play On! Project, this play hopes to not only reach Shakespeare fanatics, but to make the work more accessible and inclusive to a broader audience. 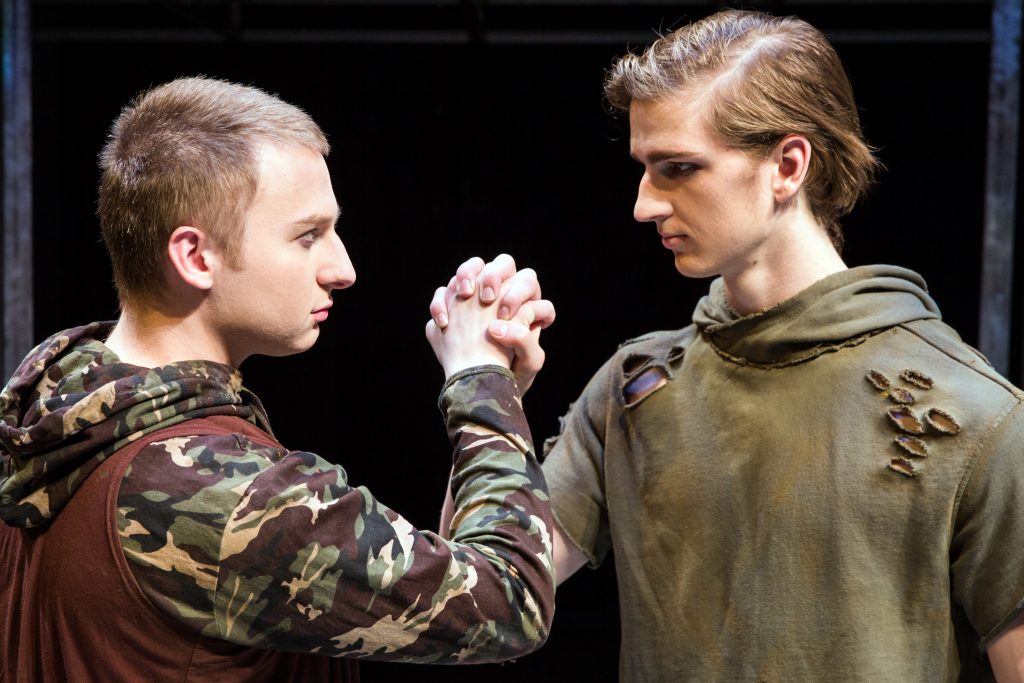 The themes of “The Two Noble Kinsmen” are universal — love, honor, respect — but in the world of the protagonists, Arcite and Palamon, these ideas come at a much higher cost than for the average modern U.S. citizen.

“The world these cousins live in is one of turmoil, it’s war-torn, blood-drenched and controlled by the gods,” said Alex Vermillion, production dramaturg. “And yet, ‘The Two Noble Kinsmen’ reminds us that even in the darkest of times, there are moments of humor, gentleness and celebration.”

“By combining all these elements, we are creating a unique world reflective of the past (Shakespeare’s original inspirations), the present (modern translation) and the future (with the next generation of Shakespearean actors),” said Reyes. “The translation celebrates Shakespeare’s masterwork by focusing directly on the antiquated language to increase understanding, while maintaining the vibrancy of the original.”

About the Play On! Project

Oregon Shakespeare Festival commissioned 36 playwrights and paired them with dramaturgs to translate 39 plays attributed to Shakespeare into contemporary modern English. By seeking out a diverse set of playwrights they hope to bring fresh voices and perspectives to the rigorous work of translation. Each playwright is being asked to put the same pressure and rigor of language as Shakespeare did, keeping in mind meter, rhythm, metaphor, image, rhetoric and emotional content. By the end there will be 39 unique side-by-side companion translations of Shakespeare’s plays that are both performable and extremely useful reference texts for classrooms and productions.

Location: The Babcock Theatre, 300 South University Street (1400 East) in the Simmons Pioneer Memorial Theatre, lower level. Free parking is available to the south of the theatre and at Rice-Eccles Stadium.

Tickets: General Admission tickets are $18, University of Utah faculty and staff are $15, University of Utah students are free with UCard and all other students with valid student ID are $8.50. Tickets can be obtained by calling 801-581-7100, online at tickets.utah.edu or at the Performing Arts Box Office located at Kingsbury Hall.