The University of Utah’s Department of Film & Media Arts has partnered with ASUU to present a screening of “Point B” as part of ASUU’s Free Film Series. “Point B” is 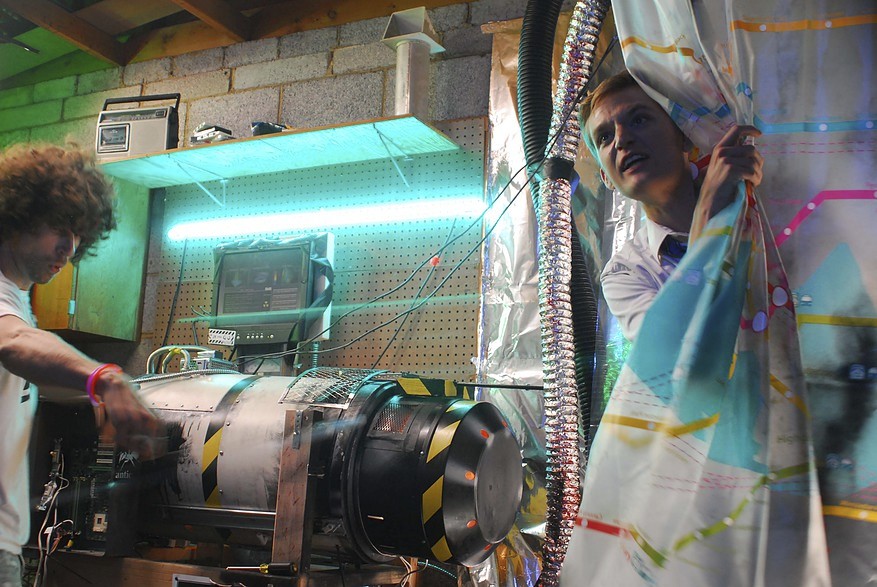 directed by alumnus of the Department of Film & Media Arts, Conor Long, who graduated in 2010. The free sceening is Feb. 10, 2016, 7 p.m. in the Post Theatre and is open to the public. Seating is limited, and early arrival is recommended.

The popular indie film tells the story of four friends who make a clean energy machine, but find, through experimentation, that the machine also serves another purpose – with pretty disastrous consequences. The film has a heavy 80s aesthetic, and is pumped full of electronic music influenced by the decadent decade.

“It’s about these physics students who are trying to build a clean energy reactor in their basement, and they accidentally find out, through misuse of the machine, that they’ve built an incredibly violent and agonizing one-directional teleportation machine,” said Long.

“Point B” is Long’s first feature film and was shot in Salt Lake City during the summer of 2012. Unfortunately, David Fetzer, the film’s lead actor and an alumnus of the U’s Department of Theatre, passed away in the middle of the post-production phase in 2012.

“David’s mother, Betsy Ross, is a dear friend to the Department of Film & Media Arts, and to young filmmakers in general,” said Kevin Hanson, chair of the Department of Film & Media Arts. “She established The David Ross Fetzer Foundation for Emerging Artists, also known as The Davey Foundation, and has been working to honor David through philanthropy. We hope to join in honoring David by showcasing his immense acting talent for a new University of Utah audience.
[bs_well size=”lg”]ASUU FREE FILM SERIES

The ASUU Free Film Series is an ongoing event put on by the Associated Students of the University of Utah. Each semester, the program features a variety of different genres, and the shows are free and open to the public, unless otherwise noted. All movies begin at 7 p.m.

Conor Long was raised in the independent film hotspot that is Park City. He grew up with the Sundance Film Festival and has been on a journey to be a filmmaker since he was a child. After attending Spyhop Productions’ year-long intensive film production course, he continued on to get a Bachelor of Fine Arts in Film and Media Arts as well as a Bachelor of Science in Asian Studies with a minor in Chinese Language from the University of Utah. He has written, produced and directed countless short films, some of which have played at festivals and won various awards, as well as directed his unofficial first feature, FateSpinner (2009), and now his official first feature, Point B. Conor is the owner of Red Coral Films and has spent the last few years developing his next few feature films, most of which are to be shot in Taiwan. He currently works in Taipei, Taiwan and Salt Lake City.