Picture for a moment the dinosaur Coelophysis. Nothing coming to mind? Maybe Oryctodromeus instead. Still nothing?

How about a Velociraptor? 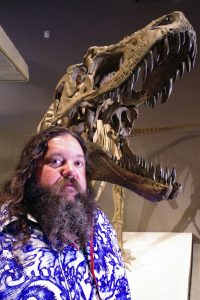 Most people will immediately think of the Velociraptors in the 1993 film Jurassic Park, which were speedy, intelligent, reptilian hunting machines. Paleontologists now understand Velociraptors’ physiology differently—but would the film versions have been as scary with feathers?

Mark Loewen, paleontologist at the Natural History Museum of Utah, teaches an introductory course that explores the relationship between storytelling and accuracy in Hollywood science. The GEO 1000 course, Earth Science in the Cinema, teaches students how to critically evaluate science in the media and uses film to set the context for discussion of scientific principles.

“Unless you have context for a piece of information it’s hard to retain it,” says Geology and Geophysics professor Gabriel Bowen, who originated the course. “The idea is to use Hollywood films as a vehicle to get people interested and excited and to provide something that folks could remember.”

Bowen brought the concept of the course with him to the University of Utah in 2012 after teaching a similar class at Purdue University. Bowen will take sabbatical leave in the 2018-19 academic year, handing the reins of both the fall and spring offerings of the course to Loewen, who had been teaching the class in the fall.

Although the GEO 1000 class under the name “Natural Disasters,” aimed at non-majors, had been taught at the U for many years, Earth Science in the Cinema adds a weekly film screening to set the stage for that week’s concept. A discussion of the earth’s interior, for example, is accompanied by 2003’s The Core. Students view 2004’s The Day After Tomorrow while exploring climate change. And dinosaur week features, of course, Jurassic Park. 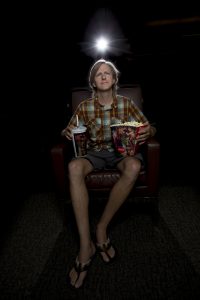 Loewen also uses popular films in his GEO 1040 World of Dinosaurs course.  “We decided to change ‘Natural Disasters’ into ‘Earth Science in the Cinema’ because both Dr. Bowen and I have been using a lot of different movies in the class,” says Loewen. GEO 1040, he says focuses on movies that bring dinosaurs to life, while GEO 1000 is focused more on hurricanes, earthquakes, volcanoes, and tsunamis as recorded in Hollywood films.

In pursuit of a good story, Hollywood films leave varying degrees of scientific accuracy behind. “Different movies are bad for different reasons,” Bowen says. Some of the worst offenders, he says, include 2003’s The Core (“The science doesn’t make any sense at all, for so many reasons”) and 2009’s 2012 (“Grounded just enough in real science ideas to make it confusing”).

Others do much better, with filmmakers expending extra effort to include subject matter experts in film production. 1996’ Twister, for example, employed a scientific consultant on set to coach the actors on how to accurately talk about meteorology. “All these movies, that one included, have some bogus science, but they did their due diligence on that one,” Bowen says. “A lot of scientific elements are based on how real scientists would talk about their work.”

Bowen teaches how to sift fact from fiction in both entertainment and news media. “There’s a lot of nonsense and disinformation out there, and making sense of it is something that any citizen needs to be able to do at some level,” he says.

Loewen welcomes students from all disciplines to join his next Earth Science in the Cinema or World of Dinosaurs course, with both courses taught in Fall 2018 and Spring 2019.