Maybe you’ve seen him in the news, talking about his current research in gene targeting —work that in 2007 earned him the Nobel Prize in Physiology or Medicine.

Maybe you’ve seen him around campus, a familiar face at the rec center where he works out daily.

Wherever you’ve seen him, if you’ve crossed paths with Mario Capecchi, you’ve encountered a man who has changed the world.

On March 9 you can hear more about the work of the University of Utah’s own Nobel laureate at a pizza and politics event that is part of the “Outstanding Professor Lecture Series” sponsored by the U’s Hinckley Institute of Politics. The event, from 12-1 p.m., is free and open to the public.

Many already know the compelling story of Capecchi, who as a child was forced to wander four years on the streets of Italy after the Nazis imprisoned his mother in a concentration camp. His mother was imprisoned during World War II, but found him after the war and they eventually came to the United States to live with his aunt and uncle.

Capecchi received his bachelor’s degree in chemistry and physics from Antioch College in 1961 and his doctorate in biophysics from Harvard University in 1967. He completed his thesis work under the guidance of Nobel laureate James D. Watson, who, along with Francis Crick, determined the structure of DNA. Capecchi became a junior fellow at Harvard and was an associate professor of biochemistry there when, in 1973, he left to join the University of Utah faculty.

Today, Capecchi is distinguished professor of human genetics and biology at the U’s Eccles Institute of Human Genetics and a Howard Hughes Medical Institute investigator. He is best known for his pioneering development of “knockout mice” technology, a gene-targeting technique that has revolutionized the study of mammalian biology and allowed the creation of animal models for hundreds of human diseases, including the modeling of cancers in the mouse.

Knockout technology makes possible detailed evaluation of the function of every mouse gene at any stage of development or in the adult. The technology not only has made possible the production of animal models for human disease, but it also is providing Capecchi and other researchers with insights into understanding fundamental biological questions, including development of the brain in the embryo or its function in the adult.

Capecchi’s development of gene targeting in mouse embryo-derived stem cells allows investigators to create mice with mutations in any desired gene and gives them virtually complete freedom to manipulate the DNA sequences in the genome of living mice.

He shared the 2007 prize with Oliver Smithies of the University of North Carolina, Chapel Hill and Martin Evan of the University of Cardiff, Wales. The Nobel topped a long list of prestigious honors for Capecchi. His achievements in gene targeting were recognized with the 2001 Albert Lasker Award for Basic Medical Research and the 2001 National Medal of Science, America’s highest award for lifetime achievement in scientific research, presented by former President George W. Bush. In 2003, he also received the Wolf Prize in Medicine, Israel’s highest award for medical science, and the 2003 Pezcoller Foundation-AACR (American Association for Cancer Research) International Award for Cancer Research. Capecchi also received the 2005 March of Dimes Prize in Developmental Biology —and many other accolades. 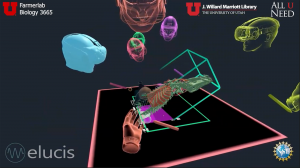