Civil war drove 6-month-old Naima Mohamed and her family from Somalia to a refugee camp in Kenya and after 15 years in the camp — Mohamed and her family were finally able to resettle in the United States. Everything in Utah, including the spoken language, was unfamiliar. She’s now in her final semester before graduating from the Master of Social Work program.
Janelle Hanson

Civil war drove 6-month-old Naima Mohamed and her family from Somalia to a refugee camp in Kenya. “When we first arrived there,” she said, “we didn’t realize that the camp would become our permanent home.” In 2006—after 15 years in the camp—Mohamed and her family were finally able to resettle in the United States. Everything in Utah, including the spoken language, was unfamiliar. 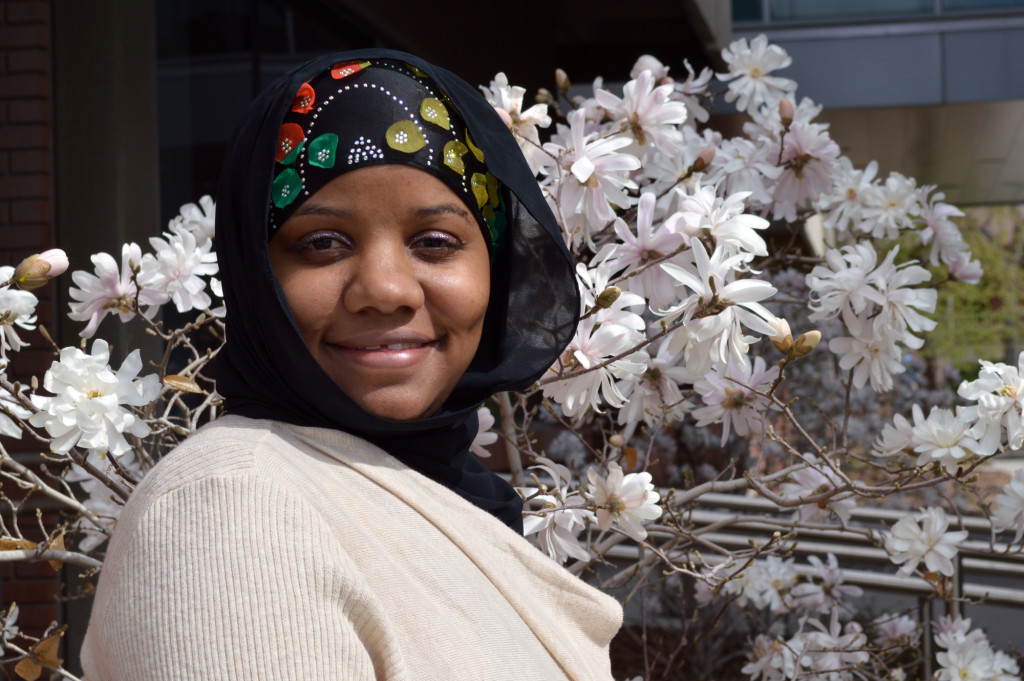 Now, in her final semester before graduating from the Master of Social Work program at the University of Utah, she said “I believe this country has all the resources that will enable me to attain the level and quality of education I seek, widening the scope of my knowledge and skills, and making it possible for me to achieve my goals.”

It took a lot of strength and tenacity to make it this far. When she first arrived in American, Mohamed enrolled as a sophomore in Salt Lake City’s East High School. “I was thrown into an environment where I could not understand anyone around me,” she said. “I did not want people to make fun of me because of my inability to converse in English. This pushed me to learn quickly.”

A volunteer from Catholic Community Services visited Mohamed’s family three times a week to help them learn English, yet she took steps to learn faster. She stayed after school nearly every day to practice English.

“My teachers were always so kind and patient when I asked them to repeat words or explain the meaning of them,” recalled Mohamed. Her work paid off, and she not only excelled in school, but was soon able to help her family communicate with their doctors.

“I first met Naima when she was in high school, and it is remarkable to realize that she has been so engaged with the community since a very young age,” said Rosemarie Hunter, special assistant to the president for Campus Community Partnerships and director of University Neighborhood Partners.

Upon graduating from high school in 2008, Mohamed was awarded six scholarships for college. She enrolled at the U, and in 2012, graduated with her bachelor’s degree in human development and family studies.

In 2013, Mohamed was accepted into the Master of Social Work Program, bringing along her unquenchable desire to learn and help improve the lives of others. In particular, she is concentrating her studies on global social work.

“My goal is to do research for international issues with a focus on improving quality of life and addressing injustices around the globe,” she said. “I want to develop and advocate for policy decisions that will benefit society as a whole, not just a few influential special interest groups.”

“As a mother of two children and coming from a different culture, I understand the needs of refugees in terms of culturally appropriate child care,” said Mohamed. For that reason, she is helping the program develop a training that will enable other women with refugee backgrounds to become licensed childcare providers in their own homes.

Advocacy isn’t new to Mohamed. Through her school work and her own desire to volunteer, she has worked with several of Utah’s refugee communities, including Burundi and Congolese groups. She also does community outreach with Utah’s community of Somali Bajuni (a little-known ethnic minority tribe from Southern Somalia, and part of Mohamed’s heritage), and serves as a resident committee member for University Neighborhood Partners.

“Naima is a heartfelt and sophisticated thinker who applies her intellect and intuition to integrate her cultural heritage with her education,” said Teresa Molina, associate director of University Neighborhood Partners. “As an individual with a Somali refugee background and as a social work professional, she offers to anyone who interacts with her an example of using one’s strengths to succeed and exploring the opportunities that immigrating to the United States brings to women.”

Mohamed reflects on her educational journey, where it has led her thus far and the people who have cheered her on along the way. In particular, she is grateful for the ongoing support of her family and her husband, Jeilani, whom she said helps her continue even when she feels like quitting.

“I would not be where I am today without their help, love and support,” she said. “My late uncle, Muhammad, inspired me to continue to strive to be the best version of myself every day.”

Jennifer Nozawa is a public relations specialist for the College of Social Work. If you have an interesting story idea, email her at jennifer.nozawa@socwk.utah.edu.

The University of Utah commencement and convocation ceremonies are held annually at the conclusion of spring semester. Candidates for graduation from the summer 2014, fall 2014, spring 2015 or summer 2015 terms may attend. Commencement will be held on Thursday, May 7, 2015, at 6:30 p.m. at the Jon M. Huntsman Center. This year’s commencement speaker will be U.S. Secretary of Veterans Affairs and U alum Robert McDonald. Honorary degrees will be awarded to Anne Cullimore Decker, Henry B. Eyring and Mark Fuller. For more information, please visit the Commencement Ceremony page.