With a history rooted in World War II and a lifespan that has seen a diverse set of uses, the building was instrumental in the U’s growth.
Wes Mangum and Bim Oliver

After serving generations of students, faculty and staff at the University of Utah, the Annex building is scheduled for demolition on June 24. With a history rooted in World War II and a lifespan that has seen a diverse set of uses, this building has been instrumental in the university’s growth.

History of the Annex

The Annex was originally built by the Army in a period of only 90 days during WWII. It went up in 1942 as part of Fort Douglas. Like other WWII buildings, the Annex was intended to be temporary—to last only for the duration of the war. During the war, the Annex served as an administrative building. It was the headquarters of the Ninth Service Area (relocated to the Annex from Presidio in San Francisco for security reasons). The Ninth Service Command’s region covered California, Oregon, Washington, Idaho, Montana, Nevada, Utah and the territory of Alaska. 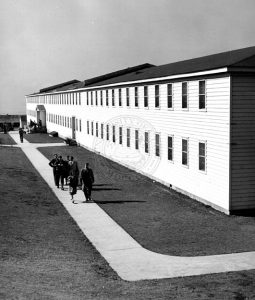 As WWII ended, two contrasting changes took place between the university and its neighbor, Fort Douglas. Dozens of now-vacant buildings constructed as temporary facilities for the Army sat empty across the Fort. Meanwhile, the university was experiencing a period of unprecedented enrollment growth. Fueled primarily by returning veterans, the student population nearly tripled between 1944-45 (3,700 students) to 1946-47 (9,900 students). With wartime rations and efforts focused on supporting military resources, the campus looked essentially the same as it did before the war. Only a handful of buildings lined Presidents Circle—leaving the U with not enough space to accommodate thousands of new students.

General Dwight D. Eisenhower visited Fort Douglas and the University of Utah after WWII and reportedly asked U President Ray Olpin what could be done to help the university. The need for additional space to support the unprecedented growth was the response. In 1948, the U.S. War Department transferred the buildings and the land they were located on to the University, allowing for an immediate answer to the U’s space challenge. This transfer included approximately 300 acres and over 100 buildings, one of which was the Annex.

The largest of these buildings was what was known as the Annex, located at the corner of Hempstead Road (now South Campus Drive) and Wasatch Drive (now Mario Cappechi Drive). The university had leased the Annex in 1946 as a stopgap measure and took full control of the building in 1948. At the time, the Annex was the largest building on campus with over 90,000 square feet of space and 140 rooms. According to the Salt Lake Tribune, it was larger than any four existing university buildings combined. Olpin stated that the Annex alone increased the functional space of the university by about 30%. In the July 27, 1946, edition of the Salt Lake Telegram, Olpin remarked that the Annex would enable “all Utah students who want to attend their state university to enroll this fall.” 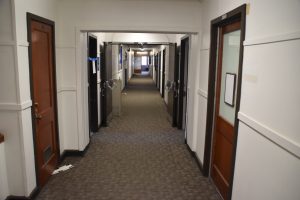 Over the years, the Annex has accommodated the greatest number and diversity of uses of any building in the university’s history. From 1946 into this century, it is likely that nearly every student at the U had at least one class in the Annex during their undergraduate years. A diverse range of disciplines including biology, psychology and business were all housed in the Annex. Researchers at the university made advancements in the fields of social development, health care and the American West within the Annex’s walls. The Annex provided university students with services that included study, work and recreation. Students bought tickets for campus events, searched for jobs in the University Placement Center, and received tutoring in the Academic Support Center. The Annex hosted lectures, exhibitions and—at one point—the world’s largest turtle collection. Recently, the Annex has provided classrooms for Continuing Education courses, as well as a home to vital University departments like the Office of Environmental Health and Safety and Commuter Services. The Annex may be simple architecturally, but its real value comes in the complex uses and life it has given to the U. 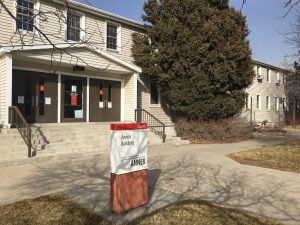 Originally intended to last for between five to 10 years, the Annex has reached the end of its life three-quarters of a century later. For a wide range of structural, maintenance and internal systems reasons, the Annex has been vacated and will be demolished. The university has consulted with the State Historic Preservation Office and is completing documentation and other measures to mitigate the loss of this historic building.

Fitting with its lifetime theme of allowing the University of Utah to expand to serve a growing student body, the Annex will be redeveloped into a parking area but this gateway site will likely have an important new university building in the future. Demolition is scheduled for June 24, and construction on the future parking area will begin shortly thereafter.

It’s very likely that there are university alums who have attended classes in the Annex in the same building that their parents and grandparents took courses at the university. It’s no overstatement to say that the Annex was essential to the growth of the University of Utah. Perhaps the most compelling testament to the Annex’s significance is that this “temporary” building has remained fully functional and versatile for over 75 years.

If you have unique memories or experiences with the Annex we would like to hear them and perhaps follow up with a short conversation. Please email wes.mangum@utah.edu.