Graphic designer and U assistant professor Yvette Shen dove into the data surrounding Salt Lake’s air pollution problem and created an interactive visualization of changing air quality over 35 years. You'll be surprised by what she found.
Janelle Hanson

Salt Lake City has an air pollution problem, and news reports often give the impression that air quality is getting worse. Graphic designer and U assistant professor Yvette Shen dove into the data and created an interactive visualization of changing air quality over 35 years. The big surprise is how much cleaner the city’s air is today compared to 1980.

“By looking at the big picture you can see we actually have some improvement,” says Shen, a lecturer in the Department of Communication.

Air of Salt Lake City, Shen’s web-based visual study, allows you to scroll through the years and see the changing proportion of unhealthy air days – color coded in bright red – as they give way to more yellow and green days with moderate and good air. It’s based on Air Quality Index data from the Environmental Protection Agency, which incorporates five major air pollutants regulated by the Clean Air Act: ozone, particle pollution, carbon monoxide, sulfur dioxide, and nitrogen dioxide. 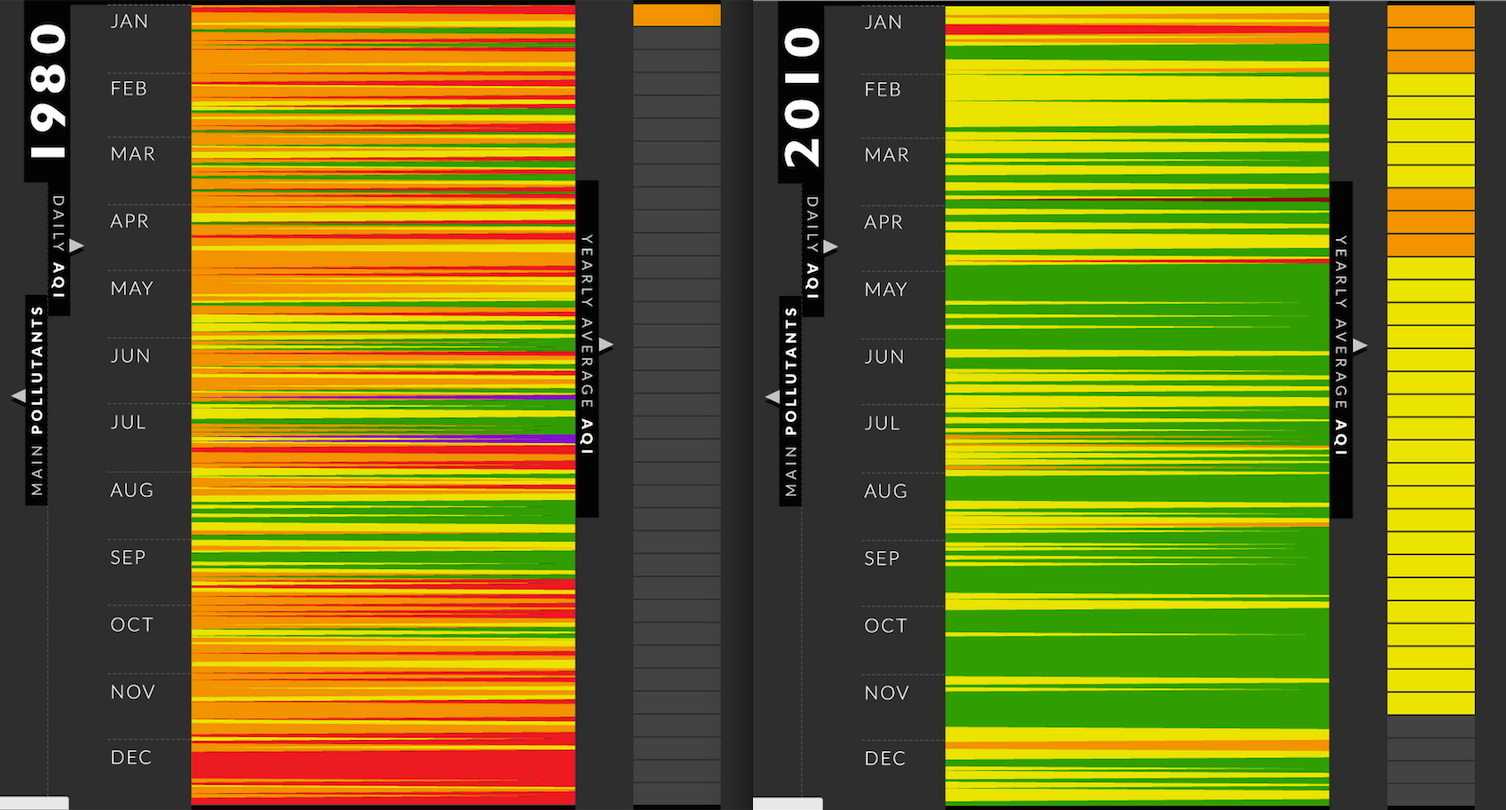 Air quality in Salt Lake City improved substantially from 1980 to 1997, followed by a 10-year plateau in air quality levels, and more recent signs of a trend toward healthier levels since 2007. That’s notable, given that the population grew more than 5 percent between 2000 and 2013. “On the other hand,” Shen notes, “it should also be recognized that no clear improvement of the air quality has been achieved in the last decade.”

In the data visualization, you can track how the mix of air pollutants has changed, year by year, since the 80s when sulfur dioxide levels dominated. SO2 and related sulfur oxides at high concentrations cause acute respiratory problems and have been linked to increased hospitalizations for respiratory illnesses. Salt Lake City’s SO2 levels plummeted in the 1990s.

In 1997, the EPA began to track fine particulate matter (less than 2.5 micrometers in diameter) and the interactive graphic shows how ozone, nitrogen oxides and PM2.5 have become the dominant pollutants in recent years. Ozone in particular remains a problem for Salt Lake City. Ozone forms from chemical reactions between airborne oxides of nitrogen and volatile organic compounds. The major sources are emissions from industrial facilities and electric utilities, engine exhaust, gasoline vapors, and chemical solvents.

Fine particles can fill the air directly from forest fires, but more often come from reactions between mixtures of gases emitted from power plants, industries and vehicle engines.  Fine particles are small enough to breath deeply into the lungs, where they can trigger serious problems, including heart attacks, irregular heartbeat, aggravated asthma, and difficulty breathing.

Shen says graphic design is a powerful communication tool that can overcome barriers of cultural background and lack of technical training. “It’s not just pretty looking graphics, it’s about communicating abstract data clearly,” she says. She hopes her latest project will help raise awareness about what Salt Lake City has done right, and highlight the work that still need to be done.

Joseph Rojas-Burke is a communication specialist at University Marketing and Communications. If you have an interesting story idea, email him at joe.rojas@utah.edu.