SACNAS fosters the success of underrepresented minority students and young professionals at the U.
Janelle Hanson

It couldn’t have been a mere coincidence. Of the 12 individuals with Down syndrome on Judi Simcox’s sister’s Special Olympics team, four had Type 1 diabetes. The then-ninth-grader’s curiosity was piqued. Why would a whopping one-third of the athletes have both disorders?

Simcox decided to address the question with her upcoming school project. Her findings?

“Nobody knew the answer,” said Simcox, who is now a postdoc engaged in biochemical research at the University of Utah and an active member of a U chapter of the Society for Advancement of Chicanos and Native Americans in Science (SACNAS).

“It was kind of my first introduction to science and to the idea that there are questions that nobody knows the answers to — important questions,” Simcox remembered.

Though she showed this early sign that she had a scientist’s inquisitive nature, it wasn’t until her senior year of college that she imagined a research career was actually possible.

Growing up, she hadn’t known any scientists. And the first-generation Filipino American, who is also one-sixteenth Crow, had seen few, if any, minority scientists portrayed in the media. So, as far as teenage Simcox was concerned, becoming a scientist wasn’t “a thing.”

U biochemistry professor Claudio Villanueva, a SACNAS faculty advisor who got the U chapter of up and running, has heard similar stories all too often. To him, they represent missed opportunities. “If we don’t train people from minority communities in STEM, we’ll be missing out on a tremendous amount of talent,” he said.

By 2050, it’s expected that minorities will become the majority in America. A major goal of SACNAS is to boost diversity in the STEM workforce to catch up with the nation’s changing demographics.

Today’s statistics show there is a long way to go. Of the 38,939 doctoral degrees awarded in science and engineering in 2014, just 8 percent were awarded to underrepresented minorities. Of those graduates, 4.1 percent were Hispanic or Latino, 3 percent were black; and just 0.3 percent — 110 graduates total — were American Indian or Alaska natives.

Simcox beat the odds. Helping others do the same is what SACNAS is all about, she said. 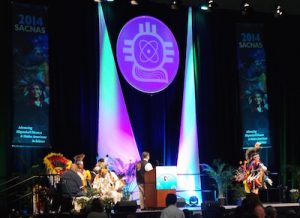 Members of the U’s two SACNAS chapters — there’s an established chapter for grad students and a burgeoning one for undergrads — meet once a month to listen to scientists share their personal stories; update each other on their research; exchange advice about landing lab positions; learn job negotiating skills; and simply interact with fellow people of color and other diversity-minded students pursuing similar paths.

The group works to spread information both locally and throughout campus so up-and-coming students can access more direct avenues to careers in science than the winding routes they themselves navigated.

“I think the most important thing that SACNAS does is get the information out there to students because not many undergraduates know what it takes to get a Ph.D. We want to give them every opportunity to achieve that,” said Zachary Cruz, a grad student ands active SACNAS member who works in Michael Kay’s, biochemistry lab. Cruz is the first person in his family to graduate college — let alone aim for a doctorate.

U SACNAS chapter president Daniela Chavez points to the upcoming annual SACNAS National Diversity in STEM Conference as an excellent opportunity for anyone interested in seeing what STEM careers are all about. There will be more than 1,000 scientific research presentations, and over 100 career development and scientific sessions. The conference will be held in Salt Lake City from Oct. 19-21, 2017. Chavez expects 4,000 participants from across the country.

“They do such a good job of celebrating science but also celebrating culture and individuality,” Chavez said. “It’s all about YES science, but also YES whoever you are.”

Chavez said it took a lot of work and stubbornness to get where she is today.

Chavez, who grew up hiking and exploring Utah’s mountains with her family, first set her sights on becoming an outdoor biologist. That was before she fell in love with microscopes and the fluorescent cell structures and tissues she vividly viewed through the eyepiece.

“To be able to see something and think ‘Wow, I’m the only person who has ever seen this’ — even as small as the discovery may be — it’s exciting to know that,” said Chavez, who studies microscopic worms called C. elegans.

At one point in her journey, she felt out of place because she thought scientists are supposed to look a certain way. That’s not the case anymore. Owning who she is went a long way toward accelerating Chavez’ development.

“I think SACNAS really made me realize ‘Oh, it’s OK to be myself,’” she said. “I can be a Utah girl, I can be a Costa Rican, I can be Mexican — I can be all these things that I am, and it’s actually better.” 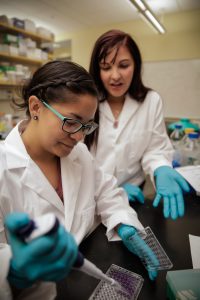 “Science is the perfect example of an environment that is greater than the sum of its parts,” Cruz said. “The more diversity you have, the more creativity you have. People who come from diverse backgrounds can give us solutions you never would have thought of.”

“We know that having different perspectives is important for science because the more people we have who think in different ways, the more likely we are to make those big discoveries,” Villanueva said.

Said Simcox, “I think we all want to answer questions that are going to change the world, and in order to do that, we need everybody at the table.”

Simcox has certainly found a seat. The former teen curious about the correlation between Down syndrome and diabetes now spends her lab time researching potential treatments for Type 2 diabetes.

“I think it’s easy to think of scientists as ‘the other,’ as people who were really born into it,” Simcox said. “But once you really interact with scientists, you realize they’re just normal people.”