By Marina Gomberg, associate director of communications and marketing, University of Utah College of Fine Arts

The following article along with more stories about the College of Fine Arts can be found in Studio, a magazine that features the work and accomplishments of faculty, staff, students, alumni and donors.

When Brooke Horejsi invited the New York based theatre group, Universes, to come to the University of Utah, she wasn’t just booking entertainers for the stage, she was crafting a unique set of impactful creative experiences for our community.

What’s the difference exactly? It’s neither subtle nor just semantics.

Horejsi is the executive director of UtahPresents, the U’s newly reshaped presenting program on campus. The entity used to be known as Kingsbury Hall Presents, but has expanded its mission recently to offer something new, both for the public at large and the U community. Historically, Kingsbury Hall Presents brought to campus an annual season of commercially popular artists like Blue Man Group, Joan Rivers and Chris Isaak. These shows were peppered in among (and oftentimes not easily distinguishable from) the myriad of acts playing at Kingsbury Hall through its theatre rental program, like Odyssey Dance Theatre’s annual performance of Thriller.

But the arts have seen a vibrant renaissance on the U’s campus in the past decade and particularly the past five years. The thirst from students for new arts experiences and the hunger from faculty campus wide to integrate artistic practices into their research have both exploded. In the past three years alone, student attendance at arts events on campus has increased an incredible 157 percent.

As such, when transitioning leadership of Kingsbury Hall in 2014, Raymond Tymas-Jones, whose dual appointments as associate vice president for the arts and dean of the College of Fine Arts both came into play, expanded the executive director position to also include an academic component in the college. So, in addition to her leadership role for UtahPresents, Horejsi is the assistant dean for Art & Creative Engagement.

Her dual role allowed her to guide the former Kingsbury Hall team through a process of transformation in mission and vision – one that now better satisfies the overwhelming appetite for more artistic experiences on campus, both curricular and co-curricular. As it says on utahpresents.org, “For the curious who want to experience artistic creativity pushed beyond the stage, UtahPresents ignites dialogue, explores issues and ideas, catalyzes innovation and connects us.”

Although nonprofit presenters and particularly campus-based arts presenters have been serving communities for many years, they often do this work without mainstream recognition. A critical thinker in the presenting field, and an inspiring guide for Horejsi, Kenneth Foster, the director for the Graduate Arts Leadership Program at the University of Southern California, published a seminal book called “Performing Arts Presenting: From Theory to Practice.” In it, Foster examines presenters’ roles in connecting art, artists, audiences and community.

In Horejsi’s words, “he raises the question: what kind of community do we want to be? Do we want our cultural offerings to feel more like Las Vegas, or more like San Francisco? Do we want to solely focus on commercial entertainment because it sells tickets and makes people money? Or do we want to provide an accurate representation of all the cultural forms, all of the stories, voices, and creative output of a diverse group of people who truly represent our citizenry?

“If it’s only about the bottom line, then far fewer of us will see ourselves reflected on the stages and in that creative output. With this approach to programming, particularly on a university campus, it’s important to invest in a variety of artists and projects to help advance our world and our thinking — in the same way that a university invests in a variety of learning and research to fuel innovation — not just the kind of commercially driven creativity that is focused solely on revenue generation.”

And for UtahPresents, revenue generation isn’t the key measure of success. That’s why when Universes came to campus, in addition to their live performance in the Nancy Peery Marriott Auditorium of Kingsbury Hall, they engaged with the campus and broader community in several ways. Their art form is one that is described as a fusion of poetry, jazz, hip-hop, Spanish bolero and Southern blues, and their message is one of inclusion, celebration of diversity, empowerment and social change.

Bringing them to campus was a joint endeavor between UtahPresents and the Department of Theatre, particularly assistant professor Martine Kei Green-Rogers and Raymond C. Morales Post-Doctoral Fellow Julie Rada, who were awarded University Teaching and Dee Council grants to help fund Universes’ visit filled with coordinated gatherings all across campus and the city. The company spent a good portion of their time with students in Theatre’s Actor Training Program, and spoke at a Lunch and Learn hosted by the U’s Office of Equity & Diversity and the College’s award-winning ArtsForce program.

Company members also made their way into the community and visited Mestizo Arts & Activism Collective, a local art and coffee house on the west side of Salt Lake City, to connect with local high school students. They stopped at Horizonte Alternative High School and Salt Lake Community College, as well, to deliver their “Life As You Know It” workshop, which focuses on finding value in everyone’s unique stories. They even swung by the college’s after party event to meet and mingle with the audience following their main performance.

“I was so inspired by their message about how art affects people and what we can do to infuse it into every aspect of our lives,” said Tori Sicklick, a junior in the Musical Theatre Program. “Art, in every way, is extremely important because it is what fuels and allows for freedom of expression.”

She is right. And as Horejsi notes, “If you are passive about how you consume your education and how you exist here in your student role at the University, then you’re not taking responsibility for creating a place that is truly reflective of you. That’s why UtahPresents demands that students show up and take a risk with us. Sometimes it might fizzle. Other times it will change their lives.” 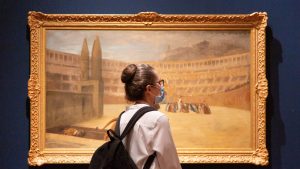 Art in a time of angst: The antidote of looking
November 4, 2020 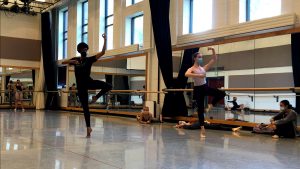 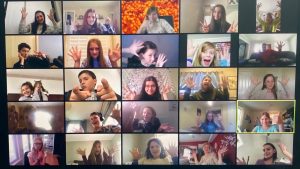