Every four months, the Utah Tribal Leaders come together for two days to “discuss issues of shared concern for the eight federally recognized sovereign tribes of Utah.” In early March, they were hosted by the University of Utah at S.J. Quinney College of Law. 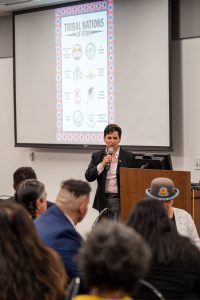 “It was truly an honor to welcome the Utah Tribal Leaders to campus,” said Mary Ann Villarreal, vice president for Equity, Diversity, and Inclusion. “The U is deeply grateful that the indigenous peoples in Utah persevered to protect the land we operate on for future generations and we hope to continue building upon relationships with each of the eight sovereign nations in Utah for many years to come.”

While the second day of the gathering was filled with closed meetings between tribal leaders, the first day included a meeting with Utah Governor Gary Herbert and other government representatives and ended with a reception with tribal leaders and representatives from the U including Villarreal, Lori McDonald, vice president for Student Affairs, and Franci Taylor, director of the American Indian Resource Center. The reception was an opportunity for U leaders to get to know many of the tribal leaders, including those who traveled many miles for the meeting.

“My reservation is located 86 miles southwest of Salt Lake City,” said Candace Jaclyn Bear, chairperson for the Skull Valley Band of Goshute. “Our reservation was established under the Treaty of Toole Valley in 1863. We established our first membership in 1956 with only 13 people and now we have 152.” 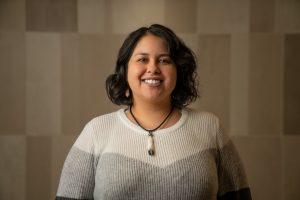 The Skull Valley Band of Goshute is one of the eight federally recognized tribes in Utah. The other seven include Confederated Tribes of Goshute, Paiute Indian Tribe of Utah, Northwestern Band of Shoshone Nation, San Juan Southern Paiute Tribe, Ute Indian Tribe–Uintah and Ouray Reservation, Ute Mountain Ute Tribe and Navajo Nation. Bear said it’s significant whenever all of these tribal leaders come together because while they are sovereign nations, they do share cultural similarities.

“With native people, politics and business circle a lot around socialization,” said Bear. “We have to have that socialization in order to get into these topics because you wouldn’t be able to talk about these things with people you don’t trust. So, to me, we’re here to discuss shared interests and at the same time we’re here for unity.”

Mark Freeland, a member of the 24th Navajo Nation Council, said education and transportation are among the top issues many of the sovereign nations in Utah are facing. 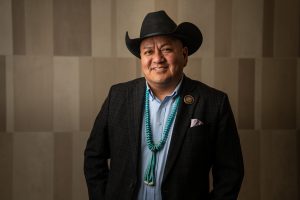 “I think it’s important for people to know that basic infrastructure needs still exist,” said Freeland. “Sometimes our children don’t have electricity and families use kerosene lanterns to do homework. Elders don’t have access to a sink to brush their teeth. So being here and working with the state of Utah, I think there is a lot of work we can accomplish together, government to government, working as two sovereigns, I think we can accomplish a lot for our people.”

Villarreal said she hopes to foster a continued mutually beneficial relationship between the tribal nations and the University of Utah. 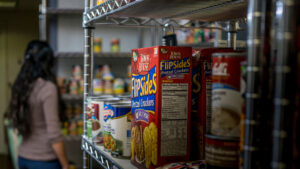