“Two seasons ago, we were playing the University of Washington at home. Both teams were ranked in the top 10 in the country. The atmosphere was electric with ESPN broadcasting the game. We were all feeling the pressure to perform our very best.

We were down 21-7 in the third quarter. Momentum clearly shifted when we got a turnover, and this was our chance to come back and win the game. On fourth down, coach called a play specifically designed to one particular player. The player was wide-open in the endzone. It looked like a sure touchdown, but the player dropped a game-changing touchdown pass in front of 50,000 fans and millions more people watching the game on national TV. We went on to lose the game, and as you can imagine that player was absolutely devastated.

Unfortunately, that player was me.

I sat by myself after the game in the locker room feeling as low as I have ever felt in my entire life. Coach Morgan Scalley found me and said something I will never forget: ‘Don’t let this moment define you.’

Those few words deeply impacted me though I knew going forward would not be easy. During the next few weeks, I remember having to deliberately choose to fight overwhelming feelings of embarrassment, doubt and discouragement; to not give up but to rise above what had happened. I knew I had to keep focused on my personal goals of contributing to the team and earning a full-ride scholarship no matter how difficult it was.

The team rallied and won the next eight games and made it to the Pac-12 championship. And by the bowl game, I went from ‘walk-on’ to earning a full-ride scholarship.

Failure is inevitable, but how we respond to our failures is what really matters. This is by far the most powerful lesson I’ve learned at the U. I hope we can always build on the experiences we’ve had, the memories we’ve made and friendships we’ve built here at the U, and let them shape the rest of our lives.” 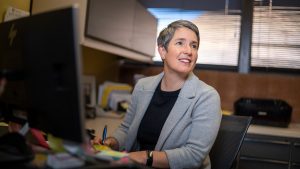