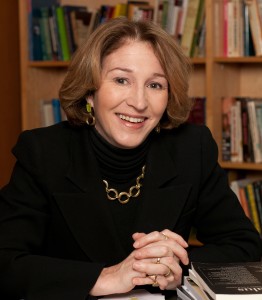 Slaughter became one of the country’s most talked about writers after she published an in-depth and controversial look into the extreme work-life balance hurdles of today’s professional women, “Why Women Still Can’t Have It All.” It became the most-read article in The Atlantic’s 100-year history. Her latest book, “Unfinished Business: Women Men Work Family,” which focuses on the future of the workplace, was named one of the best books of 2015 by NPR and The Economist.

“University of Utah students are uniquely situated in their desire to have meaningful conversations about work-life balance,” Pershing said. “A large number are working, and many have families. They serve in the military and as volunteers within their communities and abroad before completing their degrees. The university is dedicated to promoting student success and degree completion by helping students create balance in all aspects of their lives, and we recognize there is more to be done. Anne-Marie Slaughter’s address will spark more conversations about this important topic and create a backdrop for dialogue between citizens and policy makers across the state. We are honored to have her as our keynote commencement speaker.”

From 2009-2011, Slaughter headed the U.S. State Department’s internal think tank and advised Secretary of State Hillary Clinton. As the director of policy planning, the first woman to hold the position, she oversaw a major review of America’s diplomatic and development priorities. It was during this time that Slaughter’s views on work-life balance began to shift as she experienced less flexibility to combine work and family life.

Slaughter is president and CEO of New America, a public policy institute and idea incubator that develops solutions for public problems in areas such as national security, healthcare, technology policy and education. She received her doctorate in international relations from Oxford and her law degree from Harvard before teaching at the University of Chicago and Harvard Law schools. She is a member of the Aspen Strategy Group, on the board of Abt Associates and is one of five members of the PIMCO International Advisory Board.

General commencement exercises will be held Thursday, May 5, beginning at 6:30 p.m. in the Jon M. Huntsman Center on the University of Utah campus.