U to invest millions in safety

University of Utah President Ruth Watkins has approved the hiring of a chief safety officer to coordinate and oversee safety initiatives on campus. 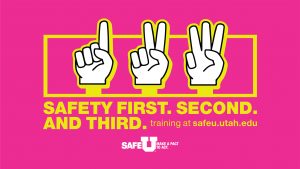 The new chief safety officer position is one of more than two dozen recommendations made by the Presidential Task Force on Campus Safety, which the president reconvened in December to look at general safety practices and resources. Watkins has accepted all the proposals from the task force, whose members represented a cross-section of campus entities.

The university will, over time, invest approximately $925,000 to implement the group’s recommendations. These actions are in addition to approximately $6 million in safety expenditures that will be made by other campus entities over the next several years and which the task force has endorsed, such as hiring more security officers for Health Sciences buildings and installing new security systems in older campus housing units.

The task force recommendations also are in addition to 30 campus-wide improvements made following an independent team’s review of the university’s response in the Lauren McCluskey case.

“I am very appreciative of all the time, analysis and research task force members dedicated to this effort,” Watkins said. “Safety is a top priority for our campus and this committee brought forward many good ideas. We are determined to make this institution as safe as it can be.”

In addition to hiring a chief safety officer, other task force recommendations being implemented include:

A complete list of task force recommendations follows below.

“These actions will advance our efforts to build a culture of safety at the U,” said Michele Ballantyne, who co-chaired the task force with Barb Snyder, former vice president of student affairs. “Most important, they will result in tangible changes that benefit everyone, especially students.”

The task force met between December 2018 and July 2019. The co-chairs and some task force members also met with various groups on campus to gather additional information about helpful safety measures. Students advocated specifically for centralizing evening classes on campus and for parking options located close to buildings in use at night, such as libraries.

Former U President David Pershing first commissioned the task force in January 2017 to look at measures to improve campus safety. That year, the university invested nearly $400,000 in safety-related actions.

Estimated expenditures by other university entities endorsed by task force (indicated by *): $5.9 million

The Office of the Registrar has worked to consolidate evening classes into five “neighborhoods” where key buildings are located. Commuter Services is coordinating shuttle bus schedules and the new SafeRide on-demand transportation service with class start and stop times in their areas. Courtesy escorts also are available to students upon request. The neighborhoods are: