A study of indoor air quality at two Salt Lake City high schools finds that although air filtration diminishes the amount of outdoor pollution, indoor air still reflects trends in outdoor air quality with a delay, depending on pollution type, of about an hour.

The study, conducted in 2018 by the Salt Lake County Health Department and published in the journal Pollutants, comes as the Salt Lake Valley’s winter inversion season is winding down and at a time when COVID-19 has spurred discussions on increasing ventilation in schools. The results, says study lead author Daniel Mendoza, are part of a series of studies to better understand the factors impacting indoor air quality and how protective indoor environments are from poor outdoor air quality.

“That’s going to give us much more information and a more substantial way to approach and justify the need for improving air quality,” Mendoza says.

Atmospheric scientists at the University of Utah are always working to better understand the unique air quality challenges of the Salt Lake Valley. Surrounded by mountains, the residents of the Wasatch Front deal with wildfire smoke and ozone pollution in the summer as well as winter inversions which trap emissions under a lid of stagnant air and the everyday impacts of car, building and industrial emissions.

So, U scientists have found creative ways to analyze pollution sources. They’ve placed air sensors on a van, on light rail trains, on electric buses, and even on Google StreetView cars. Now Mendoza, a research assistant professor in the Department of Atmospheric Sciences and visiting assistant professor in the Department of City & Metropolitan Planning, is taking those studies indoors to see how changes in outdoor air quality filter into the spaces where most of us spend our time.

In spring 2018, Mendoza, also an adjunct assistant professor in the pulmonary division, School of Medicine, and a senior scientist at the NEXUS interdisciplinary research institute, along with Tabitha Benney, associate professor of political science and Sarah Boll of the State of Utah Division of Facilities Construction and Management installed particulate matter sensors in an office building in Taylorsville, Utah to begin to understand air quality trends over a year. They found that poor outdoor air quality events due to fireworks,  wildfires and wintertime inversion events showed up on the indoor sensors. The building’s filtration system kept out a lot of the inversion pollution, which is partly dependent on temperature and humidity conditions, but not as much of the bad air due to smoke.

That was only the beginning of what Mendoza and Benney want to learn, though, about indoor air pollution. Generally, an office building is a clean environment with consistent activities throughout the day and used primarily during the day. But things get messier as you think of other environments. What about a school with a kitchen or a gymnasium with students from multiple homes and neighborhoods tracking in the dust?

It’s all part of a picture that becomes clearer step by step with each research project. This study focuses on school environments, specifically two schools in Salt Lake City: East High School and West High School. They’re located, as you might expect, on the east and west sides of the city. West High is near the I-15 freeway, railway lines and petroleum refineries, and closer to the Great Salt Lake, which can be a source of blowing dust.

“Children spend on average somewhere around 900 hours a year in school,” Benney says. “So the school has more consequences for the long-term health of children than some homes.”

The team installed two research-grade air quality sensors: one outdoors and one indoors. At West High, the indoor sensor was located on a beam in the student commons area. At East High, it was installed in a gym. The sensors reported hourly readings between February 8 and April 30, 2018, during the end of the winter inversion season and the beginning of spring weather that can include dust storms. The sensors specifically looked for particulate matter in the air.

“This is something that can now be actionable,” Mendoza says. “Now we are beginning to understand how long it takes for some types of pollution to percolate inside. Therefore, we can think about potentially reducing airflow during those times, because we know that there’s going to be this increase in pollution.”

In addition to sharing their results with school officials, the researchers hope to study if, for example, since the morning rush hour pollution peaks indoors at around the same time each day, academic performance during that class period is affected.

There were a few notable events recorded by the sensors during the study. One indoor sensor detected burning microwave popcorn.

Another was a two-day inversion event in March when emissions were trapped in the Salt Lake Valley. During those times, the air pollution spikes from rush hour traffic were particularly clear.

“We were able to see, after rush hour ended, residual and increasing levels of pollution until the inversion washed out the third day.”

During the inversion, indoor particulate matter levels didn’t reach unhealthy levels and were actually similar indoors at both schools, even though outdoor air pollution was slightly higher at West High. That’s probably due to the building’s air filters, Mendoza says.

The sensors also recorded the effects of a dust storm that blew through Salt Lake City in mid-April. At the time the outdoor particulate matter sensor at West High School wasn’t working, but the East High sensors picked up the additional dust.

“We did see it spike significantly,” Mendoza says. “It was scientifically really interesting for us because we could see how that pollution came in and worsened the indoor air quality.”

In the course of the study, the researchers learned more about the school’s air handling systems and found that, in 2018, the schools were using MERV8 filters, which capture about 85% of particles. Since then, the schools have upgraded to MERV13 and MERV14 filters, which is roughly comparable to upgrading from a surgical mask to an N95.

“There’s good news,” Benney says. “Schools were fairly protective overall.” Because of the variability in ventilation and filtration in homes and because of elevated air pollution in some low-income neighborhoods, the air in schools may even be safer than in homes for some kids, she says.

Knowing how indoor and outdoor pollution are related is a starting point for taking action to further protect students. “We saw a pattern,” she says, “and we’re trying to figure out how regular that pattern is and how these lags perform across different pollution types so we can try different types of filtering. There are a lot of different avenues to go from this. And that’s what makes it so exciting.”

In the midst of the COVID-19 pandemic, there’s an additional dimension to the issue of ventilation in schools that there wasn’t before.

Currently, the researchers are working on another study on the effects of cars idling outside of schools during drop-off and pick-up times. It’s part of a growing line of research on air quality in and around schools and the impacts that air can have on education.

Other building types to be studied include homes, with pets, evaporative coolers, vacuuming, hairspray and aerosol use and myriad other human factors affecting indoor air quality.

Another study in the works looks back at climate and air quality data over the past 15 years in Utah and includes a look at the health of schools and the communities that surround them.

“We’re trying to frame the research so that instead of just looking at the science, we consider specific groups or vulnerable populations whenever possible to highlight the unique experiences that those people might have,” Benney says. 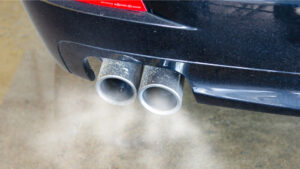