The University of Utah Hinckley Institute of Politics hosted Mitt Romney at Gardner Hall on Thursday for a discussion on the state of the 2016 presidential race.

Hundreds attended the event, where Romney offered his perspective about the landscape of the 2016 presidential campaign in the wake of Super Tuesday results. His resounding message: Electing Republican candidate Donald Trump to the White House is a danger to democracy.

The speech was a thrill for many in the audience of 680 packed into Gardner Hall, including some U students who woke up before dawn to get a spot in line to hear Romney, a two-time presidential candidate, former governor of Massachusetts and businessman, with strong Utah connections.

Austin Fulton, a political science major, set his alarm for 4:30 a.m. and arrived at campus by 6:30 a.m. to wait for the doors to open. His planning paid off, and he was able to score a seat in the auditorium.

The event was part of the Hinckley Institute’s well-known series of political forums, designed to enhance students’ learning experiences and foster discussion and critical thinking about political issues in the world today.

Romney’s insights provided U students with a unique learning opportunity during a particularly interesting election season, said Jason Perry, director of the Hinckley Institute of Politics and vice president for government relations at the University of Utah.

“Our students were fortunate to hear from someone with a long history of public service and political experience as the 2016 election year unfolds,” said Perry.

Fulton, who is also part of the Hinckley Institute’s acclaimed internship program, noted that Hinckley’s sponsorship of the forum elevated the U to trending status as the world tuned in to hear Romney’s comments.

“It was great to hear a perspective on the current presidential race from someone who has been though the process themselves,” said Fulton.

“It was an amazing opportunity for the Hinckley Institute and the university to host this event. With the speech being so highly anticipated it received media attention from all over the country and world. Mitt Romney was a trending topic on both Twitter and Facebook. Because of this, everyone watching saw the Hinckley logo behind him while he talked and every reporter mentioned they were coming live from the University of Utah.

“As a Hinckley Intern myself I know they run a great program so it was great to have an event like this to bring more attention and legitimacy to the Hinckley Institute and the university. Utah is rarely the center of political discussion but this helped to bring more of the conversation here ahead of our own caucus day and our caucus day and our first presidential debate,” Fulton said.

Following the speech, Romney appeared outside Gardner Hall and spent time greeting many students who weren’t able to get a seat inside.

Getting a front row seat to the political process during a highly controversial election season will be memorable for students for years to come, said Lisa Hawkins, a political science major who also works as a student staff assistant at the Hinckley Institute.

“Regardless of party affiliation, it’s refreshing to witness a public figure addressing serious issues with a voice of reason and intelligence in the midst of an election that has become such a global spectacle,” said Hawkins. “Moreover, this event has put the University of Utah and the Hinckley Institute of Politics on the map of an historic conversation – I’m proud to have been in the room.” 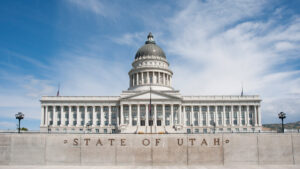 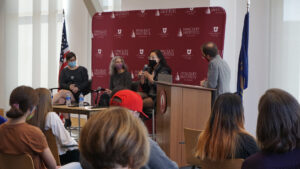 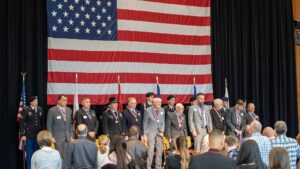 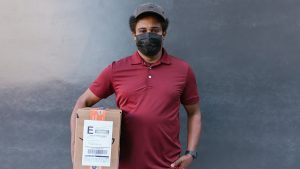