Ribs evolved for movement first, then co-opted for breathing

A major transformation in vertebrate evolution was when breathing shifted from the head to the torso in reptiles. But what caused the shift? A study hypothesizes it was driven by locomotion.
Lisa Potter - science writer, University of Utah Communications 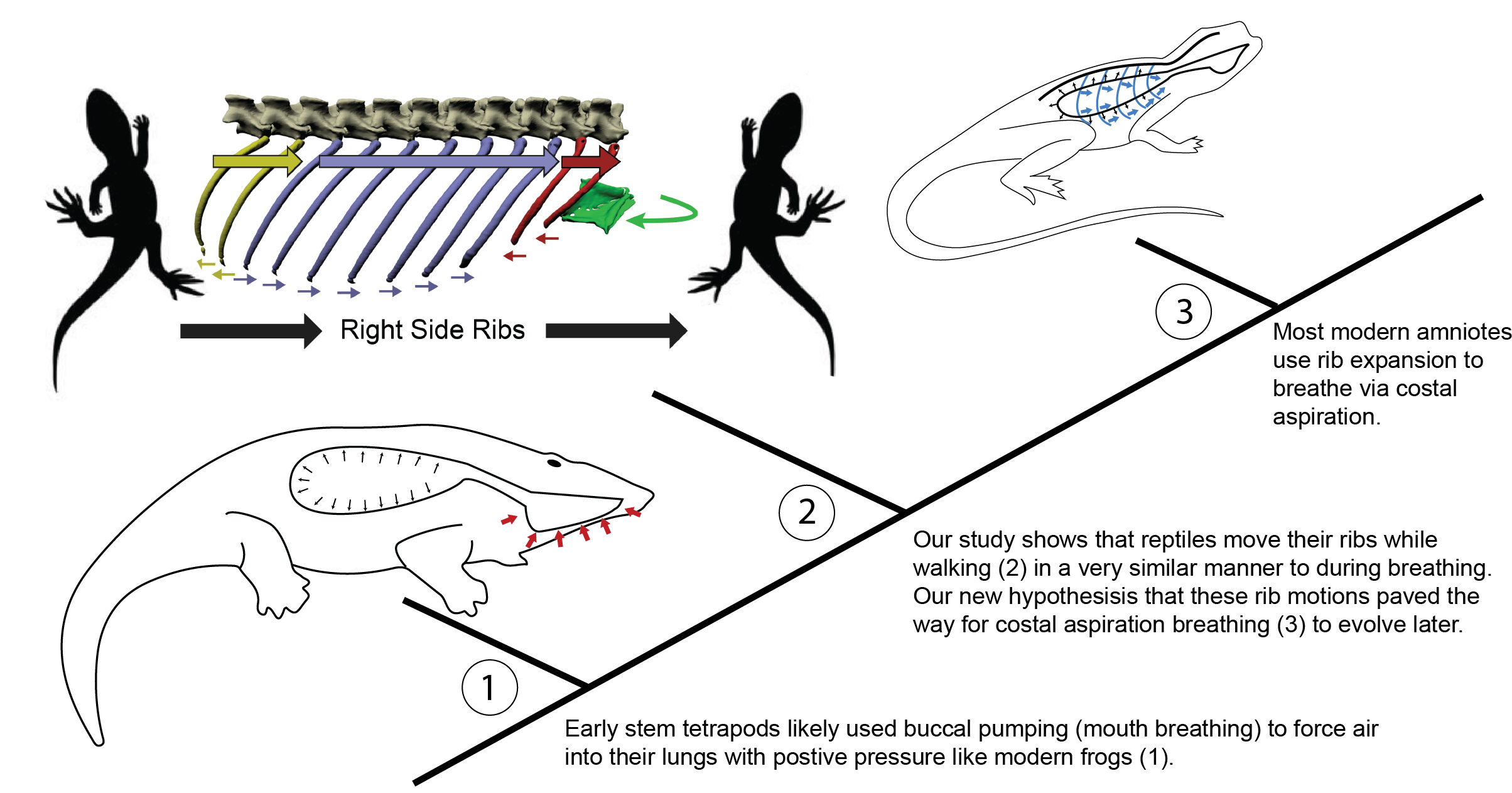 When early tetrapods transitioned from water to land the way they breathed air underwent an evolutionary revolution. Fish use muscles in their head to pump water over their gills. The first land animals utilized a similar technique—modern frogs still use their head and throat to force air into their lungs. Then another major transformation in vertebrate evolution took place that shifted breathing from the head to the torso. In reptiles and mammals, the ribs expand to create a space in the chest that draws in breath. But what caused the shift?

A new study published on May 12 in Scientific Reports posits a new hypothesis—the intermediate step was driven by locomotion.

When lizards walk, they bend side-to-side in a sprawling gait. The ribs and vertebrae are crucial to this movement, but it was unclear how until now. Researchers captured the 3-D motion of lizard ribs and vertebrae using XROMM, a combination of CT scans and X-ray videos. They recorded three savannah monitor lizards and three Argentine black and white tegus walking slowly on a treadmill. The resulting images revealed that while the spine is bending, every rib in both species rotated substantially around its vertebral joint, twisting forward on one side of the body and backward on the other side alternatively with each stride. The mechanics follow nearly the same pattern as when the reptiles inhale and exhale.

“It’s really exciting because we didn’t previously have plausible hypotheses for how rib-breathing evolved,” said first author Robert Cieri, a postdoc at the University of the Sunshine Coast and who conducted the research while at the University of Utah, where he is still affiliated. “We’re proposing that these rib movements first started to facilitate locomotion, then were co-opted for breathing.”

The work also included John Capano and Elizabeth Brainerd at Brown University, and undergraduate Samuel Hatch at the U.

Why did the lizard cross the road? To catch its breath.

Reptiles, birds and mammals, all considered amniotes, use costal aspiration where the ribs and vertebrae control breathing by expanding and contracting. The motion is facilitated by the ribs rotating around the vertebrocostal joints—where the ribs and vertebrae meet. It’s possible that an early amniote ancestor first used these rib movements to enhance its lateral undulation, the side-to-side trunk motion that helps propel lizards forward. During locomotion, each limb has two phases: First is propulsion, which is when the foot is pushing against the ground. Second is swing, which is when the foot is in the air. The new research found that during the arm’s propulsion phase, the ribs on the same side of the body rotate towards the head, and while it’s in the swing phase, they rotate towards the tail. This mimics what the scientists previously found the ribs doing inhalation and exhalation—but this time simultaneously on both sides.

Early tetrapods used sprawling, undulatory locomotion, but likely still had a head-driven breathing system. The authors propose that rib movements and increased costal joint mobility evolved during locomotion to increase stride length, hold the thorax steady, or as the passive result of the ribs moving to prevent being bunched together as the animals bended. At some point, early amniotes evolved the ability to express these rib movements on both sides simultaneously, which allowed for the expansion and contraction of the trunk that support inhalation and exhalation.

“Aspiration breathing was one of the key innovations that allowed amniotes to diversify on land. We were surprised and thrilled to find clues to how it evolved from a study on locomotion,” co-author Brainerd said.