A new Associated Students of the University of Utah (ASUU) presidency, senate and assembly have been sworn in for the 2019-20 academic year, and have been diligently serving University of Utah students. Over the summer they worked to create a strategic plan for the year, build relationships with university administrators and advocate for students.

The elected officials of ASUU’s Executive Branch consist of President AnnaMarie Barnes, Vice President of University Relations Latifa Yaqoobi, and Vice President of Student Relations Gabe Martinez. Together they have appointed an executive cabinet, all of whom are responsible for a range of boards and committees. The executive branch is responsible for working with the student body to accurately represent, advocate for, and provide support to all students of the university.

“I think the biggest way we can support students is by communicating student needs to the administration,” said Barnes. “We represent the student perspective, and we have the connections to vocalize that perspective and make change happen. We have representatives at the Academic Senate, on the Board of Trustees, and in every major committee, or taskforce on campus. We are at the table, and we have the power of a collective student voice.”

Barnes and her cabinet have come out strong with a commitment to create transparency between the ASUU agendas and the students they benefit, with increased press and plans for a student newsletter, along with publications and interviews with on-campus media outlets. Communication about their initiatives and the progress of ASUU is a high priority.

“We’re going to have several public forums this year – the first being a campus safety listening session in October, which is SafeU Month. Students can come and tell us what issues they are experiencing in campus safety,” said Barnes.

Breaking down barriers to counseling on campus is a major focus for ASUU this year. A few of their initiatives include lowering initial wait times to see a counselor by expanding the services the Counseling Center offers, hosting a series of workshops in collaboration with the Counseling Center that will be open to everyone on campus, etc. They are also working with the Center for Student Wellness to create more opportunities for students to receive flu shots, STI and HIV testing.

“Students are making such a large investment when paying for their education – being involved on campus and engaged in change capitalizes on that investment,” said Martinez.

With a Presidency and Executive Cabinet that represents many different communities on campus, this team is enthusiastic about creating more conversations around race, sexuality, and gender. They have plans to work with the Dean of Students to create a regular campus climate study on diversity and inclusion. That will hopefully indicate what resources and education are necessary for our increasingly diverse student body. They’ll also be working on implementing a mandatory diversity education policy. Based on a recommendation from the Campus Safety Task Force, they hope to create a yearly training policy to keep students, faculty and staff abreast of the latest topics and changes in diversity discussions.

Barnes and her team will be making safety a major part of their year in office, with a goal of becoming one of the leaders of on-campus safety in the nation. They are hosting workshops, forums, collaborating on SafeU Month, and focusing heavily on policy. A major part of that will be communicating with students, streamlining reporting, and revamping resources.

“Issues of campus safety are not going away, and they are very under-reported. That is disheartening to me, especially because I want students to feel empowered to report and provided with resources when they do. Our students deserve people who will fight for them, and I want to ensure the University is doing just that,” said Yaqoobi. 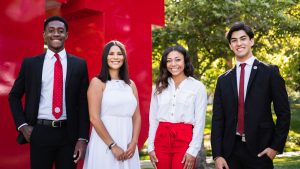 TEAMM: Together Everyone Accesses Much More
August 21, 2020