Utah’s early residents would be surprised to see the canopy of trees that covers the Salt Lake Valley today. Few trees are native to the valley, which means that most of the trees present there today are imported. It’s a much different situation from a natural forest, which is shaped by climate, water availability and biodiversity. So, what factors shape the formation of a new urban forest?

University of Utah professor Diane Pataki and former U postdoctoral scholar Meghan Avolio (now a professor at Johns Hopkins University) took this question on, along with colleagues from Utah State University and the University of Delaware. Their survey of tree species diversity in the Salt Lake Valley is published in Ecological Monographs as “Biodiverse cities: the nursery industry, homeowners, and neighborhood differences drive urban tree composition.”

They found that tree species diversity can be shaped by the species available in nurseries, the preferences of the homeowners and even the tree selections of their neighbors.

“Ecology started out as a descriptive discipline,” Pataki says. “You want to understand why you see the distribution of species that you do. This paper states what is out there in Salt Lake, and makes the best attempt we can to figure out why.”

Urban ecology incorporates social science into ecology and is a relatively unexplored field. So, Pataki and Avolio didn’t have much precedent to go on when designing their study. They began by looking at comparable neighborhoods in the Salt Lake Valley and chose nine neighborhoods representing combinations of median home age (pre-1939, 1951-1970 and 1985-2005) and median household income (less than $45K, $45-85K and more than $85K). From those neighborhoods, they chose five or six blocks to survey, and sent postcard surveys to homeowners, followed up with in-person visits in 2014. The researchers were looking at the tree species present both in homeowner’s yards and in streets. In the homeowner surveys, researchers asked what people liked about the trees in their yard, and what factors led them to remove trees.

After counting and classifying more than 15,000 trees, the team made the following observations:

A sense of place

“We find strong relationships between the sources of plants — nurseries — and why the plants are there — human preferences,” Avolio says. “Someone bought the tree and put it there because they liked something about it.” 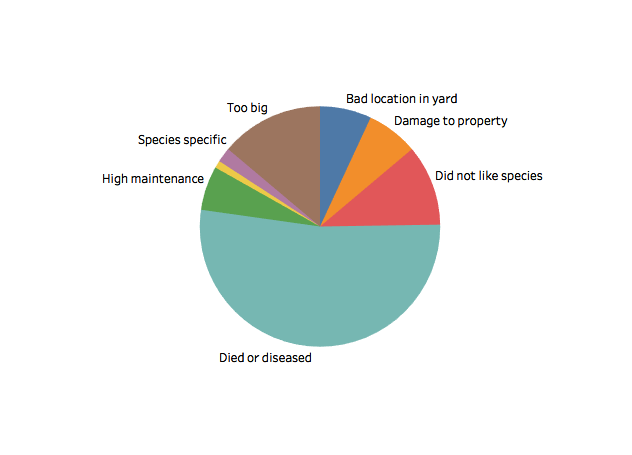 They also noted that yards and neighborhoods close to each other had more similar species patterns, suggesting that neighborhoods have distinctive landscape identities. “These landscape identities likely contribute to the role that trees have in creating a sense of place,” the team writes, “whereby people form a bond with specific trees and with the attributes of a place that trees help create.”

Pataki adds: “When you walk through a forest, you see different environments. That’s probably driven by soil characteristics or slope. Maybe in neighborhoods, people influence each other’s plant preferences.”

Pataki and Avolio hope that their studies of tree diversity and preferences could positively impact nursery tree offerings and homeowner preferences in the future. “We’ll have a better understanding of what people want,” Avolio says, “and once we have that, we can make suggestions for trees that will be more sustainable — use less water, give off less pollen — as long as they have attributes that people like.”

Pataki says that the imported tree diversity is a benefit to the Salt Lake Valley. “I’m skeptical of the idea that the best way to achieve sustainability goals in urban landscaping is by planting native species,” she says. “That’s way too narrow of an approach.  The urban forest is quite diverse and more diverse than the trees that were here before. In fact, the native landscape was almost treeless and that’s not what most people want for the city.”

Find this release here. The release is password-protected until the embargo lifts. The password is SLCtrees.

After the embargo lifts, find the full study here.

Tara L.E. Trammell, from the University of Delaware, and Joanna Endter-Wada from Utah State University were additional co-authors of this study.