In 2013, the University of Utah began an almost $90 million electrical infrastructure project that would remove all three outdated substations across campus and replace them with new ones — an underground renovation project that is set to carry the campus on reliable new systems for the next 40-50 years.

“The purpose of the upgrade was to replace old systems that had reached their maximum capacity,” said Dave Quinlivan, associate director of utilities and energy with Facilities Management. “They provide redundant power feeds to every building on campus as well as eliminate the chances of unplanned power outages.” 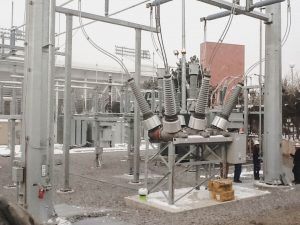 The University of Utah has three substations: One near the hospital, one by the stadium and on near Research Park. Like an electric breaker at home, these substations are wired to every switch on campus and are a crucial asset to all electric-related operations.

Throughout the duration of the nearly five year project, workers laid over 17 miles of new duct bank, 47 miles of cable, and replaced around 160 high voltage switches. Old and rusted switches were replaced with new dielectric switches and manholes were restored to comply with the new electric wiring. The new substations are also integrated with the Cogen Unit — a method that allows a power station to create both heat and electricity at the same time — as well as the high-temp plant on campus.

“The old substations were not only outdated, they were dangerous. The oldest substation we removed was built back in 1958 and the old switches in the manholes were filled with oil,” said Kevin Thomas, the onsite project manager and facility engineer. “They were all underground back then because nobody wanted to see these switches and systems. We pulled the new solid dielectric switches above ground and into a gated enclosure. This change brought the switches out of a dangerous environment as well as eliminated the confined entry spaces for the people who have to work on them, which is a much safer alternative.”

In addition to the new substations, the university also added new electronic monitoring systems which collects live data from the entire system, making control failures easier to detect and faster to remedy. The project spanned over the course of five years and was awarded the 2017 UC&D Outstanding Project Award in the infrastructure category.

Thomas and Scott Jefferson, project engineer with the Planning, Design and Construction office, took the lead on the massive renovation project.