“After a long quarantine, we’re finally attending in-person classes. For international students who moved here during the pandemic, as I did, it’s been challenging learning to adjust to American culture. For South Asians, our culture is so different from westerners. Our values are the same, but our thought processes are so different. Immigrant students are a big reason why America has such a versatile culture—people from different countries can learn a lot from each other. That’s been true for me, a Bangladeshi girl. That’s why the last two years of grad school were memorable—I learned so much from every person I met.

I wanted to share some funny and weird experiences I have had in the past two years as a graduate student. I hope this can help international students as they transition to life here in Utah.

My flight to America was the first time I’d ever been on an airplane. The seats are so small, you can’t sleep, everyone smells—and my trip was more than 24 hours. Air travel is just not made for humans, it’s for caged animals.

When I finally landed in Los Angeles, I fell asleep on an empty seat before boarding the flight to SLC. Eventually, a lady woke me up, yelling ‘Hey you will miss your flight!’ I was dreaming that I was in my country, waiting for the bus on my usual route. In my stupor, I even spoke to the lady in Bengali, saying ‘Mama kawran bazar asche?’ (Did Kawran Bazar station come?) Maybe she thought I was high! I crawled to the security check, but the airport cop told me to come with him. I thought that they had just lost my baggage, but then they showed me a packet of salt.

The thing you have to understand is that Bangladeshi parents don’t let you pack your own bag. They just assume that you will mess it up. So, my mother or an aunt must have put a salt bag in my bag. Why, you ask? Superstition. I am traveling at 800 km/hr at more than 35,000 ft in the air, but this salt was supposed to keep me safe. Well, I reached the LA airport safely because of hundreds of safety tests, drills, etc., done on the flight. But for my mother and aunt, it was because of the salt.

I told the cops this, but the security guard just saw a girl from the sub-continent, looking high as a kite and not understanding half the things he was saying. The cop sent the salt to a chemistry lab in the airport while I waited for 30 minutes. Maybe he thought I was a cousin of Pablo Ecober and he might have nabbed a kingpin of drug trade. He was sorely disappointed.

Eventually, another cop came and told me to always pack my bags myself. But he does not know that arguing with Asian parents is impossible. Bangladeshi parents don’t show their love by hugging you or patting you on your back or buying you a car—they show it by putting salt in your bag to keep you safe, or hiding money in a cloth to find 10 days later, or cooking huge amounts of delicious food.

In Bangladesh, love is all about small gestures.

A surprising moment in a restaurant 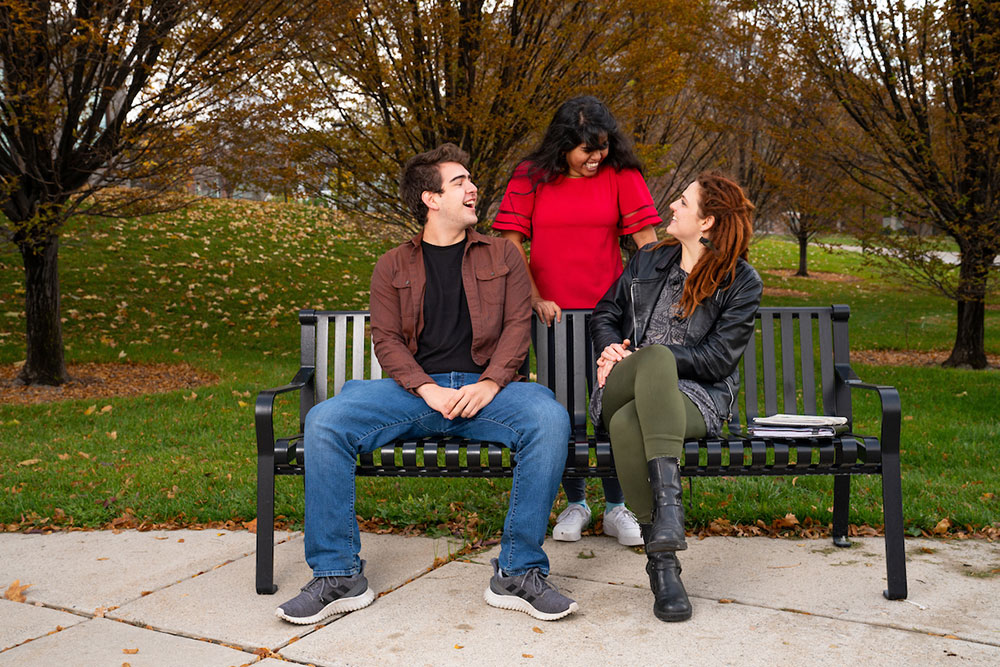 Shabani Karmakar (center) laughs with some of the friends she’s made while earning her doctorate at the University of Utah.

After three months, I was getting homesick. Moving to a different country is not only emotionally traumatic, but it’s physically taxing. Specifically, if you’re a foodie. And I was having trouble adapting to American food.

A weird incident happened when I went out with one of my friends to Café Niche for coffee. My friend, a Hindu from India, asked me to choose between pork or beef as they were good here. Now, this may seem normal to you, but it is highly exceptional in the part of the world I used to live in. I grew up in a vegetarian family and don’t even like the smell of meat. The waitress greeted us, ‘Hey honey! What would you like to order?’ I was again shocked. Why is this random person being so nice to me? Not even my mom talks to me so nicely. The culture shock of niceness made my throat dry, and I couldn’t speak up. In a hurry, I ordered pork sausage.

While my oblivious friend was browsing on her phone, I was panicking. What will happen if I eat pork? Will my family cast me out? Will my mother ever talk to me again? Then the plate arrived. When I didn’t eat for a few minutes, my friend recognized the issue, and her advice was ‘Be cool and eat it.’ What?! This is not a good friend; I am thinking that my family will abandon me for eating this and her advice is to ‘Be cool and eat it.’ Can’t blame her though, she didn’t know what was going inside my head.

I was kind of teary-eyed. The waitress recognized my anguish and changed the sausages with hash browns. She said very kindly, ‘Hey sweety! I care about your food preference, so don’t worry!’ I did not know what I was supposed to say to that nice lady, so I just said thank you. Niceness is not easily digested in my culture!

One thing that never changes across different countries is religious traditions. The Hindu religion has a caste system. It’s kind of a social hierarchy based on what kind of jobs your ancestors did. Priests and kings (and their descendants) are upper class, then come soldiers, then traders, and then sudhras who do menial jobs.

This hierarchy shows its true colors even at religious institutions. Historically, the lower caste members were denied access to the temple or only allowed to enter at the back. I had an incident that reminded me of that. In comparison, what happened to me might seem like a small injustice compared to the atrocities committed against the lower caste people. But as you may have guessed already, I have a flair for the dramatic.

I went to the Krishna temple with some of my Bangladeshi friends. I was never really a practicing Hindu in my adult life. I don’t believe in rituals or religions, but I do have faith in God. On this day, it was a special occasion where we Hindus celebrate the birth of Krishna. ‘Janmastami’ is celebrated by fasting for the whole day and eating only after the moon has appeared, generally around midnight. First, you do an ‘Avishek,’ a ritual where you present water/milk/butter to the Krishna God before you eat.

I fasted that day because my mother asked that I do so and being a good daughter, I complied. So, I was tired and getting cranky, and there was a decent queue. But the temple committee people came, held our line, and sent other people in first. Either these were family members of the committee or people who may have donated money. I had seen this in Bangladesh—my parents donated money to a nearby temple and we had first dibs on any events. I always hated that inequality. Just because we donated some money, we shouldn’t have any extra leg up in praying to God.

I may have had these thoughts because I was angry. But I am wrong in thinking that if there is a God, we all deserve God’s blessings equally? Nobody should be able to skip lines through their connection or money—at least not at God’s steps.

Some things, the good and bad, never change wherever you live. It made me think of something Catherine Pulsifer said, ‘When we allow ourselves to adapt to different situations, life is easier.’ And that is the purpose of my article—sharing my experience engaging with different people from different countries, accepting and enjoying their traditions, and breaking down our cultural barriers to make an amicable environment on our campus and in our life.

This article would not have been possible without help from my friend Tushar Kataria. I consider my friends to be like credit cards, I swipe them for love, affection, support and care, and pay them back with interest. I am truly blessed to have such great friends. Every day feels like home. I wish that for every new student who is joining our campus.”