This is Daniel Sovelius, a custodian for the U’s Department of Mathematics, as told in part by his brothers Paul and Brace and his coworker Della Rae Riker.

Daniel came to the U thanks to an enlightened University of Utah guideline aimed at supporting work opportunities for special-needs individuals.

Brace: “Daniel really loves the U. I saw him after he interviewed for his job and he was jumping up and down and saying, ‘I got the job, I got the job!’”

Paul: “Daniel, it seemed, just took a little longer to process what comes naturally for most. Ignoring professionals who said it would not be possible for him to take care of himself, let alone graduate from high school, [my mother] and Dan proved them wrong.”

And Daniel continues to prove them wrong as he recently celebrated 30 years of working at the university—10 years more than his brother Brace.

Asked how he feels about beating his brother in years of service at the U, Daniel looked at Brace, smiled and said emphatically, “Good!”

Della Rae: “Daniel knows the names of everyone in the building and is always asking faculty ‘Are you going to teach now?’ and asking students ‘You going to class now?’”

“Sometimes I shake hands with people or bump knuckles or elbows,” Daniel said, rattling off names of people he interacts with daily.

Daniel takes UTA to-and-from work and enjoys riding as far south as Payson and up to Brigham City.

“I like to take the bus,” Daniel said. “I’ve been riding the bus a really long time.”

This past spring, Daniel received special recognition from the Department of Mathematics for his three decades of service, which presented him with a certificate signed by his supervisor and President Ruth V. Watkins.

How did it feel? 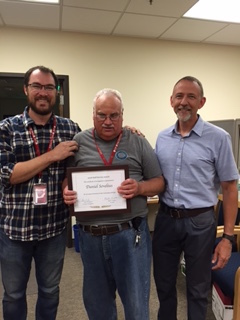