Death Valley doesn’t seem like the most ideal place to ride out rising temperatures amid a changing climate. But for the desert plants that live there, it’s home—and they face the choice to adapt or die.

Research from the University of Utah shows that one shrub, the brittlebush, is adapting, and showing a remarkable ability to respond to increased temperature and aridity. The research is published in Proceedings of the National Academy of Sciences and was funded by the National Science Foundation.

“We were able to directly relate changes in plant ecophysiology to changing climate over a relatively short timescale,” says study lead author and laboratory technician Avery Driscoll.  “This shows us that desert shrubs can and do acclimate to changing environmental conditions.”

Forty years in the desert

Data for this study came from two long-term research sites in the remote deserts of the American Southwest—one in Death Valley and the other near Oatman, Arizona, both with an area of a few hundred square meters. The sites were established in the early 1980s by U distinguished professor of biology Jim Ehleringer, who recognized both the value of long-term observations, and the appeal of traveling somewhere warm during Salt Lake City’s cold months. Every spring for nearly 40 years, Ehleringer and members of his lab have visited the research sites to survey the vegetation and collect samples of plants for later analysis.

In 2020, a scaled-down and postponed survey trip still went forward. “Easy to distance when working in the wide-open of the Mojave,” tweeted co-author Darren Sandquist. 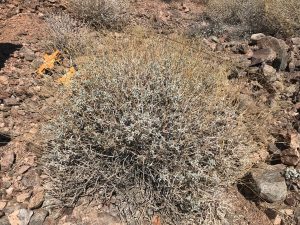 The study focuses on one shrub species in particular: Encelia farinosa, also called brittlebush or incienso. It can live more than 30 years and is found widely throughout the Southwest and northern Mexico, with bright yellow flowers and silvery leaves.

Biologists who study forests have a readily accessible climate record in tree rings. But in environments with few trees, they need another method. Brittlebush leaves, collected over time, contain their own climate record in the isotopes of carbon that make up the leaf tissue. Isotopes are atoms of the same element that differ in weight by only a neutron or two. Many isotopes are stable, i.e. non-radioactive, and their slight difference in mass can be reflected in physical or physiological processes.

In this case, the isotopes of carbon in the brittlebush leaves reflected how wide the plants were opening their stomata, small pores on the underside of their leaves. Plants open stomata to take in more carbon dioxide, but at the risk of losing water vapor. So the isotopes can yield the plant’s water use efficiency, or the balance between the amount of water lost and the rate of photosynthesis. 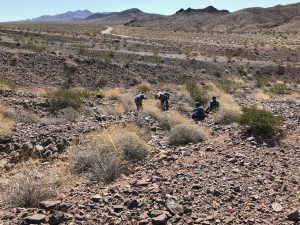 Visiting a long-term observation site in the Mojave Desert.

The results show that the brittlebushes increased their water use efficiency by 53-58% over the 39-year study period. That’s remarkably high, nearly double the increase in efficiency in forests over the same time period.

Temperature is rising and humidity is decreasing in the Mojave Desert, Driscoll says. “This increase in water-use efficiency shows that the leaf physiology of these plants has adjusted in response to this added water stress and increased availability of CO2.”

Researchers have proposed that increasing CO2 levels may be a benefit to plants like the brittlebush, allowing it to get the same amount of CO2 with smaller stomatal openings, reducing water loss. So far, though, forests haven’t demonstrated an increase in growth along with an increased water use efficiency.

“While we can’t say anything about the implications for shrub growth,” Driscoll says, “we did find that increases in water-use efficiency were substantially larger in deserts than they are in forests.” 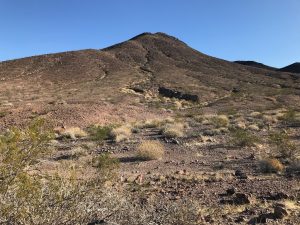 The researchers observed increased water use efficiency in some plants that had been sampled throughout the entire study period, showing acclimation by individuals, as well as by the whole shrub population, to changing conditions.

These shrubs can have lifespans of 30+ years and establishment of new plants occurs infrequently,” Driscoll says, “so we can’t rule out the possibility that generational changes will also occur if the populations are observed over longer timescales.”

So does this finding mean that the brittlebush and other desert shrubs will be able to weather future warming? We can’t yet say, Driscoll says.

“While it’s possible that more efficient use of water could translate into growth, survival or flowering benefits for these plants, we don’t yet know if the change will confer advantages or mitigate potential declines in the population.”

After publication, find the full study here. The paper may appear online anytime during the week of July 27.