The 2017 university calendar features hidden gems from around campus and is now available to order or pick up at the Campus Store.
Janelle Hanson

An ever-present feature in offices across campus, the University Print & Mail Services Calendar has become a trusted resource for faculty and staff for nearly two decades. If the university had an official calendar, it would be this one, as it is the go-to source for academic dates, deadlines and most importantly to many, payday schedules.

The 2017 university calendar, which makes its debut this week, is a particularly special one that brings together artifacts and storytelling, shining a light on some of the university’s most precious—and underappreciated—treasures. Some moderately prominent and others quite obscure, each has a story to tell that you have likely never heard before.

“I love this calendar,” said Jane Bushnell, director of Print & Mail Services. “The narratives bring the photos to life—it’s a special piece and we’re so excited to share it with campus.”

Produced annually by University Print & Mail Services, the calendar is now available for purchase or department order here. Calendars may also be purchased at the University Campus Store.

Here’s a sneak peek of some of the calendar’s featured gems. 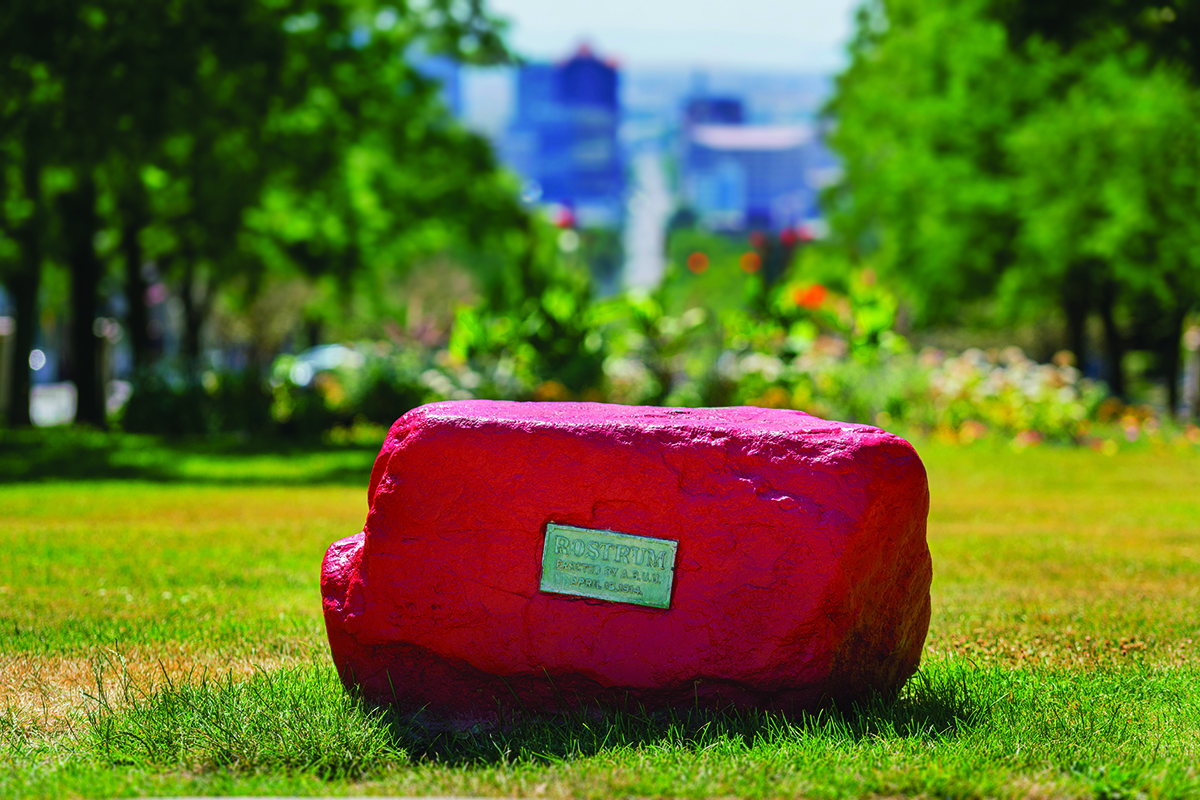 Since its arrival on campus in 1914, this boulder has had a colorful past. True to its name, the “Rostrum” served as a pulpit for public speaking and has helped many an orator build an audience in the Presidents Circle. Countless layers of paint tell a different story, though, of the ongoing rivalry between freshmen and their upperclassmen counterparts. Originally painted red with a white Block U, the Rostrum turned up green shortly after its arrival on campus—a nod to the freshmen “greenies” responsible for the prank. For over a century, the back-and-forth antics have continued with the last green-turned-red Rostrum appearing in 2016. 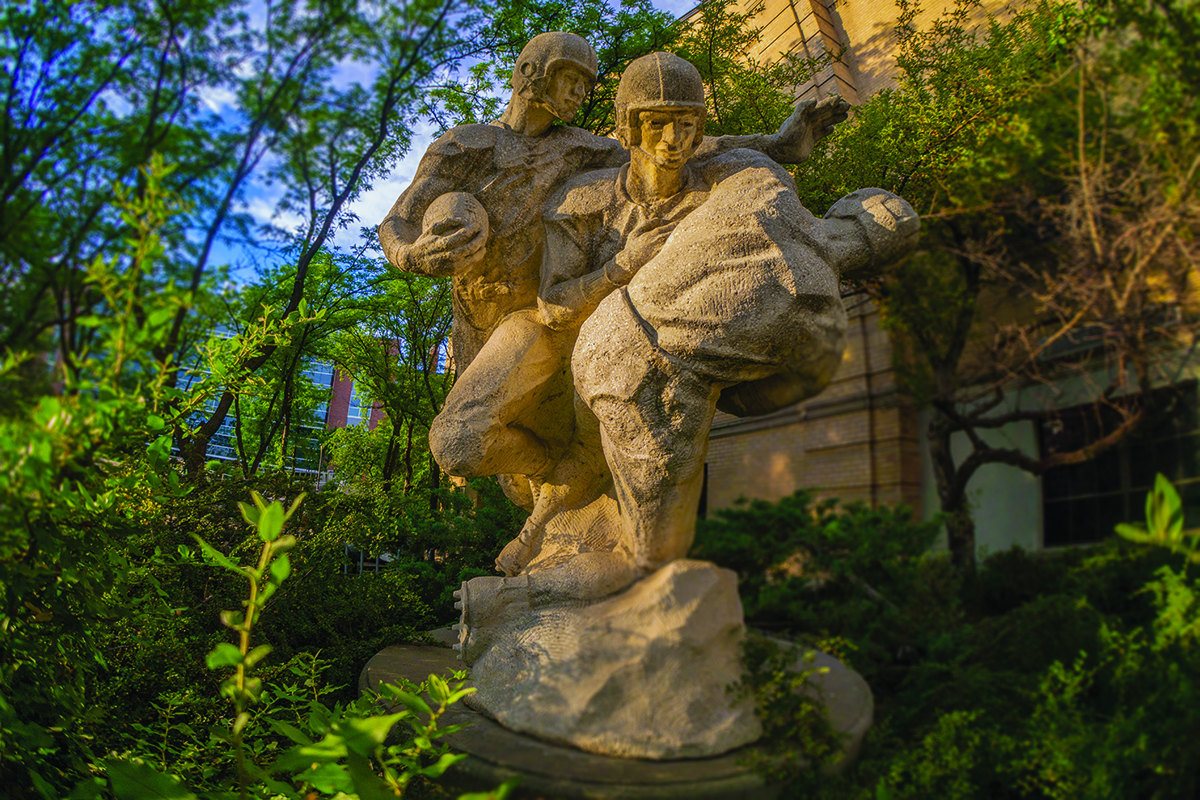 Plasteline, iron, wood, wire, clay, plaster and concrete—these seven media comprise “Teamwork,” sculpted by U student David Orton Maxfield. The subject of his master’s thesis in fine arts, Maxfield sculpted the piece in 1951 and produced a written companion thesis that details its many structural phases, as well as the sculptor’s inspiration. “The work features three figures to form a symbolic point of view,” Maxfield wrote. “One to represent the forces that man is individually unable to cope with and two other figures to represent man collectively overcoming these forces through cooperation.” Desirous of making the statue authentic in costume and form, Maxfield solicited the help of Utah Football coach Jack Curtice who provided technical advice and uniforms, by which Maxfield designed the 7-foot players engaged in play. 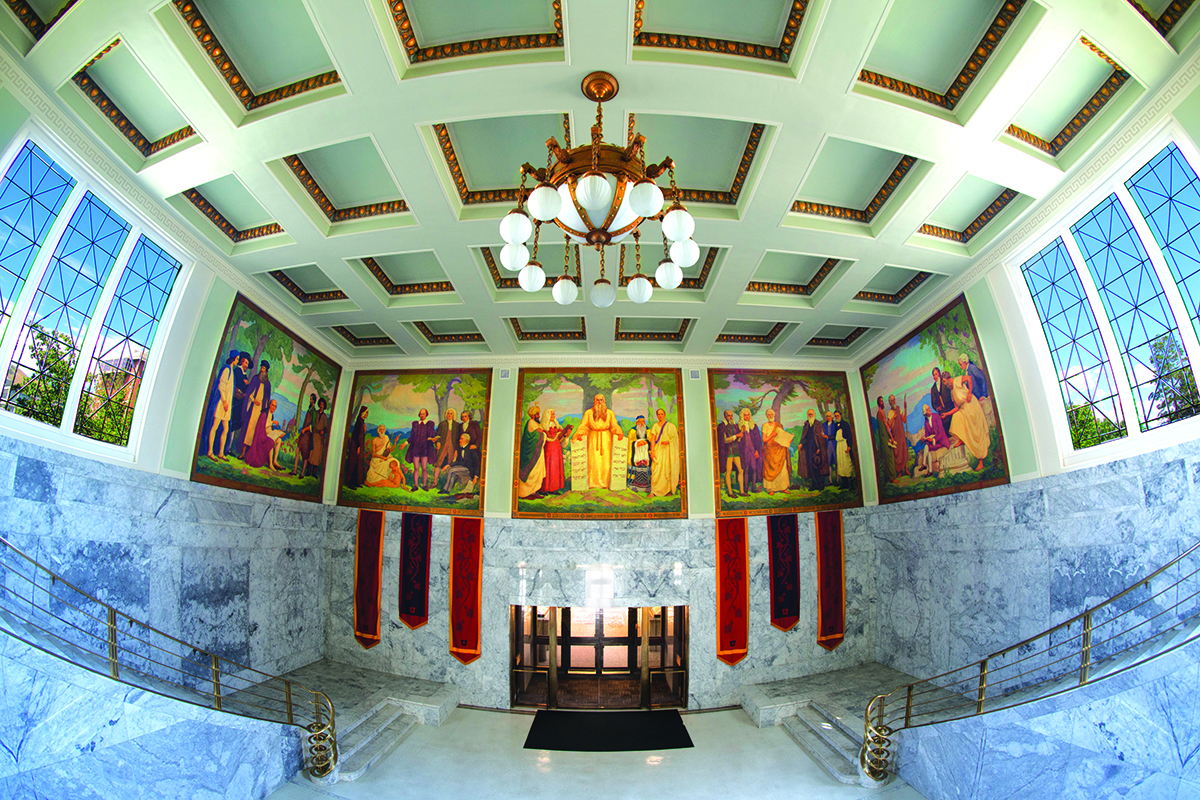 At 11.5 feet tall and 13.5 feet wide, the Park Building’s iconic “Great Men of Knowledge” panels took artist Lee Greene Richards five years to paint and many more years to research and design. A tribute to academia, the mural depicts some of history’s most influential thinkers, from William Shakespeare to Sir Isaac Newton. The work was completed in 1940 during Richards’ near 10-year term as a lecturer for the university. Among Utah’s foremost portrait painters, Richards’ murals adorn the state’s capitol rotunda and many other works can be found throughout campus. 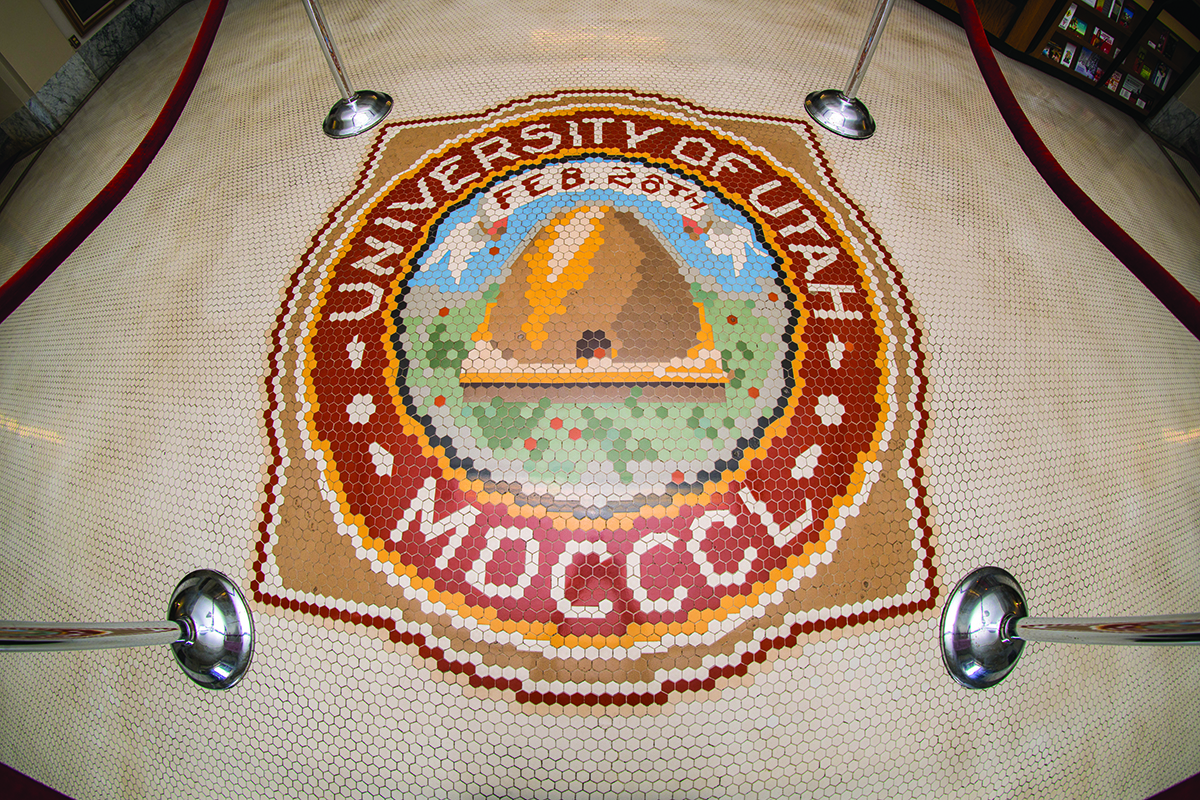 Commemorating its founding in February of 1850, this honeycomb tile mosaic of the University of Utah seal graces the main hall of the Park Building. At the time of its founding, the institution was actually known as the University of Deseret, not adopting its current name until 1892. The Park Building is an adaptation of a former name as well, coming five years after the structure was completed in 1914. Originally called the Central Building, the name was changed in 1919 to honor the university’s first president, John Rockey Park. 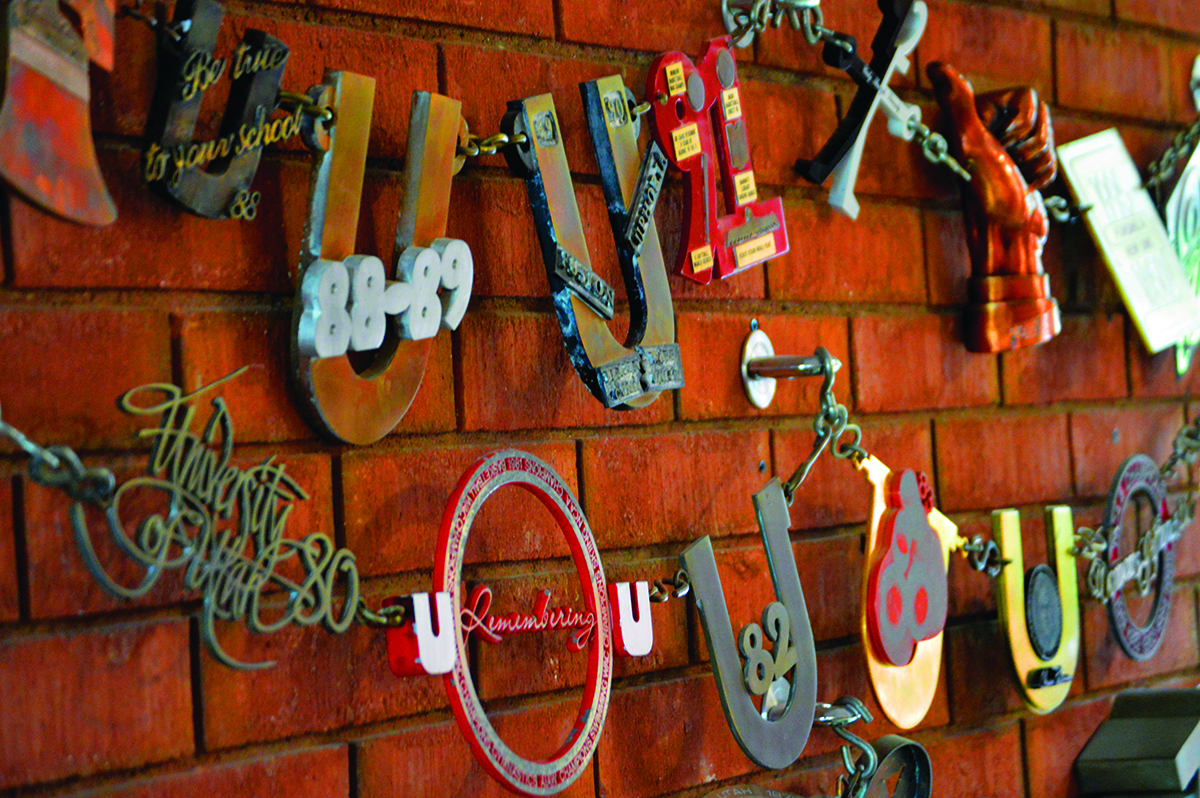 Connecting the past with the present—quite literally—is the Alumni Association’s Class Link Wall. Beginning with the Class of 1920, all but one graduating class has added a link to the chain, marking their year and occasionally commemorating a significant event. Athletic championships, man’s first moonwalk and the assassination of JFK are among the historical events reflected in this metallic chronicle. The chain tradition, initiated by professor Adam S. Bennion in 1919, was intended to symbolize the ties that forever bind University of Utah alumni together. 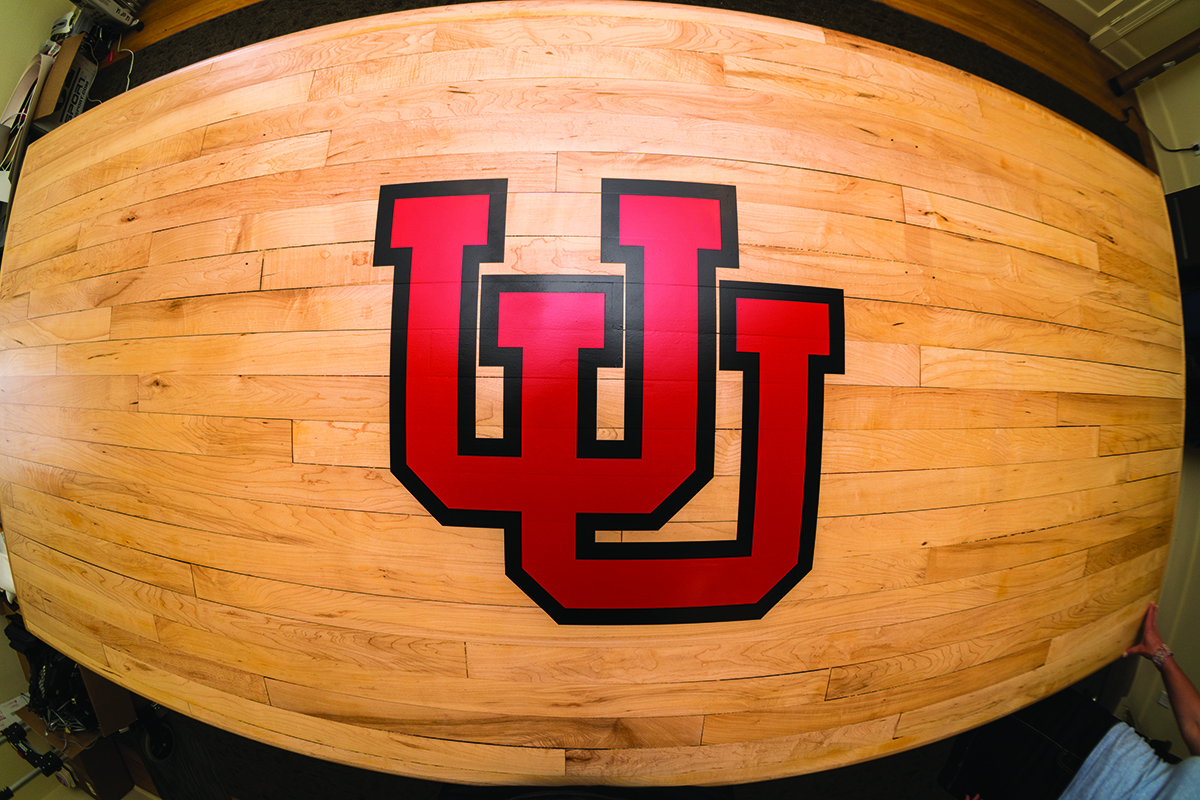 After years of silence in the depths of the Huntsman Center, these boards return for a second chance at life with a legacy engrained within. Upon them, many games were played and one of basketball’s most beloved rivalries was born.

Now fashioned into a table, these maple planks were once part of the original floor of the Special Events Center, now the Huntsman Center, which opened in 1969. Underfoot many an athlete, graduate or performer, this floor has hosted countless events but one was particularly memorable—the 1979 NCAA Final Four Championship. Beneath the silver dome, soon-to-be NBA greats Larry Bird and Magic Johnson battled for the title as the Indiana State Sycamores took on the Michigan State Spartans. Outscoring Bird 24-19, Johnson led the Spartans to victory, defeating Indiana 75-64 and winning MSU’s first national title. To this day, it remains the highest-rated game in televised college basketball history and marked the beginning of the epic rivalry between Johnson and Bird.