Surely there is a “Fredism” that fits this occasion. You know, one of those cowboyesque, biblical-style sayings that Fred Esplin is known to have at the ready to sum up any situation.

Maybe: “Well, there’s an embarrassment of riches here.” Or: “Looks like the cow finally got out of the barn.” 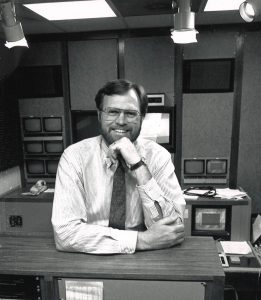 At the end of January, Esplin stepped down as vice president for institutional advancement, the capstone of his 40 years at the U. He joined the U in 1979 as director of marketing for KUED Channel 7. He was selected as general manager of KUED in 1981 and later also served as associate director of media services and the Utah Education Network. Esplin was appointed as a vice president in 1999.

A Cedar City native, Esplin will continue to work on projects for the university on a part-time basis. “I’m glad I can ramp down and not go cold turkey,” he said.

Esplin has a barn full of accomplishments at the U. Among them: Helping to conceptualize the Utah Education Network; raising the profile and production quality of KUED; establishing a professional marketing operation for the university; helping convince the Utah Legislature that Utah should adopt an educational pathway for undocumented students; and leading one $1.65 billion capital campaign for the U and launching a second.

That block U symbol that is now ubiquitous on campus? Yep, Esplin was a major force behind that becoming the university’s primary logo, too.

Esplin was working on a master’s degree in communication at the U when the Public Broadcasting Service—PBS—was created. He was immediately intrigued by the possibility of using television to enlighten, enhance culture and improve the human condition through knowledge.

But he received a job offer from the National Institutes of Health (NIH) in Maryland, where he had served an earlier internship, and temporarily sidelined his studies to take it. Esplin later completed his degree with a thesis on former President Richard Nixon’s administration use of telecommunications policy to pursue political objectives.

During this time, he got to know famed Washington Post columnist and investigative reporter Jack Anderson, who had just won a Pulitzer Prize for stories on the U.S.’s secret policy negotiations with Pakistan during the Indo-Pakistani War of 1971.

His career prospects at the NIH were short-circuited after Esplin co-wrote a column with Anderson about veterans who opposed the Vietnam War. From NIH, he moved to the public affairs office for PBS, where he did publicity for Bill Moyers, the documentary production group NPACT (which preceded Frontline) and created a viewer’s guide to the Nixon impeachment hearings.

Esplin left Washington, D.C., for a job with the PBS affiliate in Harrisburg, Pennsylvania, and then returned to Utah to work at KUED. He was just 34 when he was named general manager of the station.

His career in public broadcasting taught him the critical fund-raising skills he would later draw on as he moved into development positions at the U. It was Esplin who shifted KUED’s programming to a new level, bringing in British comedies such as “Monty Python’s Flying Circus” and “Fawlty Towers” while pushing its production of documentaries that brought Utah history to life.

Mary Dickson, former director of community relations for KUED, describes Esplin as a personal hero, mentor to many and giant in this community.

“It was thanks to Fred’s leadership that KUED finally got a state-of-the-art broadcast facility with the Eccles Broadcast Center,” Dickson said. “Under his director, the station gained a national reputation for its local productions and reach. He leaves a rich legacy that has benefited so many people and, I am certain, he will continue to have a huge impact in this community.”

Of his many accomplishments, Esplin is particularly proud of the role he played in helping convince the Utah State Legislature to become the third state in the nation to open access to higher education for undocumented—or Dreamer—students.

“We’ve had to fend off several attacks on that law, but it’s allowed countless talented students to pursue a college education,” Esplin said. “Growing up in Cedar City, I saw how hard life was for the local Paiutes. I am hardwired to try to help people if you can, and this seemed like a really good way to help young kids who want to improve their lives by going to college. It’s basic fairness.”

A close second might be his efforts to help the U engage more fully with alumni, community supporters and foundations—work that has helped lift the university’s profile and its accessibility. “I’ve always enjoyed untangling knots, and I’ve been given the assignment of untangling a lot of knots over the years,” Esplin said. And what’s next? Family history projects, managing the family ranch and volunteer work with refugees.

Esplin leaves the U wistful, perhaps surprised at how quickly 40 years flashed by, and, most of all, grateful. “I never imagined in my wildest dreams I would have the opportunities I have had,” he said. “I feel very fortunate. I really do.”

There is a Fredism that might have set the course all those years ago: “If the stars align in the heavens, and it looks like they’re gonna align.”