By Jim Breitinger, director of marketing for the Natural History Museum of Utah and Chanapa Tantibanchachai, associate science writer

On Feb. 10 at 7 p.m. in Kingsbury Hall, a full auditorium waited anxiously for the start of “An Evening with Astronauts Mark and Scott Kelly,” the first in the 2016 Natural History Museum of Utah’s Lecture Series lineup. 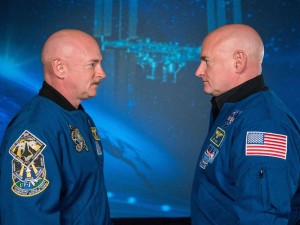 Not so much a lecture, the night consisted of an informal conversation between retired U.S. Navy captain, astronaut and engineer Mark Kelly and NHMU’s executive director Sarah George. From the twins’ journey to both becoming astronauts for NASA to the difficulties of living in space (e.g. lack of gravity means you have to Velcro everything down, otherwise objects would float away), Mark Kelly answered a series of both lighthearted and thought-provoking questions.

“When you take off, the ship goes from 0 to 17,500 mph in eight and a half minutes,” said Mark Kelly as he described the feeling of taking off in a spaceship.

“It certainly puts a dent in your back,” he quipped.

The live conversation was kept moving in large part by breaks for pre-recorded video clips of Scott Kelly from a live Q&A he participated in December 2015 with the museum and a group of local middle schoolers. The transitions between video clips of Scott Kelly and live discussion with Mark Kelly were seamless, with Scott Kelly’s pre-recorded comments spurring additional commentary from Mark Kelly on the same subjects.

“I miss it every day. Nothing comes close to the feeling of being up there,” Mark Kelly answered when asked if he missed space.

As the night came to a close, the conversation steered towards future space exploration, namely in Mars, and the benefits of risking human lives rather than sending robots.

“I think humans are explorers; it’s the nature of the human spirit to want to go to new places,” Mark Kelly said. “I don’t believe the capacity of human intelligence has been matched by artificial intelligence yet, and an astronaut on Mars could achieve much more than a robot could. We’ll need engineers, physicians, geologists and astrobiologists to go up there and work together. I believe it’ll be a group of people who are currently in their 20s who will make the trip up there maybe sometime in their 40s.”

“Maybe the first person to go to Mars is in this very auditorium.”

A Q&A with Jim Breitinger, director of marketing for the Natural History Museum of Utah, on how he became personal friends with the Kelly twins.

When did you meet the Kelly brothers?
I met Mark before Scott exactly 10 years ago in February of 2006.

Where did you meet him?
I was in Tucson, Arizona, to see my friend Bryan take command of an F-16 squadron. We were at an officer’s club bar on a base after the ceremony having a little party. The room was filled with U.S. Air Force fighter pilots in green jumpsuits. We were having a few beers, pretzels and wings.

A gentleman walked in to our party in a blue jumpsuit. Clearly out of place, someone went over to see who he was. Soon he was being introduced to everyone: “Hey guys, this is Mark Kelly, a NASA astronaut!” Mark was also a naval aviator.

He had arrived in Tucson to see his girlfriend at the time, Gabby Giffords. He had a little time to kill so he hung out with us for a while.

How did you manage to stay in touch after that initial meeting?

This was one of those fun encounters that for whatever reason was sticky. I chatted with Mark that day. We had some common friends (what were the odds?), exchanged phone numbers and stayed in touch.

At that time I was an active Wikipedia editor. A couple of months later a friend of mine in Phoenix, where I was living, had a fundraising party for Gabby Giffords who was making her first run for Congress. The morning of this party I decided to create a Wikipedia article for Gabby. Over the next few years I was the primary author of her Wiki article and started spending a lot of time on Mark’s too.

Also, during this time, I became a meteorite dealer and blogged about my adventures traveling around the country in my Airstream selling meteorites. Mark and Gabby followed my blog and he eventually even bought a meteorite from me.

So when and how did you meet Scott?

On his third space shuttle mission in 2008, Mark invited me, along with a hundred of his closest friends and family, to come see the launch in Florida. I lucked out in that I went and he actually launched on time—a relatively rare occurrence in the shuttle program. At his launch I met his brother Scott, also an astronaut.

Mark and Scott have participated in two events for Natural History Museum of Utah in the past two months. How did you manage to make that happen?

My friendship with Mark is one of those cool things that sometimes happens in life. I emailed Scott to wish him luck just before he took off for his Year in Space mission last year, and almost on a whim asked him if he’d be willing to speak with school children from the International Space Station at the Natural History Museum of Utah. Scott readily agreed, hooked me up with the right people at NASA and we made it happen. We had our live talk with the ISS on Dec. 3. All of us who were there had a blast and walked away saying “Did that really just happen? Were we really just chatting with some dude in space?”

I am the marketing director at the museum and later convinced my colleagues to bring Mark in as our keynote lecturer for this year’s lecture series on Feb. 10. 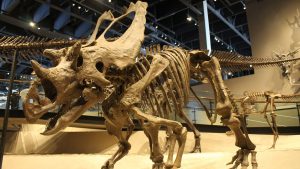