One of the most common finch species – the medium ground finch – may face extinction within several decades due to parasitic flies that infest their nests, according to a new study done at the U.
Janelle Hanson

In 1835, a young Charles Darwin visited the Galapagos Islands off mainland Ecuador. Among the animals he studied were finches. He noted varying beak shapes and sizes on different islands. How the beaks of different finch species were adapted to different diets helped illustrate Darwin’s theory of evolution by natural selection. More than a century later, they became known as Darwin’s finches. 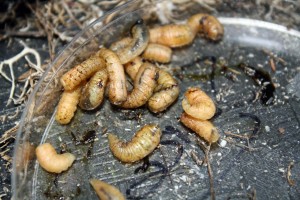 But one of the most common finch species – the medium ground finch – may face extinction within several decades due to parasitic flies that infest their nests, according to a new study by University of Utah biology professor Dale Clayton, his former doctoral student Jennifer Koop, mathematics and biology professor Fred Adler and others.

And if one of the most common Darwin’s finch species faces trouble, so might the other species, of which there are at least 14 and possibly 18, the researchers say. One of those, the mangrove finch, already is on the brink of extinction.

Yet the same study, based on mathematical simulations, has some good news too: People can save the birds if they take action against the flies and their larvae, which first arrived in the Galapagos in the 1960s and first were documented in bird nests there in 1997.

“Our mathematical model also shows that a modest reduction in the prevalence of the fly – through human intervention and management – would alleviate the extinction risk,” Clayton says.

Several approaches may be needed, such as introducing fly-parasitizing wasps, removing chicks from nests for hand-rearing, raising sterile male flies to mate with females so they can’t lay eggs in finch nests, and using insecticides, including placing pesticide-treated cotton balls where birds can collect them to self-fumigate their nests.

The self-fumigation method was tested successfully in a previous study by Clayton and another of his doctoral students, Sarah Knutie, who also is a co-author on the new study and now is a postdoctoral fellow at the University of South Florida. The new study’s other co-author is former Utah mathematics postdoctoral fellow Peter Kim, now at the University of Sydney, Australia.

Click here to read the full news release about the study.