Need one more getaway before buckling down for the semester? Here are two road trips through signature Utah landscapes to two unique works of art.

Robert Smithson’s “Spiral Jetty” on Great Salt Lake and Nancy Holt’s “Sun Tunnels” in Utah’s Great Basin Desert are among the world’s most iconic works of land art. Scholars, critics and tourists jet in from all over the world to see them. Lucky for you, each is just a day trip from the U.

“In the 1960s and 1970s a group of artists began pursuing a vision of art in conversation with the natural world, freed from gallery walls,” says Whitney Tassie, senior curator at the Utah Museum of Fine Arts (UMFA) at the University of Utah. “Smithson and Holt were in the forefront of this movement, and each found in Utah’s otherworldly landscapes the ideal sites for their projects.” 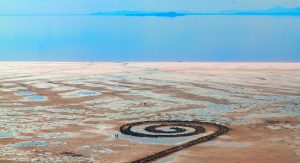 Smithson’s “Spiral Jetty” (1970), the artist’s masterpiece, is a monumental coil of black basalt rock and earth that juts off Rozel Point in the north arm of Great Salt Lake. Driven by obsessions with geologic time and with the idea that matter is in a perpetual state of falling apart, Smithson became captivated by the eerily reddish water he found in the lake’s northern reaches. “Spiral Jetty” is, as the artist intended, vulnerable to natural processes, particularly fluctuations in the water level. In its nearly 50 years of existence, the earthwork has been fully submerged, completely exposed (as it is right now) or in a state of flux somewhere in between.

It’s just a two-hour drive north from Salt Lake City, but the journey takes you off the beaten path and through historic terrain, including Golden Spike National Historic Site, where the nation’s first transcontinental railroad was completed. A worthwhile destination itself, Golden Spike is also your last chance for water and restrooms before the final unpaved miles to “Spiral Jetty.”

If you want company when you visit “Spiral Jetty,” and the opportunity for deeper immersion, mark your calendar for Saturday, Sept. 29, when the UMFA and Great Salt Lake Institute at Westminster College (GSLI) will host a community meet-up at the site. You can make art, talk to curators and scientists and meet fellow art lovers and adventurers. 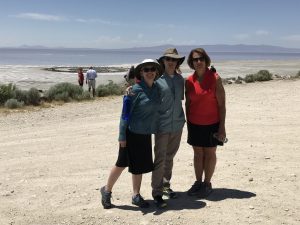 “Sun Tunnels” (1973–1976), created by one of the few women associated with Land art, communes with both land and sky, bringing “the vast space of the desert back to human scale,” as the artist said. Made of four massive concrete tunnels arranged in an X pattern on the desert floor, “Sun Tunnels” functions as a lens, framing not only the desert but also the rising and setting sun on the summer and winter solstices. Each cylinder is also pierced with smaller holes in the pattern of four constellations—Draco, Perseus, Columba and Capricorn—so that changing astral arrangements of light and shadow are cast onto the tunnels’ interior surfaces throughout the day.

While it’s ideal to view “Sun Tunnels” on the solstices, the site is worth visiting any time weather permits. The trip, about a four-hour drive to a remote part of the west desert, just requires a little planning. Gas up at Wendover, Nevada and keep an eye out for the Cowboy Bar in Montello, Nevada—if it’s open, you can ask locals about the road conditions you’ll encounter over the final twenty or so miles.

While both “Spiral Jetty” and “Sun Tunnels” are sited in Utah, they’re owned by Dia Art Foundation in New York City, which works in concert with the Holt-Smithson Foundation. The UMFA partners with both foundations and with Great Salt Lake Institute at Westminster College and the Center for Land Use Interpretation to steward these works and to promote local learning and appreciation of their artistic value.

Explore these artworks for a more expansive view of the remarkable landscapes that make Utah such a fascinating place to live. As always in wild places, savor the journey but leave no trace of your presence, on or around the artworks or the surrounding landscape. Click here to plan your visit. 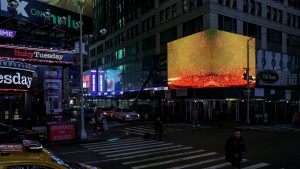