Every year, tens of thousands of wildland firefighters risk their lives to save timber, forests and property from destruction. Before battling the flames, they identify areas to where they can retreat, and designate the best escape routes to get from the fire line to these safety zones. Currently, firefighters make these decisions on the ground, using expert knowledge of fire behavior and assessing their ability to traverse a landscape.

Now, a University of Utah-led study has developed a mapping tool that could one day help fire crews make crucial safety decisions with an eagle’s eye view.

The new study is the first attempt to map escape routes for wildland fire fighters from an aerial perspective. The researchers used Light Detection and Ranging (LiDAR) technology to analyze the terrain slope, ground surface roughness and vegetation density of a fire-prone region in central Utah, and assessed how each landscape condition impeded a person’s ability to travel. 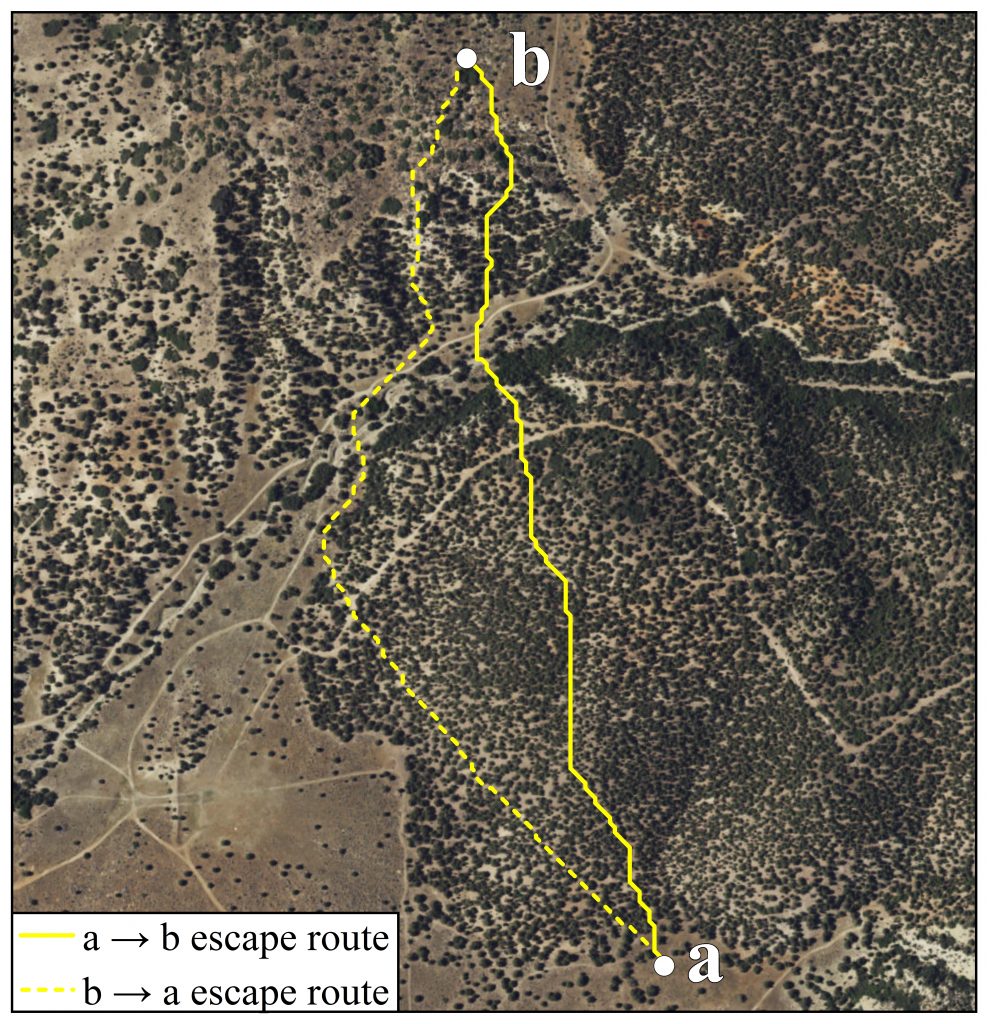 This is one of the thousands of simulations evaluating potential escape routes within the study area.

“Firefighters have a great sense for interactions between fire and landscape conditions. We hope to offer to them an extra tool using information collected on a broad scale,” says lead author Michael Campbell, doctoral candidate in the U’s Department of Geography.

Department of Geography professor and co-author, Philip Dennison, adds, “Finding the fastest way to get to a safety zone can be made a lot more difficult by factors like steep terrain, dense brush, and poor visibility due to smoke. This new technology is one of the ways we can provide an extra margin of safety for firefighters.”

The findings were published online on Sept. 26, 2017, in the International Journal of Wildland Fire.

Firefighters identify escape routes by assessing the landscape on the ground. The three conditions that determine how efficiently a firefighter can move through an area are terrain steepness, or slope, vegetation density, especially of plants in the understory and ground surface roughness, such as a boulder field or a well-maintained dirt road.

The study used a combination of LiDAR, geographic information systems, and human volunteers to examine how landscape conditions impact a person’s ability to travel within Levan Wildland Management Area in the foothills of Utah’s Wasatch Mountains.

The volunteers timed themselves walking along 22 paths that the researchers designed to capture a variety of slopes, ground surface roughness and vegetation densities. The researchers compared these travel times to LiDAR-derived estimates of the three landscape conditions along the transects, and extracted their effects on travel rates.

“A lot of it is intuitive; if you’re walking through dense vegetation, you’re going to move more slowly than you would through a field of grass. But we found that no-one had quantified just how much vegetation density or surface roughness can slow you down,” says Campbell.

After assessing travel impedance, Campbell ran thousands of simulations evaluating potential escape routes within the study area. He chose random starting points representing a crew location, and random end points representing a safety zone. By plugging the effect of slope, ground surface roughness and vegetation density on travel rates into a route-finding algorithm, he successfully identified the most efficient routes.

The volunteers timed themselves walking along paths that the researchers designed to capture a variety of slopes, ground surface roughness, and vegetation densities.

Quantifying landscapes from the sky

Currently, firefighters base all of their decisions on ground-level information using fire safety protocols, such as the Incidence Response Pocket Guide. The guidelines recommend avoiding steep slopes, dense vegetation, and rough ground surfaces when designating an escape route.

“It’s built into the safety protocol, but there are no numbers behind it. What is steep? Is it steep uphill? Downhill? What is dense vegetation?” asks Campbell. “Using LIDAR information, we were able to turn it from these subjective judgement calls into something more robust and quantitative.”

LiDAR is unique in that it has the ability to map both understory vegetation and ground surface roughness at very high levels of precision. The technology is sensitive enough to pick out individual bumps, rocks and boulders on the ground surface with a resolution of 10 cm per pixel.

The result of a LiDAR data collection effort is a 3-D ‘point-cloud’ containing millions of points that record the longitude, latitude and elevation of the structural features that make up a given landscape. When combined with the LiDAR-derived landscape conditions, firefighters can apply existing route-finding algorithms to the data to identify the path of least resistance.

By plugging the effect of slope, ground surface roughness and vegetation density on travel rates into a route-finding algorithm, Campbell successfully identified the most efficient routes.

LiDAR data currently aren’t well-suited to real time mapping of evacuation routes, because they can take a long time to process and coverage is limited in some regions. However, land managers in areas with high wildfire risk could prepare the data ahead of the fire. With the LiDAR information in hand, firefighters could run the route-finding software to identify escape routes in real-time.

“The goal is to turn this into a tool that can be implemented in a realistic sense,” says Campbell. “Because our work is sponsored by the U.S. Forest Service, we hope to get our tools into the hands of people on the ground, and turn it into something that’s used in a fire-fighting scenario.”