Not sure where to eat while simultaneously enjoying the summer weather? Look no further than the Marriott Library Plaza.
Clare Duignan

When I first volunteered to review food trucks for @TheU, I was initially filled with excitement (now I have a real excuse to eat out—who wouldn’t love that?) and slight regret. Regret because I thought this would take a big hit to my wallet. Food trucks, in my mind, are all about overhyped, overpriced, fusion comfort food. The Bento Truck pleasantly proved me wrong.

The menu, like most food trucks, is limited. You could get a regular-sized chicken bowl, a shrimp tempura bowl, a combo bowl, or gyoza bowl for $5.50. A large size of any bowl would cost you roughly $2 more. The menu also offered boxes of each meat, which are larger portions and cost $8.

I ordered the Combo Box, which generously came with two pieces of tempura shrimp, teriyaki chicken, 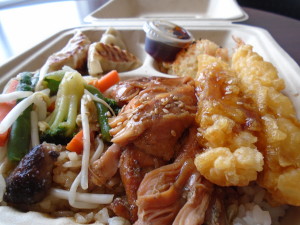 a small scoop of wasabi potato salad, three pieces of gyoza, a small container of gyoza dipping sauce, vegetables and a bed of rice. That’s much more food than I would usually order for one meal, but I just had to try a bit of everything…it’s all for the sake of good journalism, right?

I dove into the box cautiously and started off with the chicken teriyaki. The chicken was tender and the teriyaki sauce drizzled over it was just right. The problem I generally find with chicken teriyaki is either too much sauce, which ends up overpowering the chicken, or not enough, and it tastes like regular chicken with a few sad drops of sauce. But not Bento Truck’s chicken teriyaki: The sauce was evenly distributed, the sauce’s consistency was favorable and the flavor packed a punch.

Next up: shrimp tempura. After the trip from the Bento Truck back to my office, as well as the 10 minutes of picture-taking for this article and my Instagram (which I took with my office door closed because I was too embarrassed for anyone to catch me artfully placing the box of food in the perfect lighting for photos), I expected the shrimp to be a bit soggy. Again, Bento Truck proved me wrong. The shrimp tempura came through for me and retained the right amount of crunchiness, even after all the time I took choosing the right Instagram filter to properly display the box.

The most interesting thing in the box was definitely the wasabi potato salad. Just hearing the word “wasabi” struck a bit of fear into my heart and I admit that I started eating the potato salad with an extreme bias against it. My first experience with wasabi was an awful one at a cheap Chinese buffet—need I say more?  However, the potato salad was surprisingly not bad. The wasabi flavor was just strong enough for me to taste its presence, but not so strong as to burn my nose. Did I love it? No. Was it a good, creamy contrast to everything else in the box? I’d say so.

I can’t say I’m a gyoza expert of any kind and honestly just love them so much that I overlook any differences in quality when I eat them at different places. I’d say Bento Truck’s gyoza were pretty standard. I can, however, speak to the gyoza sauce. Generally, gyoza sauces are too bland or sweet for me and I have to add soy sauce, but this one did not require any altering. It was so good, in fact, that I was afraid they didn’t give me enough for my three pieces of gyoza (I like ’em saucy!), but a little goes a long way and I only used a third of the tiny container. I used the rest on my vegetables, because I hate to actually taste my vegetables and try to cover them in as much unhealthy sauces and toppings as possible.

The vegetables included broccoli, bean sprouts, carrots, peas, green beans and something I couldn’t quite distinguish. If I had to give my best guess, I would say it was cauliflower. I’m not very good with vegetables, though, so don’t take my word for it.

All in all, The Bento Truck exceeded my expectations and I would definitely go again. The value you receive for your money is phenomenal, and you won’t break your college budget if you splurge on a $5.50 bowl every now and then. During the summer, the Bento Truck is on campus 11 a.m.-3 p.m. every weekday. During the school year, they close a bit later. An exact time wasn’t given, but it sounds like closing time is flexible and dependent on demand. So no, you can’t skip or leave class early for Bento Truck. It’ll be right there waiting for you with its well-seasoned chicken teriyaki and crispy shrimp tempura.

Chanapa Tantibanchachai is a communications specialist at University Marketing and Communications. If you have an interesting story idea, email her at chanapa.t@utah.edu.