National Voter Registration Day kicks off with the U’s participation in the Campus Cup, a state-wide, voter-registration effort. The challenge pits each of Utah’s colleges and universities against each other every two years in a competition to register the greatest percentage of voters.
Connor Morgan, president, Associated Students of the University of Utah

Register to vote online, at utah.turbovote.org.

Use #UVote whenever posting on social media about the upcoming election.

On Tuesday, Sept. 25, the Associated Students of the University of Utah (ASUU) is planning to register as many students, faculty, and staff to vote as possible. The ASUU Government Relations Board will be tabling from 10 a.m.–2 p.m. on Tanner Plaza, between the Student Union and the Student Services buildings. While getting registered to vote, attendees can also grab lunch at the nearby food trucks and play with service dogs-in-training from Labs for Liberty. 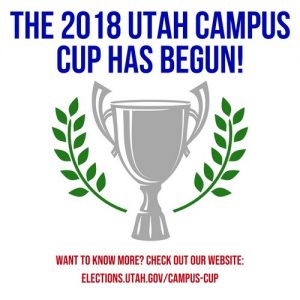 This National Voter Registration Day event also kicks off the U’s participation in the Campus Cup, a state-wide, voter-registration effort sponsored by the office of Lieutenant Governor Spencer Cox. The challenge pits each of Utah’s colleges and universities against each other every two years in a competition to register the greatest percentage of voters.

Utah State University currently holds the cup, but the University of Utah is striving to win this year. While ASUU is coordinating efforts in this competition, a host of other offices and organizations—such as the Hinckley Institute, the Andrew Goodman Foundation, Voto Latino, Voterise, and others—are partnering in order to boost the U’s voter registration efforts.

The Campus Cup competition addresses the rampantly low voter registration and turnout rates nationwide among college students. Only 43.6 percent percent of students between 18 and 21 years old voted in the 2016 national election. ASUU and its partner organizations seek to increase these rates for the 2018 election.

The U’s registration and turnout rates performed well in both 2012 and 2016 compared to many of our peer institutions in Utah and across the country. Yet, only 72.8 percent of eligible student voters were registered to vote in 2016—an 8 percent decrease from 2012—and only 56.7 percent of our students voted in 2016, according to the National Study of Learning, Voting, and Engagement.