What could be better than a beautiful day up at Red Butte Garden learning about science? At Earth Connection Camp, interns from the University of Utah’s Native American Research Internship (NARI) — a summer-long science immersion and outreach program for undergraduates from across the country — joined researchers and tribal elders in encouraging Native American youth to get excited about science. The camp leaders gave hands-on demonstrations in topics ranging from ethnobotany to medical sciences in hopes of building a lasting interest in STEM. 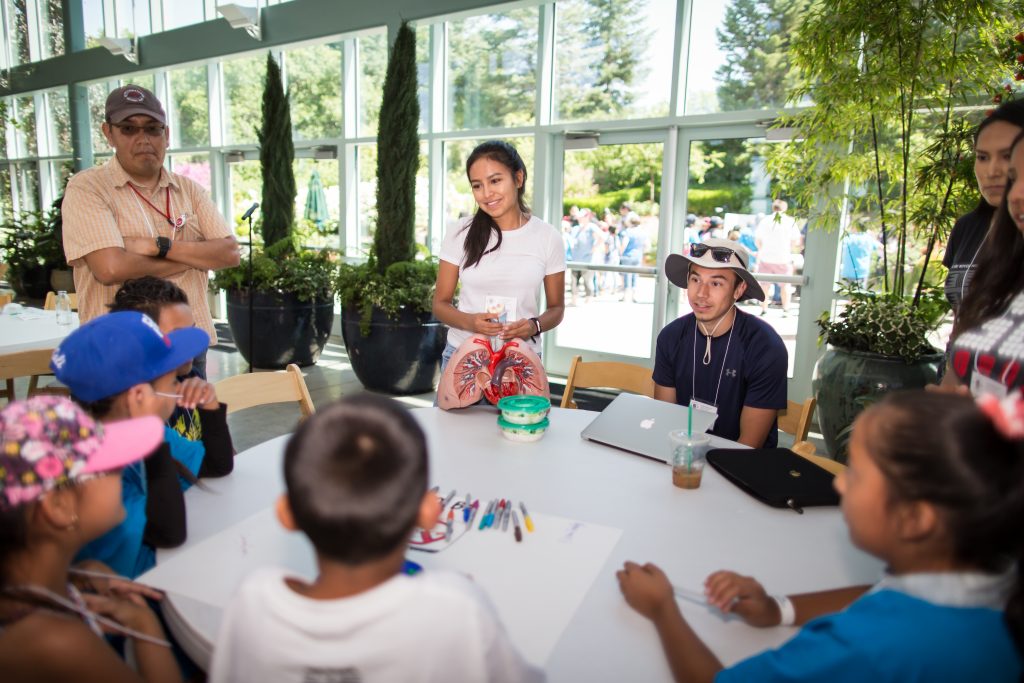 Daryan Singer, NARI intern, described to the kids just how much damage smoking cigarettes can do to the bodies vital organs.

Daryan Singer, a junior studying psychology at the University of Arizona and current NARI intern, described to the kids just how much damage smoking cigarettes can do to the bodies vital organs, especially ones like their own still-developing lungs. Kids cringed as they caught a whiff of the carcinogen-soaked cotton balls. Most children know that smoking is bad, but Singer’s break down of the science behind the scenes left the groups of elementary students pledging to stay tobacco-free.

But in the shadow of shiny science exists a pattern of exclusion toward minority populations in advanced STEM careers. Comprising only 0.6 percent of the total STEM workforce, American Indians and Alaskan Natives are the most underrepresented of any minority groups in the United States. Growing in size and influence, a movement to encourage involvement in these areas is underway.

Currently, in its eighth year, the NARI program has seen 109 scholars, 81 of whom graduated with a bachelor’s degree, with 19 accepted into graduate programs and 18 accepted into medical school. The program, which has represented 41 tribal nations since 2010, boasts a 100 percent completion rate.

The resounding theme of Earth Connection camp, which was to bring together the two worlds of western science and traditional cultural wisdom for American Indian youth, is echoed in the core concept of the NARI program which provides Native American undergraduate students who are interested in science, guidance and experience with careers in STEM fields.

“The traditional teachings and modern teachings mesh well,” Singer said. “They all intertwine; they don’t contradict each other.”

Singer, who is a member of the Navajo nation, experienced firsthand these complementary aspects early on as she learned about the world around her from two fronts. In her family, she found different, but equally important perspectives as she pursued her education. Her mother, who set an example for her as far as pursuing education, and her grandfather, who is a medicine man, helped Singer cultivate a deep and abiding appreciation for clinical care grounded in cultural understanding.

“A lot of us talk amongst ourselves about how there [are] not a lot of minority groups that we see around the hospital, clinics or laboratory setting,” Singer said. “So, I think it’s a great opportunity because it sets the road for the kids back home.”

Native Americans are particularly underrepresented in medicine. When a health care provider is needed, they have to be called into a reservation. These physicians are usually non-native and run the risk of being less culturally sensitive to their patients’ needs. Singer believes that due to the shortage of Native American physicians and psychologists, there may be initial hesitation and reluctance to seek out medical help when it is needed.

Singer has found her focus on minority health and health disparities, and she plans to work in mental health outreach, research and prevention geared toward Native American and Alaskan native youth.

Programs like NARI help minority students pursue higher education and careers in advanced fields. They also show Native American youth that these doors not only exist but are open to them as well.

“It’s time for a new generation to come into the clinical health field, back on the reservation,” Singer said.