When sociology professor Theresa Martinez came to the University of Utah in 1990, it was a different place. Martinez, a Chicana from New Mexico, recalls Utah being very homogeneous, which probably doesn’t come as a surprise. But in addition to the lack of diversity, she found that the environment in her department was, for the most part, not welcoming, nurturing or supportive. While Martinez was appreciated and supported by faculty and administrators outside her department, she consistently struggled within it.

She worked alongside faculty who taught from the controversial 1994 book “The Bell Curve,” which argued, among other striking claims, that immigration to the United States should be reduced so as to increase the average IQ in the U.S.

“It was hard — really hard,” acknowledges Martinez, remembering her reality more than 20 years ago. “It’s an emotional thing.”

Nearly 30 years later, U administrators recognize that the university still has work to do in creating a welcoming and inclusive environment for all students, faculty and staff, but it is working passionately to achieve that goal.

In fall 2016, the U celebrated its largest incoming cohort of faculty and postdoctoral fellows from underrepresented backgrounds. Nineteen new hires took positions across main campus. This represented nearly half of all the new main-campus hires for the academic year.

“This is a historic achievement for the U,” said Associate Vice President for Equity and Diversity Kathryn Bond Stockton. “It demonstrates that there is a tremendous commitment from the highest levels of the university to do everything we can to make sure that we’re creating a diverse faculty for our students and for our intellectual life.”

Research continues to point to the benefits of diverse groups for decision-making, problem-solving and creativity. In a 2014 Scientific American article, professor Katherine W. Phillips from Columbia Business School wrote about finding how being around people who are different results in more creative, more diligent and harder working individuals.

“If we are lucky enough to have a diversifying student body, we certainly want our faculty to reflect that diversity so our students feel a deep-seated sense of belonging to this intellectual community,” said Stockton. “We want students from every type of background to see that careers are open to them in every possible field. We want them to know that they belong in these fields.”

You Spoke, We Listened

An open dialogue on racial climate was held on campus in November 2015.  Students, faculty, staff and administration attended. “We heard things that humbled and deeply moved us,” said President David W. Pershing, Senior Vice President for Health Sciences Vivian S. Lee and Senior Vice President for Academic Affairs Ruth Watkins in a letter distributed to campus the week after the event. “We also heard that we must accelerate change at the U, in order to address injustices, create a stronger, better university and foster a community that is truly welcoming to students, faculty and staff from all backgrounds.”

Three weeks after the town hall meeting, the administration released 13 plan-of-action responses that promised meaningful change, many of which had already begun.

Among the changes already under way was an open initiative to accelerate and support recruitment of faculty and postdoctoral fellows from diverse backgrounds. Before a search even begins, committees meet with a consultant from the Office of Equal Opportunity who provides basic information about the importance of considering a diverse pool of candidates. To build such a pool, the Office for Equity and Diversity offers guidance on a number of topics, including how to write listings, where to advertise openings, and who candidates might wish to meet when they’re on campus.

In addition to the faculty hiring initiative, the U launched a new School for Cultural and Social Transformation in fall 2016. The new school is the first in the Intermountain West to focus on the intersection of race, gender and social justice issues. The school not only elevates the

Gender Studies and Ethnic Studies programs to academic divisions, but it also allows the programs to directly hire and grant tenure to faculty.

The plan also included the development of a mentoring plan for all junior faculty. The College of Humanities was selected to pilot a new mentoring program in fall 2016 because it welcomed 11 new tenure-track faculty members at that time, eight of whom are from underrepresented racial/ethnic backgrounds and nine of whom are women. The new program involves a semester-long mentoring workshop for new faculty in place of teaching a class. The workshop, led by English professor Vincent Cheng (who has been at the U for nearly 20 years), focuses on developing a cohort and sense of camaraderie among new faculty and helping them establish a network of mentors. 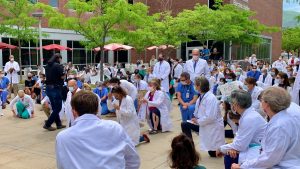 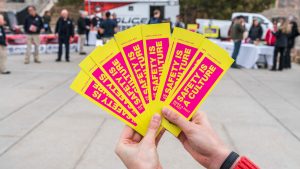 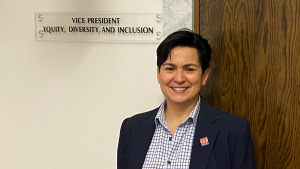