A NEW SEASON IS COMING

From medical marijuana to Medicaid expansion, this election season is packed with hot-button issues—and that has set the stage for a fact-filled, informative third season of “The Hinckley Report.”
Clare Duignan 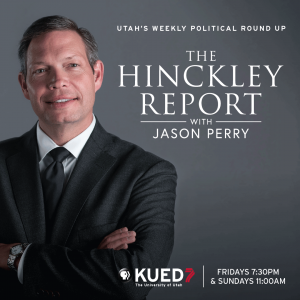 From medical marijuana to Medicaid expansion, this election season is packed with hot-button issues—and that has set the stage for a fact-filled, informative third season of “The Hinckley Report.”

The show’s new season debuts on Friday, Sept. 7 at 7:30 p.m. on KUED Channel 7 with host Jason Perry, director of the University of Utah’s Hinckley Institute of Politics. The station rebroadcasts episodes on Sundays at 11 a.m.

“There really is nothing like ‘The Hinckley Report’ in the state of Utah,” Perry said in a press release. “Every single week, we get to hear from the experts about the issues impacting Utahns. You go away informed. You go away wanting to become engaged, and hopefully, you learn a few things.”

KUED, in partnership with the Hinckley Institute, launched the issue-focused series in 2016, modeling it after “Washington Week” on PBS. Like that show, “The Hinckley Report” features a roundtable of political reporters and political observers discussing current political news.

This season is already taking shape. On Friday, Sept. 21, “The Hinckley Report” will present an hour-long analysis of ballot initiatives before Utah voters—issues Perry says “everyone in the state” will be talking about.

In addition to the legalization of medical marijuana and expansion of Medicaid, Utah voters will be asked to consider creating an independent redistricting commission. Voters also will consider several amendments, including changing the time of military service required to qualify for a property tax exemption; allowing a tax exemption for property leased by a governmental entity; and allowing the legislature to convene a special session with certain restrictions.

The show has found a solid audience, with one viewer commenting that it provides the “most depth and analysis of the state legislative sessions I have ever seen.”

“It’s meaningful to me that we can bring these local topics, stories, and insights to viewers on a weekly basis,” said Lisa Olken, KUED director of content. “Local programming is most successful when it’s relevant, insightful, original and speaks to Utahns. ‘The Hinckley Report’ does just that.”