Thomas Lund, a professor of law at the S.J. Quinney College of Law, recently published “The Creation of the Common Law.”
Clare Duignan

Thomas Lund spent more than 30 years researching his new book, “The Creation of the Common Law,” released earlier this year. The book discusses medieval cases that have never before been analyzed for modern readers. A professor at the S.J. Quinney College of Law, Lund is a renowned legal historian whose latest work is drawing parallels to the famed “The Da Vinci Code.”

“It is a staple of popular fiction — ‘The Da Vinci Code’ is a prominent recent example — for a scholar, 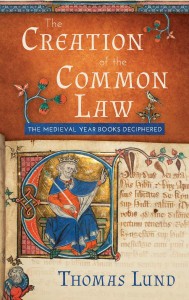 after inspired and painstaking work, to reveal hidden mysteries encoded in ancient manuscripts that alter our understanding of ourselves and our civilization.  Remarkably, the legal scholar Thomas Lund, has, in real life, done just that,” said Stephen B. Presser, a professor of legal history at Northwestern University School of Law, of Lund’s book. “Here, after hundreds of years, is a readable, brilliant, and deep study of the sources of the basic principles of the Anglo-American legal system still in use today — the medieval Year Books — until now utterly inaccessible except to a few specialists in the most arcane legal history.  This amazing and delightful book will be of profound interest to anyone who has ever believed that the rule of law is about more than the arbitrary machinations of politicians.”

Lund recently spoke to @TheU about his new book and what its findings present to the legal community:

Q: Why have you spent 30 years on this project?

A: Although 8,000 pages of translations of case reports from the early years of the English common law have been published, no one knows what they mean. I decided to devote my career to figuring out their meaning. After all, they chronicle the birth of the legal system that governs one-third of the world’s population. As I spent 25 years writing articles, I gradually became an expert medieval lawyer. I then realized the lost cases explained the magical moment when the English common law diverged from European legal systems. I invested the last five years in writing the book to explain this event.

Q: Why couldn’t other scholars understand the reports?

A: The reports were written by medieval lawyers for their own use, and they omitted information they already knew. No one during the past 500 years has understood the omissions. I say I “deciphered” the cases because they were in a form of code, the code of a body of information that is incomprehensible unless the reader knows other information.

Q: What value does your work have for modern law students?

A: By understanding the creative period of our legal system, students can better understand what the legal system has become. In addition the reporters created the case reports as tools to teach lawyers how to convince judges — in many ways the reports are better vehicles for teaching lawyering skills than modern reports.

Q: How has the new book been received so far?

A: Certainly comments on the book have been gratifying. The chair of Princeton’s history department, a medieval historian, described the book as a “stunning achievement,” and a professor of legal history at Northwestern praised the book as “one of the most important works on law in this generation.” My work appeals to two different disciplines: history and law. I expect the book and my unique knowledge should be a resource for students of both fields. I’ve already excited some interest as a speaker on these important developments. This summer, along with Justice Anthony Kennedy of the United States Supreme Court, I will give a keynote speech about the early cases at the Utah Bar Convention, and in November I will speak about the same subject at New York University.

Melinda Rogers is a communications specialist at University Marketing and Communications. Got a story idea for her?  Email: melinda.rogers@utah.edu