To gauge the potential impact on the American population, he led a study demonstrating that the new blood pressure guidelines could affect tens of millions, many of whom have health conditions or other characteristics that were not tested in the trial. The findings have spurred a needed, healthy debate over who should undergo intensive blood pressure control and how to best implement treatment.

“We wanted to add real-world meaning to the data so that physicians and patients would know what the results might mean for them,” says Bress.

With an insider’s view on issues that matter to patients, and informed approaches for addressing them, clinical scientists like Bress are valuable assets to the health care system. And yet these specialists are becoming a rare breed. Among physicians, the number that perform research declined by 5.5 percent between 2003 and 2012, according to a survey by the American Medical Association (AMA), and all signs point to their numbers dropping even further.

An innovative comprehensive mentoring program for new clinical research faculty, the University of Utah Vice President’s Clinical and Translational Research Scholars Program (VPCAT), is doing its part to move the needle in the right direction. A strong measure of success, 92 percent of the 86 VPCAT graduates to date have received extramural funding during their two years in the program, collectively earning $43 million. Moreover, 95 percent have since remained in academic medicine, in stark contrast to a national retention rate of 50 percent. A case study on VPCAT was published in Academic Medicine, on Dec. 8, 2015.

“VPCAT is modeled on the premise that mentors’ collective experiences provide a strong foundation for junior faculty to build from in order to launch their own careers,” says program founder Carrie Byington, M.D., professor of pediatrics, co-director of the Center for Clinical and Translational Science (CCTS), and vice dean of academic affairs and faculty development. 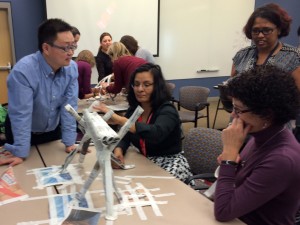 In addition to an intensive curriculum that includes leadership building and grantsmanship, VPCAT scholars are paired with multiple faculty and staff mentors from across the health sciences. A unique aspect is that in addition to scientific, senior and peer mentors, they meet with research administrators who coach them in navigating the complex world of research funding. They are also taught to be their own best mentors.

“Through VPCAT I learned how to look out for those opportunities that could boost my career, and how to prioritize my work to make sure the most important things get done,” says Bress. “This experience has opened doors for me.” His blood pressure research garnered national attention, launching new projects and partnerships.

Byington speculates that the multilayered web of support is conducive to success, particularly for those who may have trouble identifying with the pool of mentors in a traditional one-on-one, top-down mentoring system. Statistics support the idea that a different mentoring model could increase inclusion. To date, 53 percent of VPCAT scholars are women and 12 percent are underrepresented minorities, a significant change from national demographics of clinical scientists, which falls at 30 percent and 5 percent, respectively. “We’ve created a nurturing environment that helps junior faculty to thrive, regardless of their background,” she says.

The statistics are particularly relevant at a time when equity and inclusion are becoming hot button issues. Imbalance in the workforce threatens the diversity of research ideas, which could ultimately limit who is likely to benefit from them, according to Byington.

A case in point, current VPCAT scholar Lori Gawron, M.D., M.P.H., assistant professor of obstetrics and gynecology, was inspired by an unmet need she observed in her clinic. Women with Crohn’s disease and other chronic conditions routinely experience complications during pregnancy, at times leading to serious symptom flare-ups and premature births. In collaboration with Katherine Sward, Ph.D., R.N., associate professor in the College of Nursing, she is developing a decision support tool to guide chronically ill women during their reproductive years.

Gawron says she was drawn to the University of Utah because she knew she would have the opportunity to do the research she cares about. “VPCAT sets an overall tone of support for junior faculty who are interested in research. The culture here is very unique because of that.” Since becoming a scholar in 2015, she has been awarded two grants to fund her work.

The mentorship program was originally launched in 2008 to foster success among clinical investigators in pediatrics and child health. In response to demand, it expanded to serve all of health sciences in 2013. In 2016, the program will take on trainees from the College of Social and Behavioral Science on the University of Utah main campus, and from Intermountain Healthcare.

“Other universities have started to contact us to ask how they can emulate the mentoring model we’ve built,” says Byington. “There is nothing else quite like it out there.”

Listen to Byington talk about the challenges to building a robust, inclusive physician-scientist pipeline.