The Utah Board of Regents on Thursday approved the University of Utah’s proposal to waive a tuition increase until January, pending a fall review of health and economic impacts of coronavirus.

The U requested a 2% tuition increase and no change in student fees, equivalent to a 1.7% overall increase. President Ruth Watkins said the U modified its request in response to the global pandemic.

The U originally considered a 2% increase for the academic year ahead, but “would like to hold that at zero for summer and fall 2020 and implement it in January 2021 if the conditions are appropriate to do so,” Watkins told the regents.

That means the U will forego $4.4 million for the full 2020-21 academic year and, instead, receive $2.2 million to support its operations if the increase is implemented in January 2021.

That money will be allocated to critical campus needs, including campus safety, equity and merit pay, and employee salary adjustments approved by the Utah Legislature.

Chief Financial Officer Cathy Anderson said the U will still move forward with the pay increase between July 1, 2020, and January 1, 2021, using one-time cash.

Watkins said deferring the tuition increase until January will require the U to dip into rainy day and other funds and to hold off on filling some open positions.

Referring to the $4.5 million that would have been generated with a full year increase, Watkins told regents, “I don’t want anyone to go away with the impression that this won’t be difficult for the University of Utah.” But, she added, this approach will help the U continue its focus on helping students stay in school and get their degrees.

The U is firmly committed to doing all it can to help students cross the degree finish line, Watkins said. Toward that end, the U has invested in measures that make the U both accessible and affordable through scholarships and financial aid tools, including the For Utah and other scholarships and the Invest in U program.

More than half of U students work part-time jobs that have likely been impacted by physical distancing and other measures aimed at slowing coronavirus, Watkins said. To assist students in need, the university enhanced an emergency fund, using contributions from ASUU, donors and the institution. The Feed U pantries also are open and helping students as needed.

AnnaMarie Barnes, president of the Associated Students of the University of Utah, endorsed the plan.

“I deeply appreciate that the University of Utah has listened to students and amended its 1.7% tuition increase proposal timeline as such,” Barnes said.” Having this increase take effect in 2021 instead of 2020 will allow our students to prioritize their emotional and academic well-being during a time of great financial uncertainty.”

The Board of Regents also approved differential tuition for two new programs: master of athletic training ($1,900 per semester) and master of science in cardiovascular perfusion ($3,105 per semester).

Earlier this spring, the Student Fee Review Committee voted to end a fee used for print newspaper distribution on campus and instead use that fee for a programming and feasibility study of a new Union Building and to enhance the Campus Connect app. Barnes said the Union Building was built for a campus community of roughly 9,000  students, but now serves more than 32,000.

Collectively, the systemwide tuition and fee increase for institutions of higher education in Utah for the 2020-21 year is approximately 1.9%.

The U’s tuition remains the lowest among all Pac-12 and Big 10 institutions, based on 2019-20 tuition and fees for a full-time resident undergraduate. This year, the U is ranked No. 14 in the nation by the Wall Street Journal for providing the best higher education value.

The U also has positioned efficiency as a as core goal and has implemented measures aimed at conserving energy use and reducing costs of construction projects.

By 2021, nearly two-thirds of the university’s electricity will come from renewable sources. In the past year, the U used 18% less water, saving 87 million gallons and $500,000.

The university avoided costs of $18.5 million by using a value engineering design approach on four new or in progress buildings, including Gardner Commons and the Garff Executive Education Building. 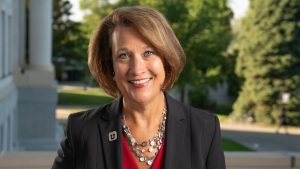 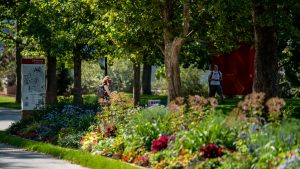