Your freedom to read

You’ve seen the list of books that have been either banned or challenged for one reason or another, a list that includes everything from “The Adventures of Tom Sawyer” to “Harry Potter.” 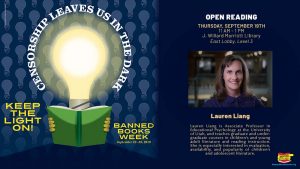 Free speech and what it means in our society, what it looks like exactly and who is entitled to it is a topic of hot debate. Intellectual freedom—the right to access books and other media without censorship—is of equal importance and can also be controversial.

“Challenges to remove a book from a library or school may come from an individual or a parent organization or a local religious or political group,” said Lauren Aimonette Liang, an associate professor in Educational Psychology. “A challenge goes beyond someone simply saying, ‘I don’t like this book’ or even ‘I don’t want my children to read this book.’ A challenge often contains ‘Big Brother’ undertones as it expresses ‘I don’t believe anyone should read or see this book, and I want it permanently gone.’ ”

While academic libraries are less likely to come under attack for the content of their collections, there is an important reason to increase awareness about the practice of banning books.

“Every day some book attracts criticism for one reason or another,” said Alberta Comer, dean of the J. Willard Marriott Library and university librarian, “While we respect that person’s opinion, we must provide access to a wide variety of viewpoints and content. Sometimes the very thing that makes a book controversial is something about which we need more awareness and discussion.”

On Thursday, Sept. 19, 2019, the J. Willard Marriott Library will host a Banned Books Open Reading from 11 a.m. to 1 p.m. on Level 3 of the library. Students, faculty, staff and members of the community are invited to read a passage from any book or play that has been banned or challenged in the past.

Associate professor Lauren Aimonette Liang will be this year’s featured speaker. Liang will discuss the importance of free and open access to literature for juveniles.