Although all tickets have been distributed, limited room for some walk-ins is available just prior to the start of the program.

Watch a full Faraday Lecture with Louie and Richmond here.

Watch a clip from an Armentrout-Wight lecture here.

For a few nights each December, the chemistry lecture hall at the University of Utah fills to the brim. Throughout the evening the hall fills with laughs, oohs, ahhs and more than one explosion. The audience, many of them children, provide the oohs. Chemistry professors Janis Louie and Thomas Richmond provide the explosions.

For 37 years, the U chemistry department’s Faraday Lectures have brought booms, pops and colors to Utah’s holiday season. Louie and Richmond are continuing and modernizing the Faraday Lectures and bringing chemistry to an ever-diversifying audience.

The Faraday Lectures are named for English chemist Michael Faraday, who began offering annual chemistry lectures at London’s Royal Institution around Christmastime. Faraday intended for his lectures to be enjoyed by children and the public. “This was in the era where they were discovering new elements like sodium or potassium,” Richmond says. Tossing either of those elements into water would produce a small explosion—and a lesson on chemical reactivity.

One of Faraday’s well-known lectures concerned the chemistry of a candle. Accordingly, Louie and Richmond begin their lectures by walking into the darkened hall, carrying candles. Shortly, however, the room is aglow with the combustion of Christmas “ornaments” made of highly flammable guncotton.

Utah’s Faraday Lectures began in 1981 with U chemistry professors Ronald Ragsdale and Jerry Driscoll, dressed in top hats and tails to evoke Faraday’s Victorian-era London. After packing chemistry lecture halls for 23 years, Ragsdale and Driscoll handed the reins to Peter Armentrout and Charles Wight. “Because of Chuck’s expertise in explosives, they did a lot of Faraday candle experiments,” Richmond says.

In 2012, Wight left the U to serve as president of Weber State University, and chemistry department chair Cynthia Burrows approached Louie and Richmond about taking up the torch. This year’s show is their sixth, partnered with chemistry associate professor Jeff Statler, who sets up the experiments behind-the-scenes.

Each show is unique

Absent from their show is the full costume of lectures past. “You don’t traditionally see women in top hat and tails,” Louie says. “We took that as an opportunity to modernize it. I wear a tuxedo-inspired dress, Tom is in a tuxedo as well. We keep the spirit of the top hat and tails while bringing it into the modern century.”

The clothing may have changed, but many of the experiments remain the same. “There are some demonstrations that one can say are the standards,” Louie says, “because they’re just so much fun and the audience loves them.” 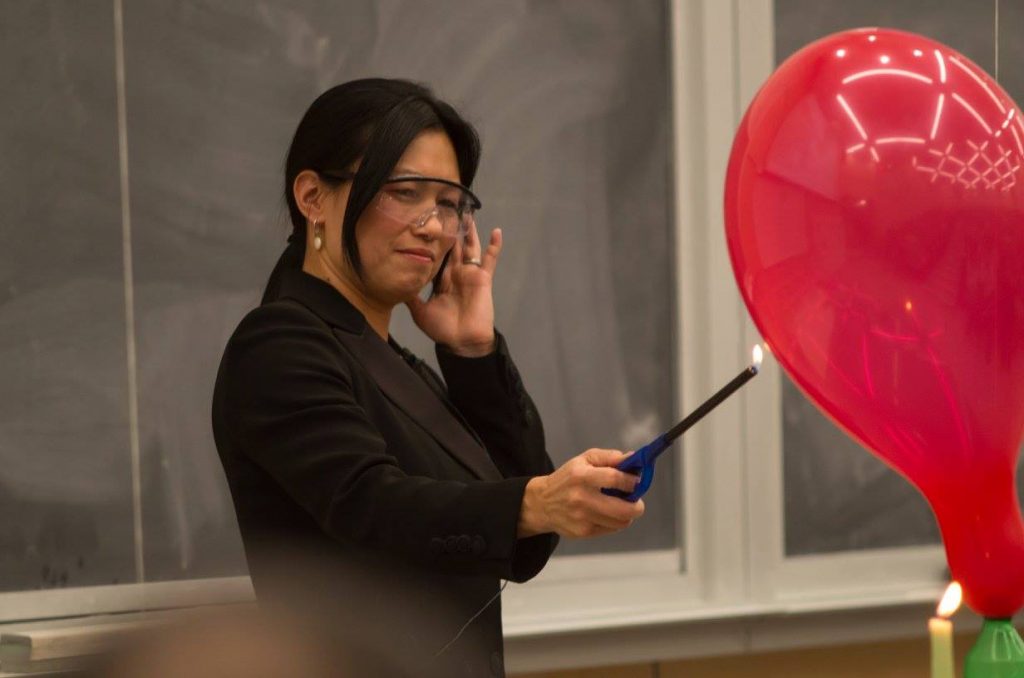 Chemistry professor Janis Louie prepares to combust a balloon during a Faraday Lecture.

They’re not all explosions. In one demonstration, Louie mixes a series of liquids together that, when combined and spun in a flask, create the brilliant silvered surface of a holiday ornament. In another, she calls audience members up and asks them to link arms to show how a polymer works. Then she creates one before the audience’s eyes, peeling nylon out of a beaker of chemicals. Richmond provides a lesson on the amount of energy released by metabolism—by burning a corn chip. “It looks like a good emergency candle!” he says.

Richmond says he hears from audience members if they don’t perform a favorite experiment. One of the favorites, he says, is the combination of aluminum and iron oxide to form thermite. “When those two mix, they get so hot that the iron that’s produced is molten iron,” Richmond says. “You get lots of sparks coming up. That’s the same reaction that was used to weld together the rails on the TRAX line.”

Another audience favorite is comparing the effects of different gases on the performers’ voices. Helium makes people’s voices rise in pitch because it’s lighter than air. Another gas, SF6, has the opposite effect. “We had fun this last year reversing roles,” Richmond says. “I used to be Darth Vader and got the deep voice, but the audience probably enjoyed hearing Janis with the deep voice even more.”

This year, Louie and Richmond expanded the show to three performance nights instead of two. “Maybe 80 to 85 percent of each night is the same,” Louie says, “but if you wanted to come all three nights, you’d see something different each night.”

And there’s demonstration turnover from year to year as well, they say, to keep the show fresh for loyal attendees who come every year. This year, Louie and Richmond will attempt to relight a candle from a distance. “The smoke that you see still contains a lot of fuel for the candle,” Richmond says. “And if you can catch that smoke some significant distance away from the candle, the flame will travel back down to the wick and relight the candle.”

It’s not their first attempt at this demonstration, though. Not every experiment works every time. “It’s fair to say that we allow serendipity to happen and fold that into the show,” Louie says. “We have a live audience and can chalk it up to ‘That’s real life.’”

Richmond says that one year he attempted to demonstrate what happens when a cell phone battery explodes. “It worked great when we tested it,” he says, “but we just got a little smoke and no fire from the battery. That was one that didn’t work.”

Such hiccups are rare, though. The show has been drawing Utah audiences for so many years now that people who attended the early lectures as children are now bringing their children. 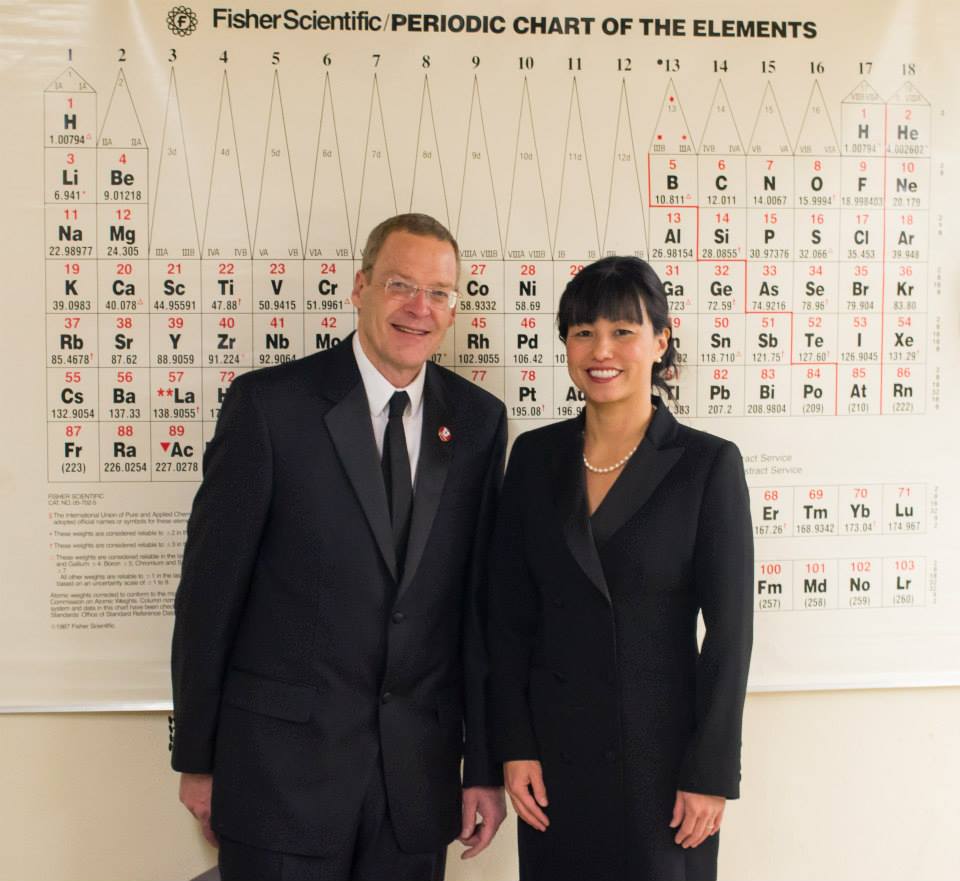 Brooks Brady is one of those. A member of the U College of Science Advisory Board, Brady remembers demonstrations from the Ragsdale-Driscoll era.

“One of my favorite demonstrations was the one where they showed how strong bases and acids reacted violently with other materials,” Brady says, “then professor Ragsdale promptly mixed them together and drank the solution. What better than a death-defying feat to capture the attention of young people!”

Brady appreciates how public events like the Faraday Lectures give the public a view of the professors training the next generation of scientists and engineers.

“I want my children to come away from the Faraday lectures with both an excitement for the fun of chemistry as well as a sense of confidence that, while chemistry principles might seem esoteric, my children have the capability to learn and master chemistry if they have the good fortune to choose it as a course of study,” Brady says.

“I think it’s a tribute to the whole Faraday operation,” Richmond adds. “We’re on our third generation and we’re still going strong.”

Grateful for the loyal fan base, Louie and Richmond are always looking for ways to expand and diversify the show’s audience. Richmond says colleagues from the physics department attended last year and told him afterwards, “I didn’t know about this!”

Louie has found that her part in the Faraday Lectures has a particularly positive effect. “It’s been really rewarding to see young girls and their mothers and fathers come up to me and say ‘I love science and math, and I was afraid that I wasn’t supposed to.’ It’s been rewarding to encourage them and hopefully inspire them that if they truly love it then they should absolutely stay on that path.”

There are other multimedia outreach efforts to include people who can’t make it into the auditorium. Previous years’ lectures were filmed and aired on KUEN. The Faraday at Home site contains instructions for at-home chemistry experiments. Students in science teaching courses at the U produce animated videos depicting how certain demonstrations work.

At its heart, all of the entertainment value of the Faraday Lectures is geared toward teaching the audience a little more about how the world works. “The audience appreciates that both Tom and I, in these lectures, are quite playful,” Louie says. “We try our best to be dynamic and engaging and entertaining while yet still infusing a little bit of ‘this is how it works.’”

“I do think these are a valuable part of how the U interacts with the community,” says Richmond. “We’re the University for Utah. That’s one of the reasons I enjoy this.”

Do you have memories of attending a Faraday Lecture? Have the lectures had an impact on your life? Share your story on social media with the hashtag #UUFaraday or write to paul.gabrielsen@utah.edu. 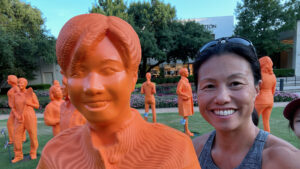