Utah Across Utah Tour: Focus on the economy in Eastern Utah

As the locals tell it, it takes two hours to get from Roosevelt to Salt Lake City, but seven and a half hours to travel from the capital city to Vernal, a longtime energy hub on the eastern edge of Utah.

University of Utah President Taylor Randall and other university leaders stepped into the breach Aug. 15-16, taking Utah Across Utah Tour to Eastern Utah to learn how Vernal achieves a small-town economic balance of old and new and determine what role—if any—the U. can play in the rural powerhouse.

“We want the university to be an asset to our state, and we feel like we have an obligation to serve,” Randall told local leaders gathered at Swain’s steakhouse for dinner, listing the university’s Six Commitments to the state. “I would love to hear what you need from us.”

On the fourth leg of his statewide tour, Randall and U. research and student engagement leaders traveled to the Uintah Basin, Wasatch and Summit counties. The first day of the tour focused on Vernal’s existing and emerging industries and higher education research and student completion initiatives. Day two traversed Park City—from Main Street to Utah Film Studios to Olympic Legacy Park. Read about the Park City visit here.

At times, the Uintah Basin can seem split in two: 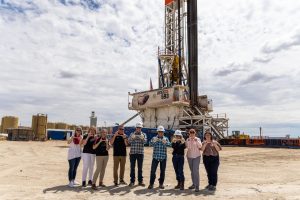 On one side, the much-maligned oil and gas industry has boomed and busted for decades, but when times are good provides $80-$90,000 salaries without a college degree. On the other, is the gleaming Utah State University extension building in Vernal and a modern “Innovation Hub” with co-working spaces, a podcast room and free 5G broadband internet.

Residents are fiercely proud of the equilibrium between their historic extractive energy economy, which dates back to the late 1800s, and the new industries and education options providing expanding opportunities to the region’s young people. Uintah Wax’s leaders point out their oil is used in industrial lubricants, textiles, crayons and heat pumps—applications with much lower carbon footprints than traditional petroleum.

“We need your help telling our story. Everyone here knows the story because we live it,” said Jake Woodland, senior service landsman with Finley Resources’ Uintah Wax subsidiary. Virtually every modern convenience depends on energy, Woodland said. “There’s a whole different world that supports who you are and the life you enjoy. My kids get to see both sides—the technology, the energy resources and the rural lifestyle. It’s the best of both worlds.”

“Energy extraction and transportation is an important part of our economy,” Bennion said, “but long-term we need to be a lot smarter about where our jobs come from. We’ve gone through the ups and downs of the oil and gas industry. We’re pretty tired of living through those.”

Providing the subsidized office space, recording equipment and meeting rooms is demonstrating to Vernal’s young residents that there are alternative paths, said administrator Lori Haslem, who runs the Hub.

“In the past, young people figured they had to leave Vernal to have those kinds of jobs,” Haslem said. “They don’t have to do that anymore.” 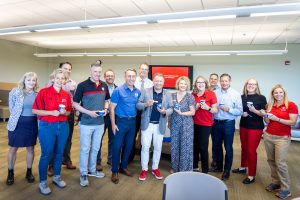 Leaders of Utah State University’s extension on Aggie Way also are working to embed higher education in the community and make it easier for disadvantaged students to attend college. Just under 500 undergraduate and graduate students are enrolled and another 300 high school students take concurrent enrollment classes.

“You’re always concerned about students who come through your doors and then, for whatever reason, they don’t complete,” said David Law, a professor and associate director of USU’s Roosevelt extension.

A few years ago, the extension launched a faculty-student mentor program which was expanded statewide to include up to 3,500 undergraduate students three years ago. The university also is partnering with the Uintah School District next door to build a preschool for up to 400 3- and 4-year-olds, the children of students and staff.

“The whole goal is to help our students feel like they belong here,” Law said.

“We do a lot of things to engage the community because we’re a part of the community,” said Robert Peterson, the campus’ associate director.