Uncovering the past at Stillwell Field

There are mysteries hiding under the grass at Fort Douglas.
Libby Mitchell - managing editor, @theU

Fort Douglas is a prominent architectural feature of the University of Utah. Over the years it has served as an active military base, an Armed Forces Reserve Center, and student housing. We all know it’s familiar landmarks like the Commander’s House, the post movie theater, and the chapel. But there are other features of the fort that are not visible to the naked eye. Instead they are buried underground, and in the past. 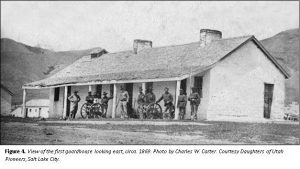 Charles Shepherd, Historical Architect with the university, knew from looking at historic maps and photos taken in the early days of the facility that there were buildings long since demolished. The question was where, and what was their purpose. A little digging found the answers.

“At the very beginning, they built three buildings at the West end of Stilwell Field,” he said. “The central one was a guard house, and then there were two other big buildings flanking it that were the ordnance buildings.”

From historical records it appeared the buildings were constructed in 1862 and stood for more than two decades before being demolished. But were there any remnants of them left? And if so, could they tell us any more about the history of the fort and the people who built it?

Chris Merritt of the Utah State Historic Preservation Office was ready to find the answers. Working with a crew the state and Cannon Heritage Consultants from Logan Merritt undertook a ground penetrating radar survey of the area where the buildings were believed to have stood in summer of 2019.

“It pretty clearly showed an intact foundation underneath the grass,” he said. “Our first test unit excavation came in right on top of the Western wall of the building and our Southeastern unit dropped right in on a corner, so the ground penetrating radar gave us the exact location where to dig. We didn’t have to waste time.”

The digging happened in the first week of October 2020. Merritt was on site with teams excavating the areas where the buildings once stood. And history began to reveal itself. “It wasn’t very deep, 12 to 16 inches, sort of in that range. And they immediately started finding stone and mortar and things like that,” said Shepherd. “They started finding these elements, that were these little twisted wire elements, and some other little metal pins. … kind of look like the twisted wires from the top of a wine bottle or something like that.” 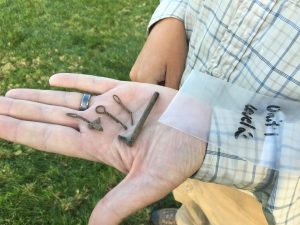 A little research by Merritt and team showed what the little metal bits actually were. “We found 19th century firing primers from canons,” said Merritt. “In the old days, they’d put a little brass tube with black powder in there and pull a string and it would ignite the black powder and fire the cannon found right on the top of the foundation.”

The October dig was only the beginning of uncovering what is hiding underground at Stillwell Field.  “The plan is to come back in a year or two, for a more extensive excavation to see what else they can learn,” said Shepherd.” “Bigger chunks of this foundation, dig deeper, make it a more robust excavation.”

On future digs it’s hoped the public can be more involved. “This year, because of COVID, we didn’t have a lot of public interaction just because we didn’t want to expose ourselves or the public to the virus,” said Merritt. “Hopefully next year we can go back and do a more extensive excavation of the building, and have tours where we’ll talk about the history of the Fort, and see what archeologists are doing.”